Most high-end car companies and supercar builders offer some kind of bespoke option for clients to really create something unique when they order their new car, Lamborghini has the Ad Personam studio while Bugatti Automobiles S.A.S. created their ‘Sur Mesure‘ program in 2021 to offer an extra level of personalization for customers, as if the massive list of ‘standard’ options isn’t enough, Sur Mesure, loosely translated as ‘tailormade’, takes us back to the past when coachbuilding was in style when customers just ordered a chassis and had a coachbuilder make a one-off body for them, these days the Sur Mesure program offers a true one on one experience between the client and Bugatti in Molsheim, the sheer number of exterior colors and leather finishes is nearly unlimited, but for those who wish to take a further step and create a truly unique piece of personalized automotive art, Bugatti Sur Mesure is at their disposal. 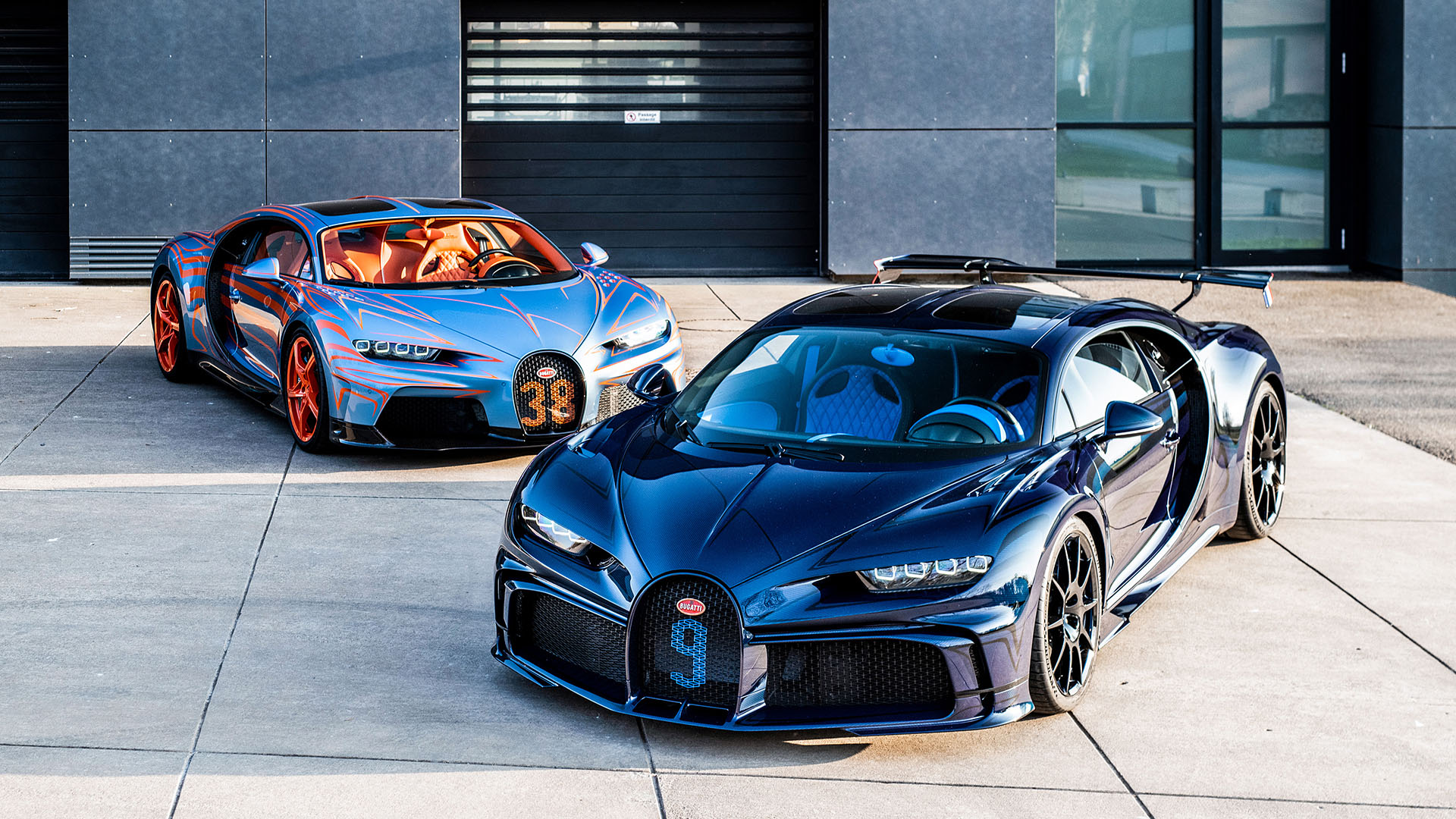 Sur Mesure takes the client all the way from the initial design concept through to vehicle production and final handover to get that full Molsheim experience Bugatti became famous for, and some customers like to get the latest and bravest, but don’t forget about the history, and that’s exactly what happened with these two Bugatti Chiron featuring the famous ‘Vague de Lumière’ paint pattern that harks back to a very special Bugatti Veyron created over a decade ago. 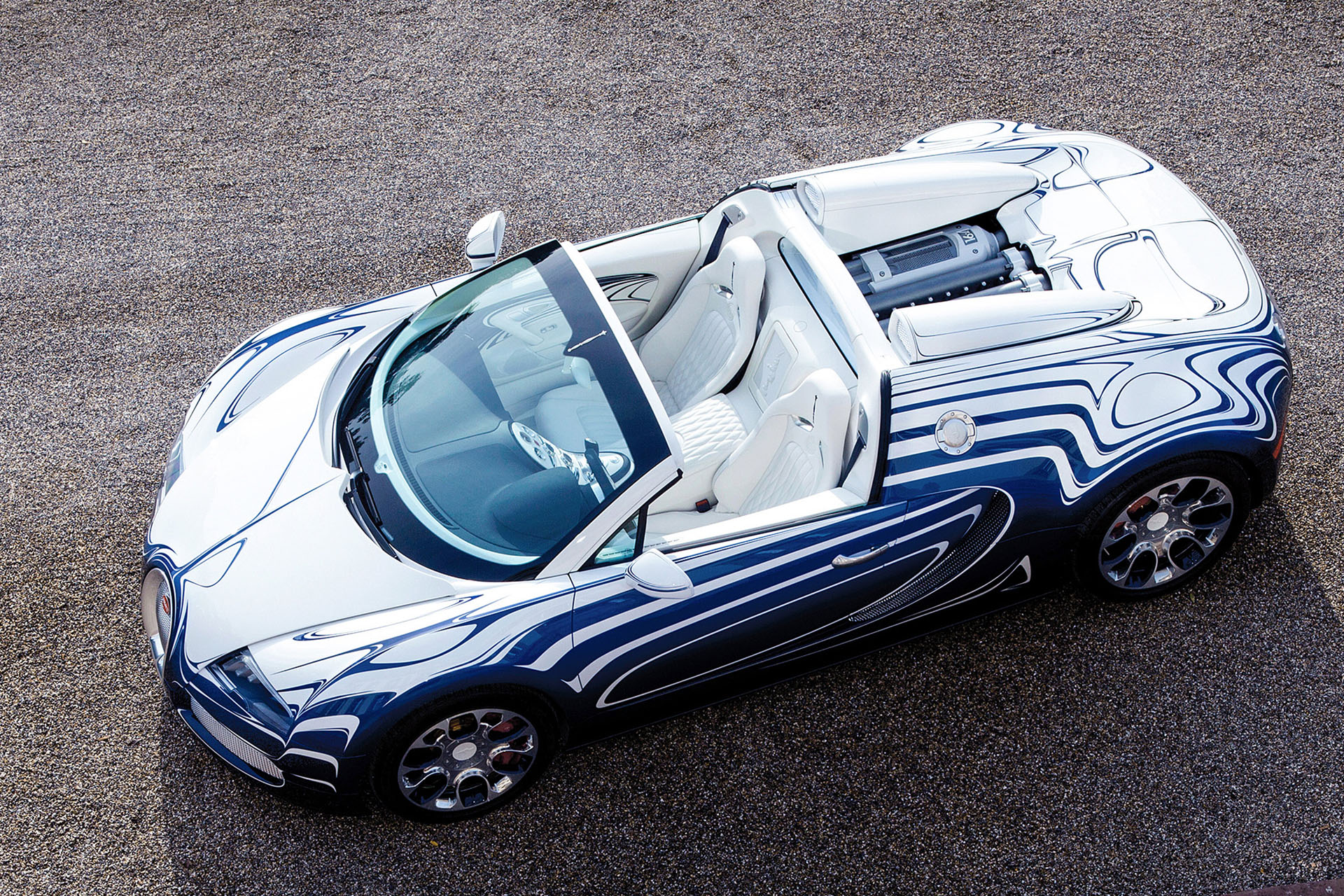 From the press release: In 2011, Bugatti revealed the Veyron 16.4 Grand Sport L’Or Blanc in partnership with the Königliche Porzellan-Manufaktur Berlin. Recreating the way natural reflections on the bodyshell ‘flow’ over the car, hand-painted lines were applied to the Veyron’s sweeping curves in a powerful Blue shade. Later in 2019, Bugatti produced the Chiron ‘Zebra 1 of 1’ in a unique Titanic Blue and Gunpowder Grey theme painted over three weeks and
also inspired by natural light. 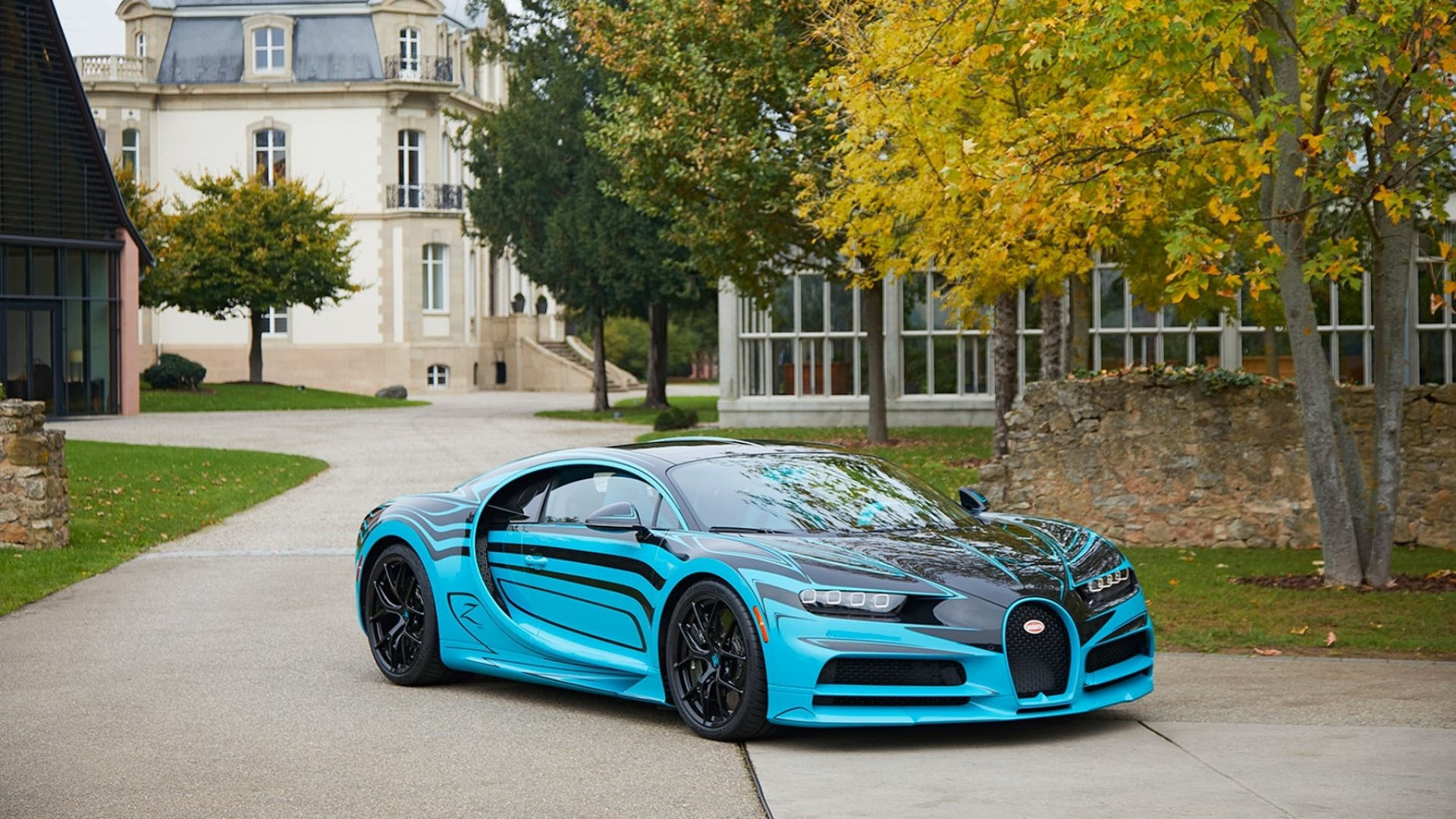 Two recent Bugatti Chiron that went through the Sur Mesure program took inspiration from the very special cars mentioned above, especially for their exterior look, and they now call it the ‘Vague de Lumière’ and it takes about 5 weeks to create … by hand. The Bugatti masters take the already intricate 2D shapes that form the ‘flowing light’ and put this onto the very sculpted body lines of a Bugatti Chiron, more specifically a Super Sport and a Pur Sport, once the pattern is fitted, the Bugatti craftsmanship comes into play when they hand-paint layer upon layer of contrast color to get to the end result that creates the illusion of light reflection, only to cover it all with a final series of clear coat layers. 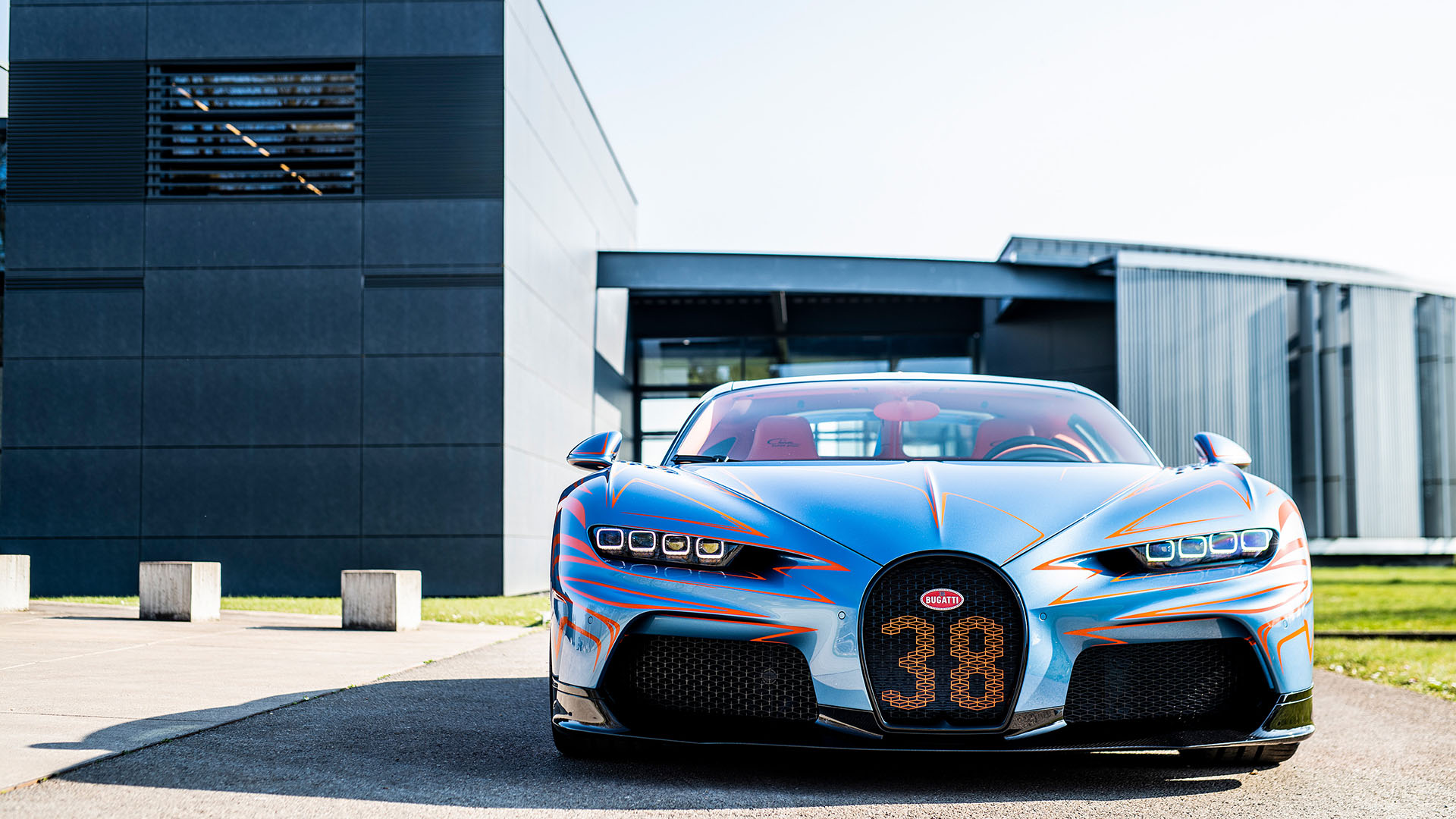 Because of the hand-painted aspect, each car that comes out of the Sur Mesure program with a Vague de Lumière pattern is unique as the paint on each one is individually applied and unique to each unit, and then we get to one of the very first Bugatti Chiron Super Sport units to be delivered to her customer, finished in a very beautiful California Blue, the Vague de Lumière pattern is applied in a very contrasting Arancia Mira, which as we already mentioned takes about 5 weeks to complete. 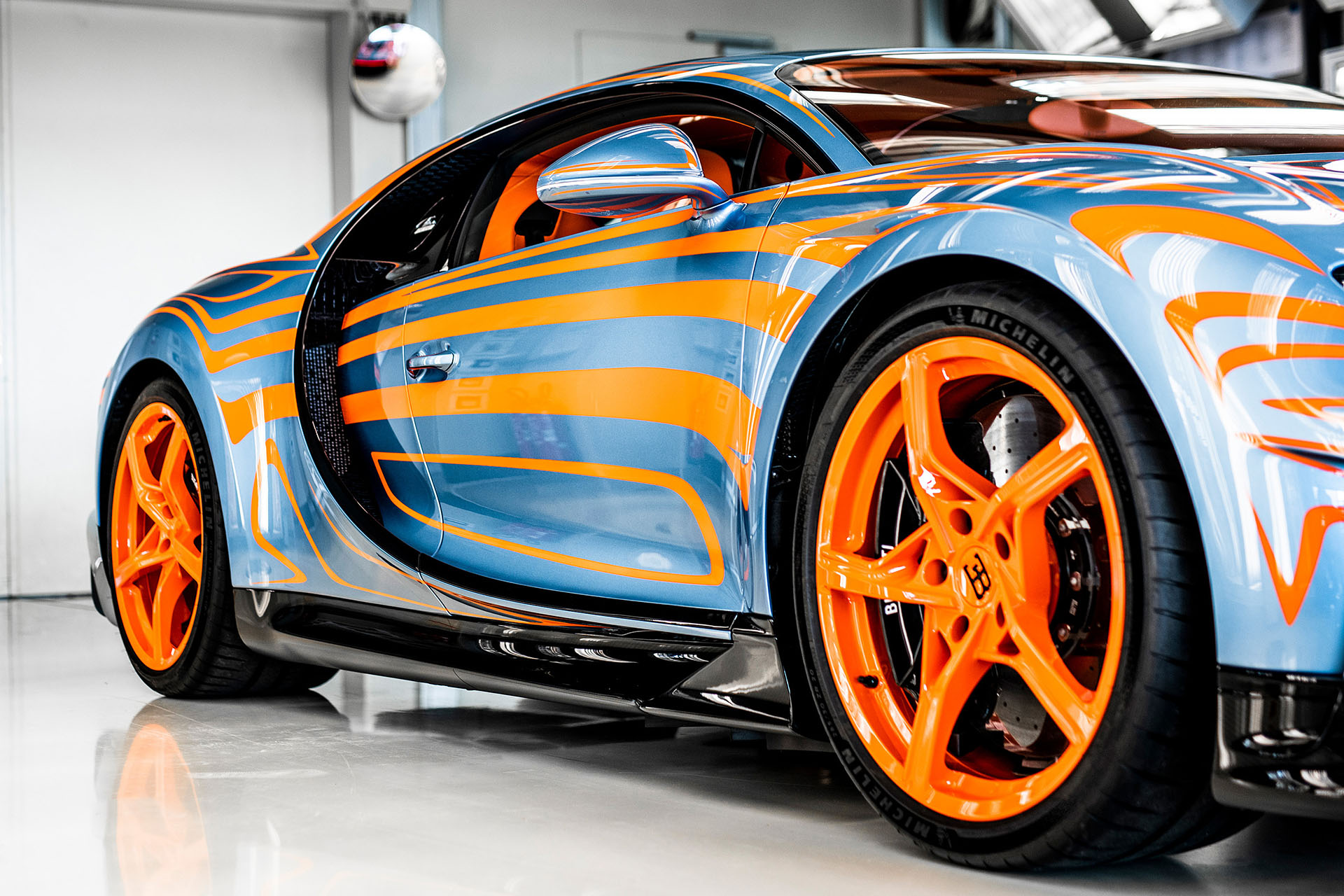 The owner decided to take the Arancio Mira theme further with color-coded, magnesium wheels, but also on the ’38’ featured inside the famous horseshoe grille at the front, as a final touch for the exterior, the lettering on the legendary W16 engine was done in the same orange shade, and then we open the door, only to be greeted by an absolutely stunning leather-filled interior inside this Gran Turismo focused hypercar, the Bugatti Chiron Super Sport has been designed for effortless cross-continental journeys in opulent luxury while remaining perfectly composed at its top speed of 440 km/h thanks to its unique longtail silhouette, as Bugatti puts it. 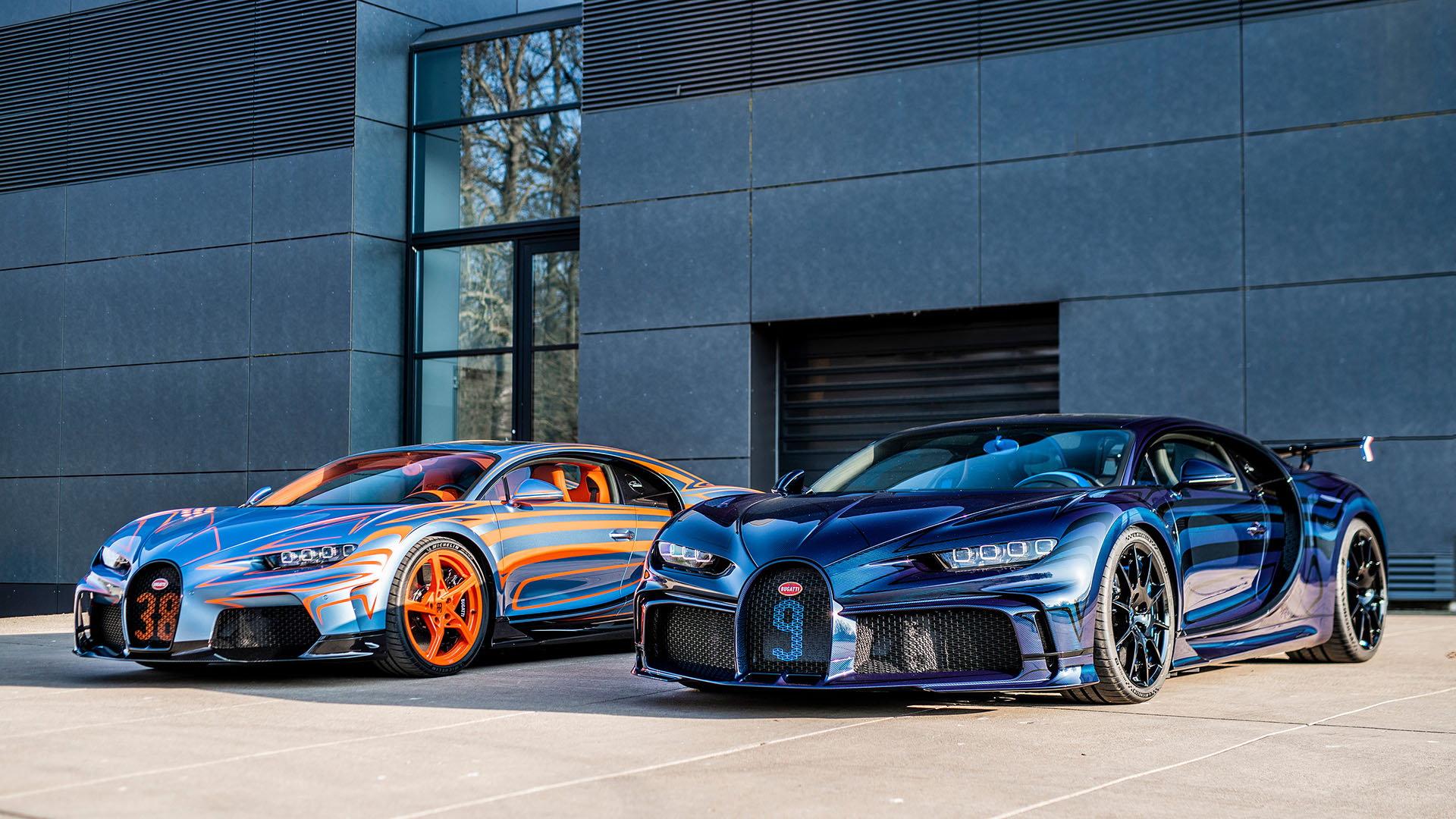 But there was a second car completed at about the same time as the aforementioned Super Sport, this time it’s the amazing Bugatti Chiron Pur Sport, which also happens to be ordered through the Sur Mesure program to get the special Vague de Lumière pattern, but with a twist, this car boasts clear carbon fiber bodywork instead of a painted base for the ‘light flowing’ pattern, but not just regular black carbon fiber, this specific one boasts an exposed Blue Carbon bodywork while those ‘stripes’ are done in Nocturne, making them look like those famous ‘ghost stripes’ we’ve seen on other cars, and personally, I love this style a lot more than the Super Sport with the high-contrast orange pattern. 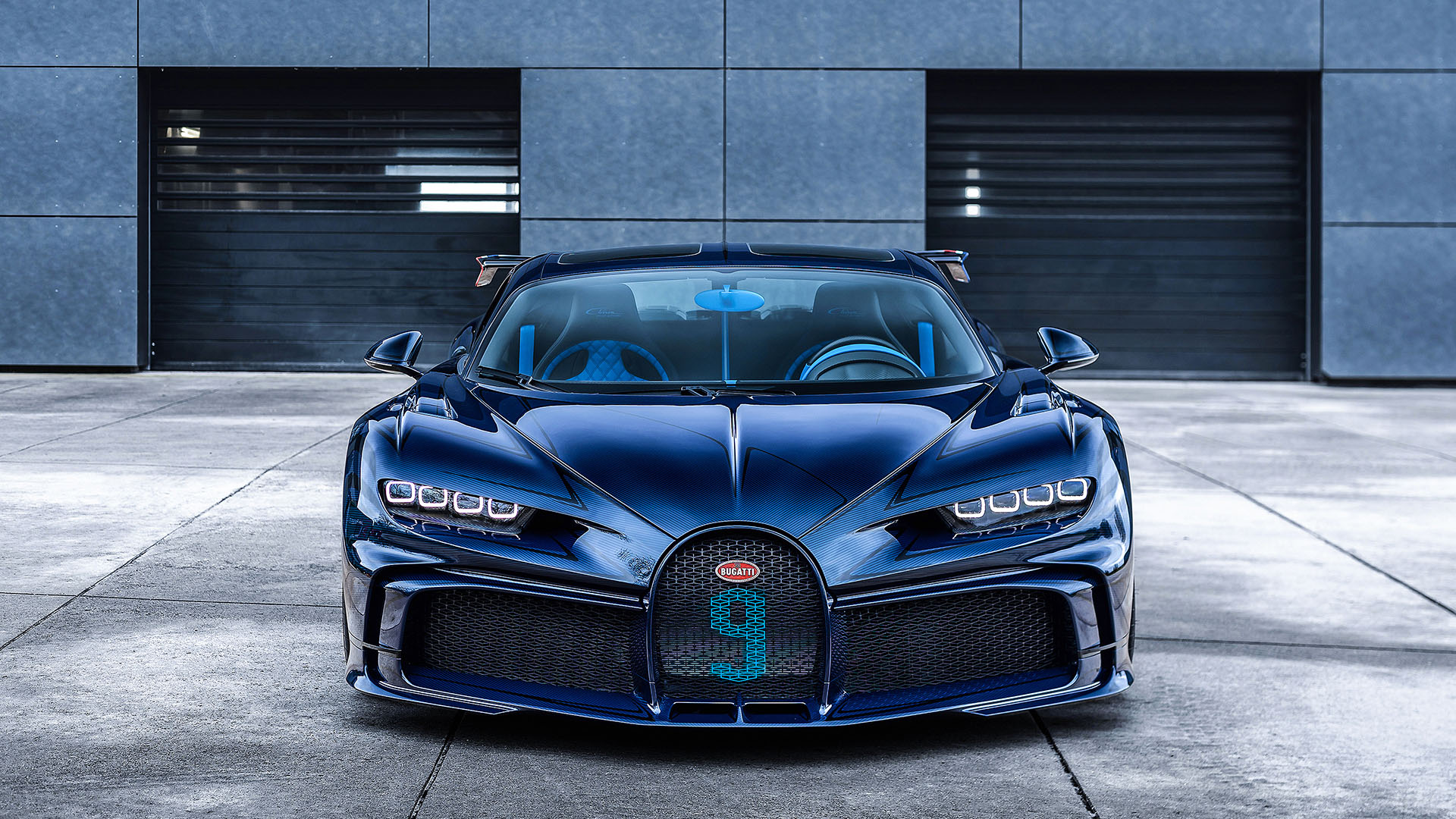 This blue Bugatti Chiron Pur Sport looks amazing in the overall dark blue scheme, I love clear carbon fiber, and even more so when it gets tinted like on this example, and then you notice the Vague de Lumière pattern ever so slightly, it makes this hypercar stand out, but in a good way, it draws attention for being different, but not ‘in your face’ like some other cars, I do appreciate all and every car out there, people’s tastes are different, and that’s a good thing, but I like it a little more subtle … if you can call a Chiron Pur Sport subtle that is. 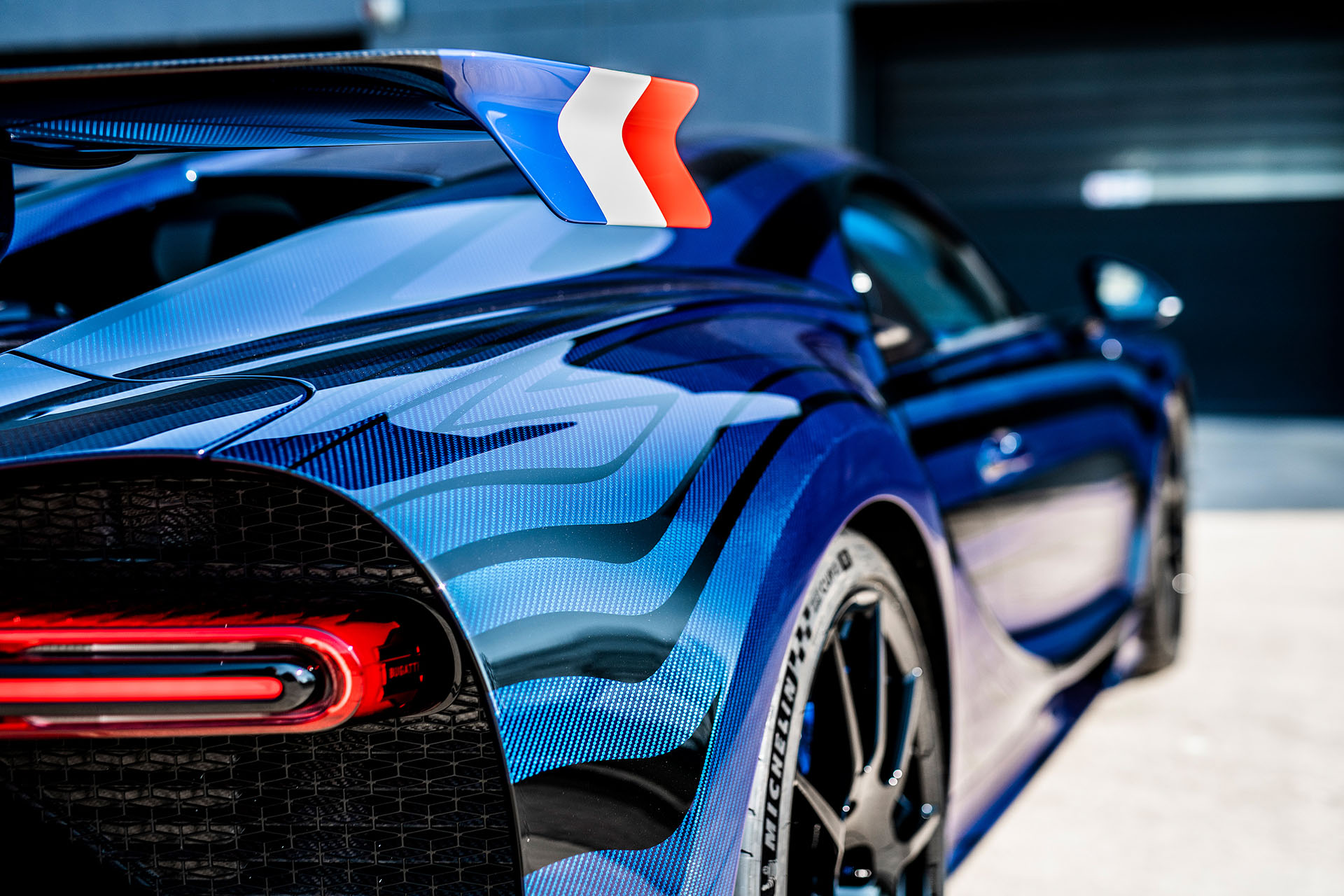 The interior inside this Blue Carbon Chiron Pur Sport gets adorned in a classic combination of multiple shades of blue, called Beluga Black and French Racing Blue, and it just looks so good, especially with the seatbelts being color-coded to the central part of the seats, that’s a very nice detail, but the client did specify some additional, special touches, for instance, the bright blue ‘9’ inside the front grille, but a touch of color has been added to the endplates of that large rear wing fitted to the Pur Sport version, it proudly boasts the French flag colors on this car, a very interesting touch on this French hypercar made in the Molsheim Atelier. 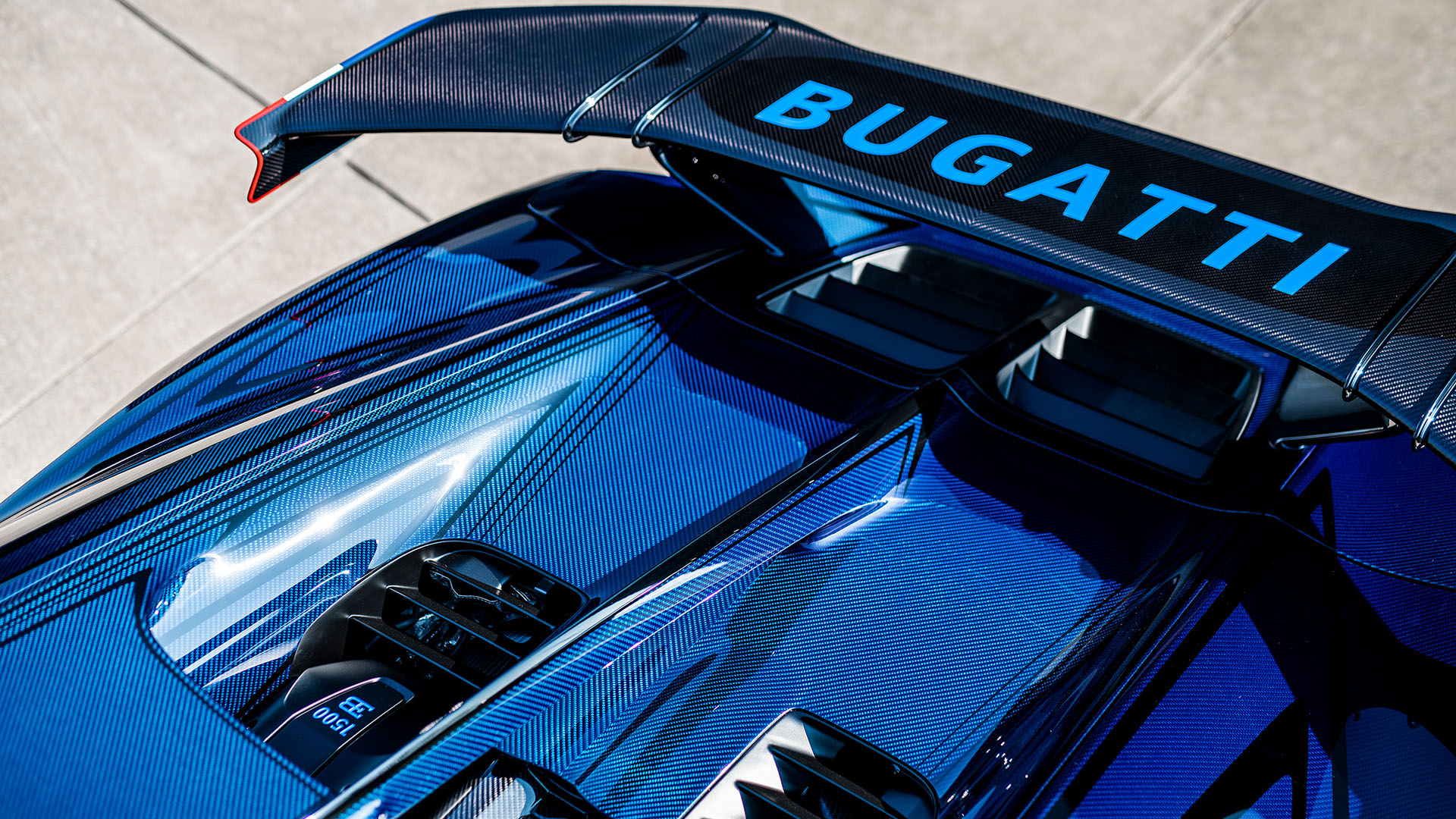 Christophe Piochon, President of Bugatti, said: “The ‘Vague de Lumiére’ paintwork applied to these two examples of our hyper sports cars embodies Bugatti’s fundamental philosophies; craftsmanship, innovation and heritage. We are always striving to enhance the Bugatti customer experience, from point of enquiry through to final handover and aftersales services, to levels never before offered in the automotive world. I’m truly excited to witness what our customers, alongside the Sur Mesure team, create in the years to come”.

For now, let’s enjoy some more photos of these amazing automotive works of art: 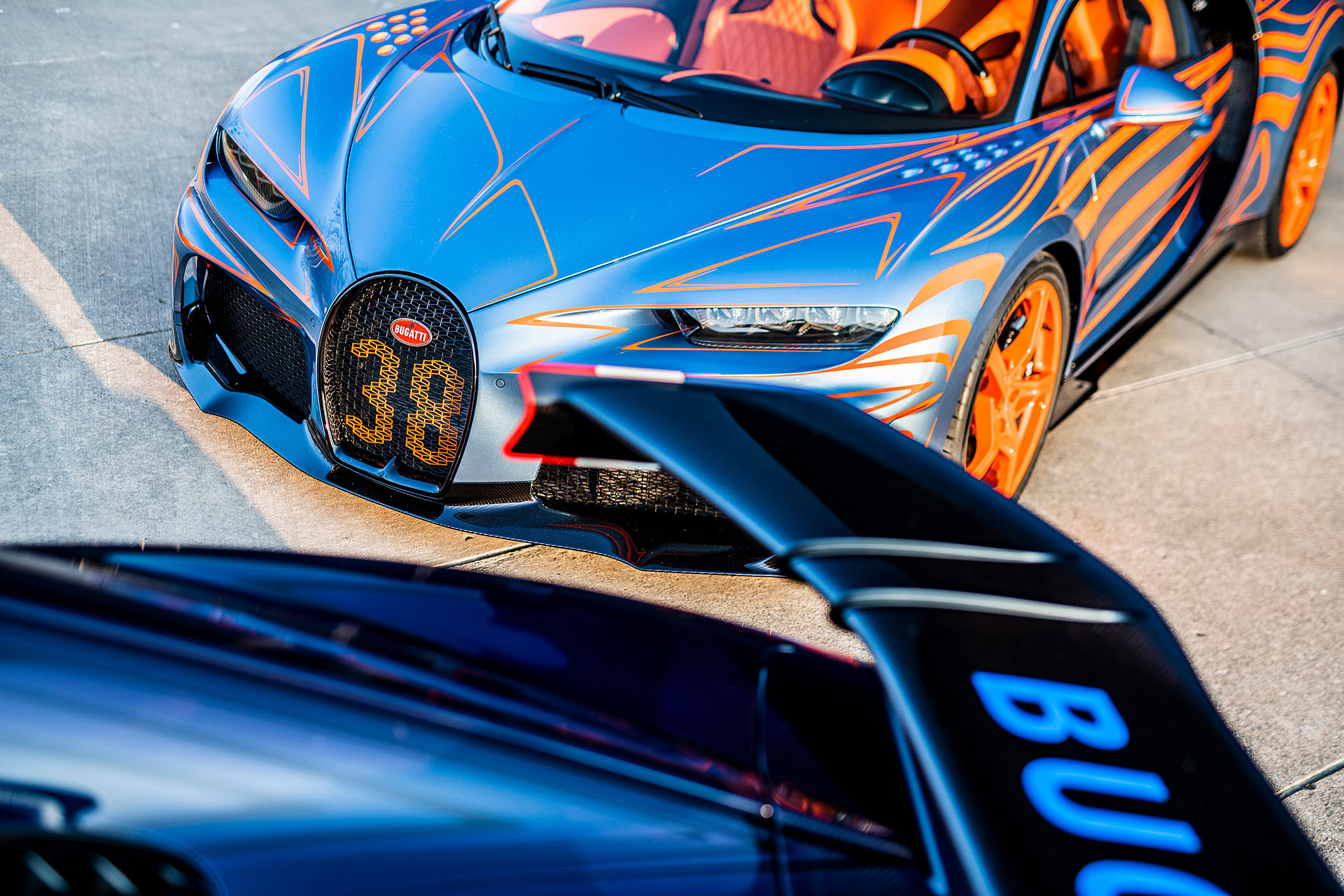 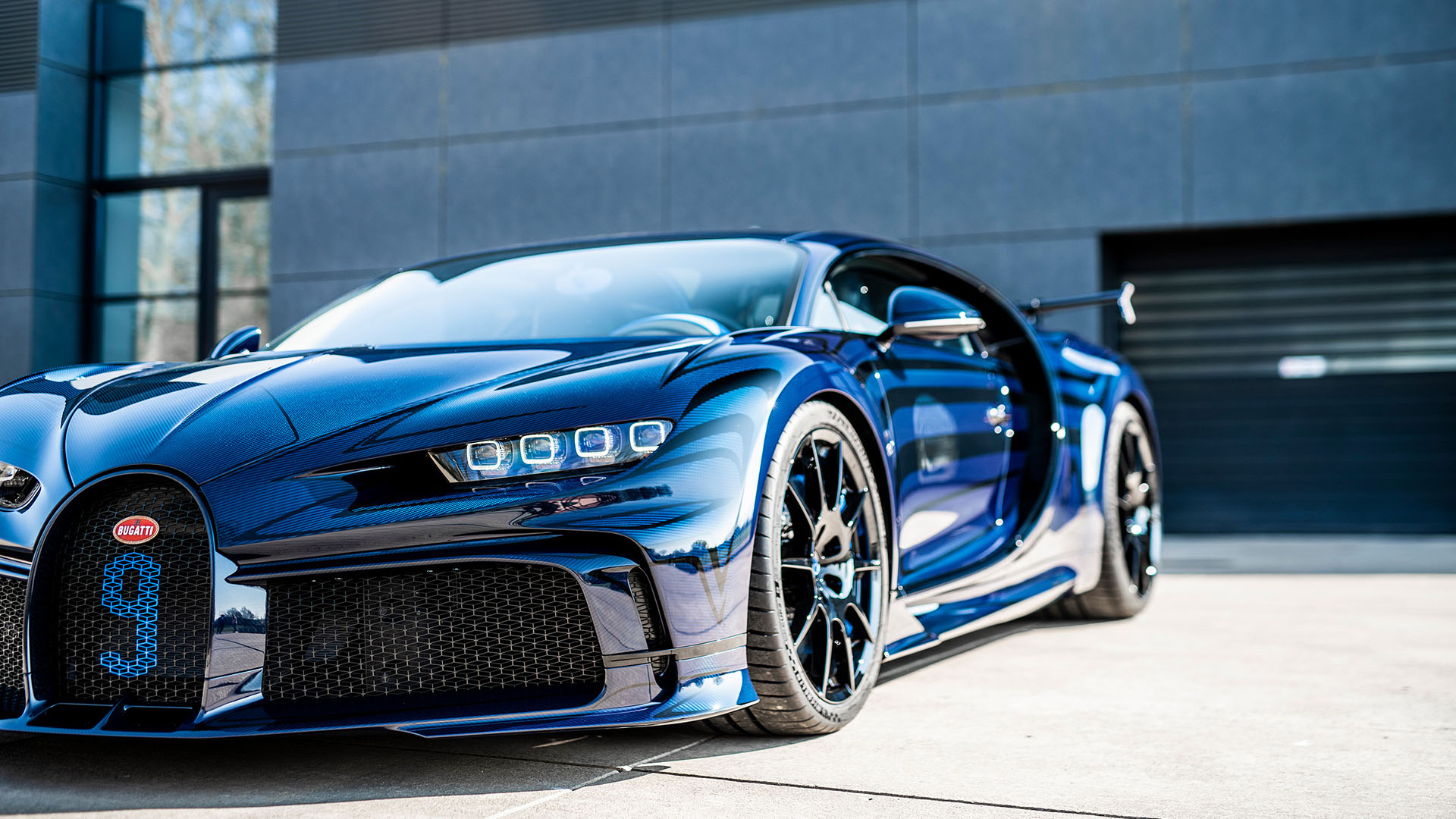 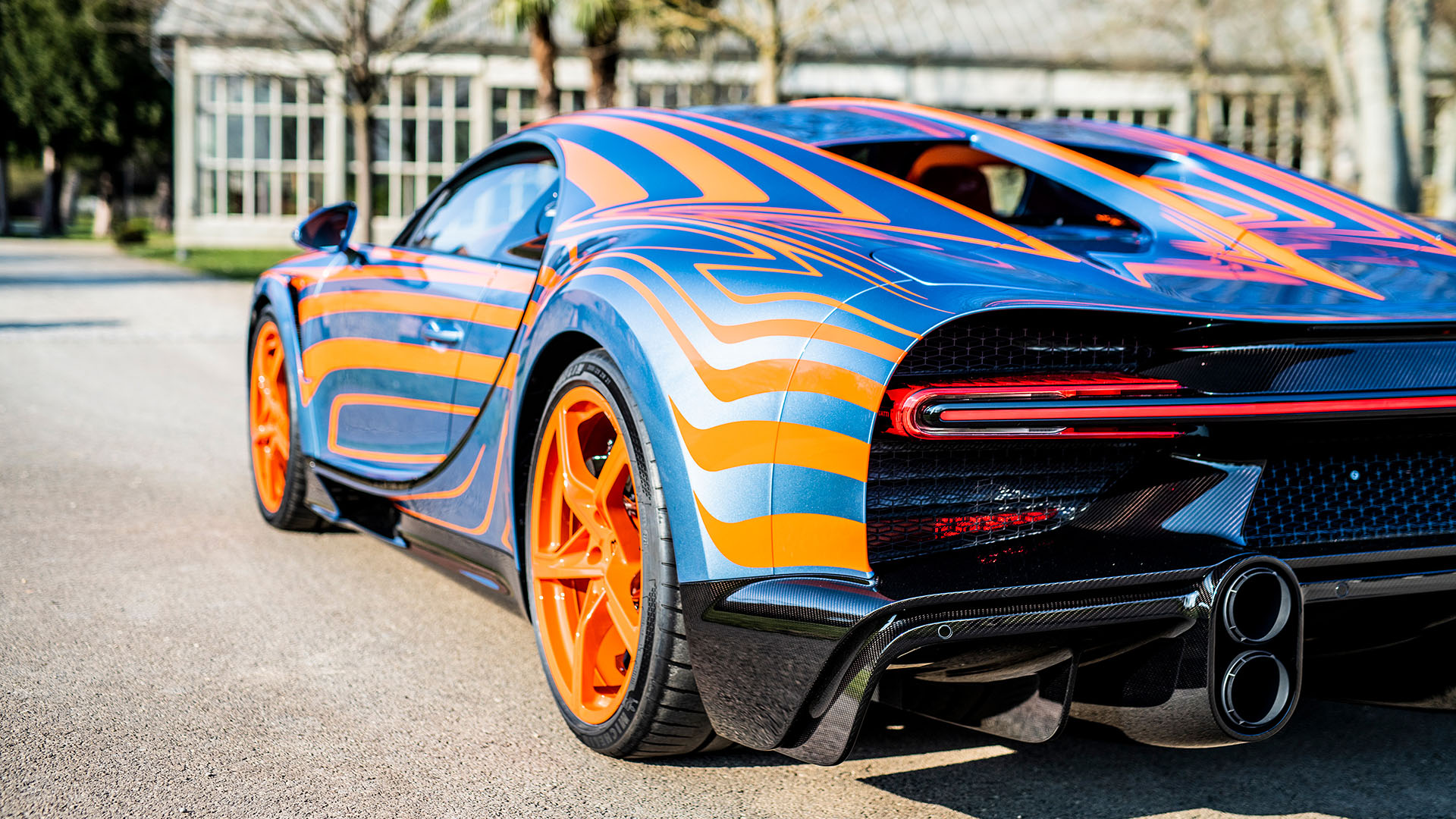 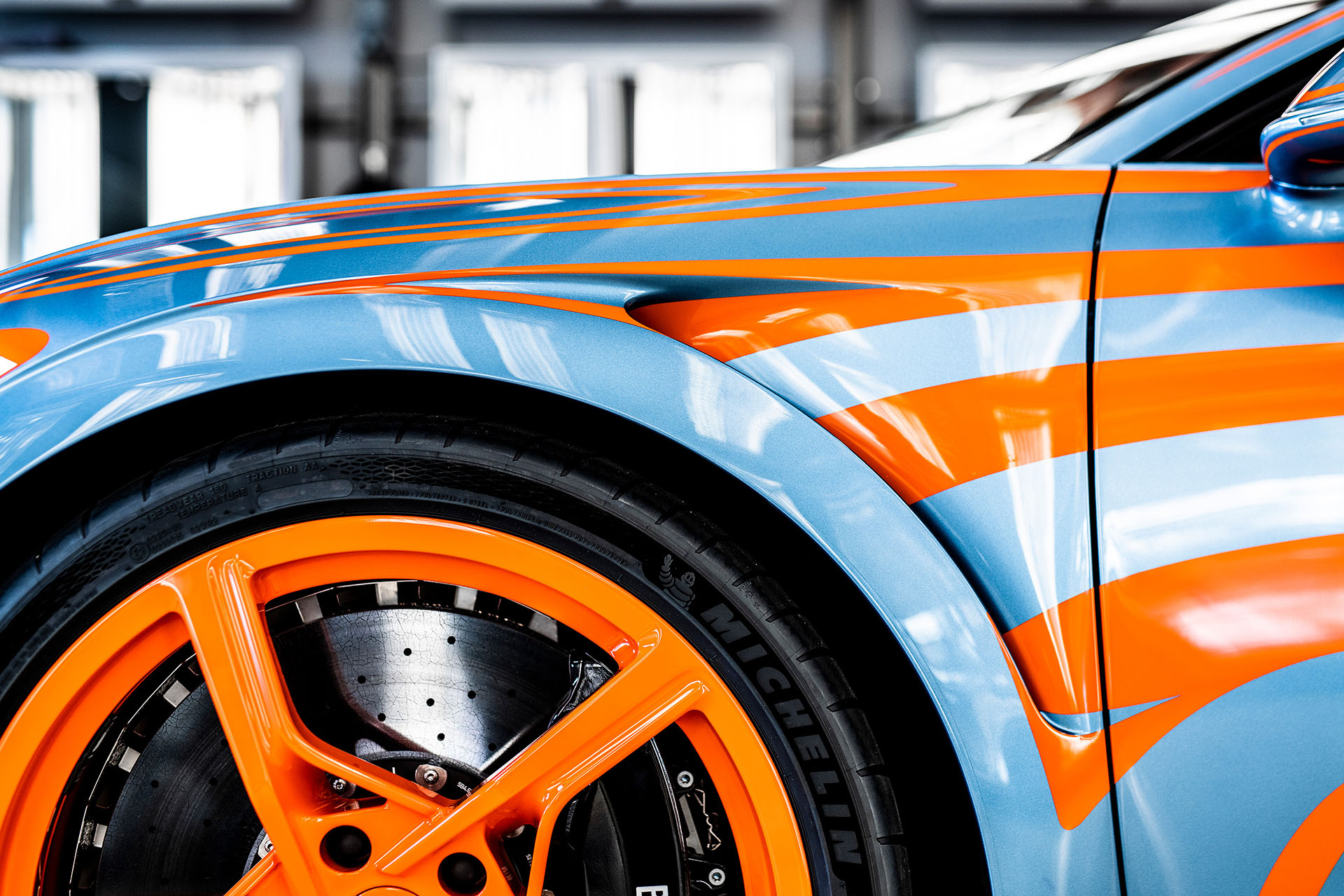 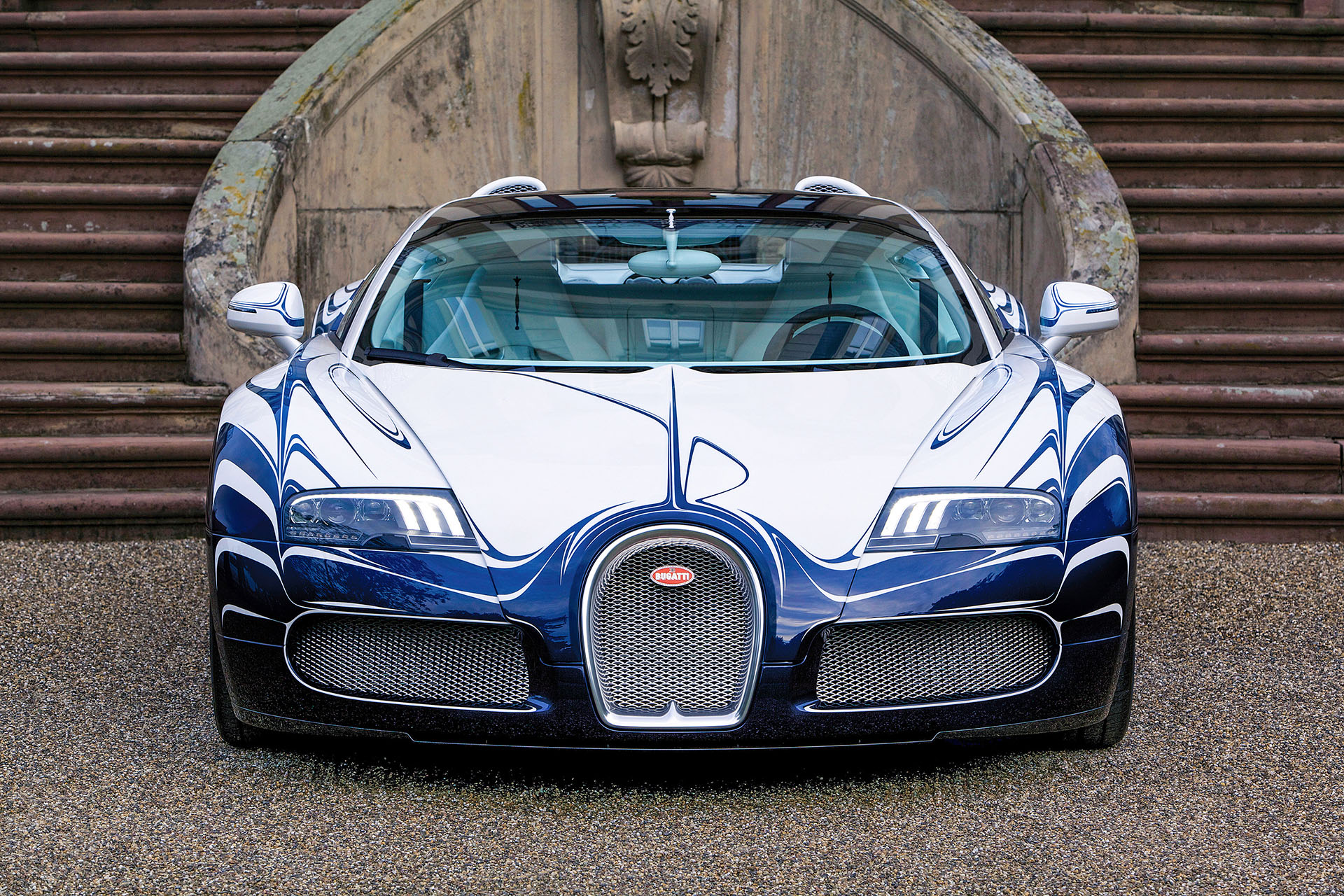 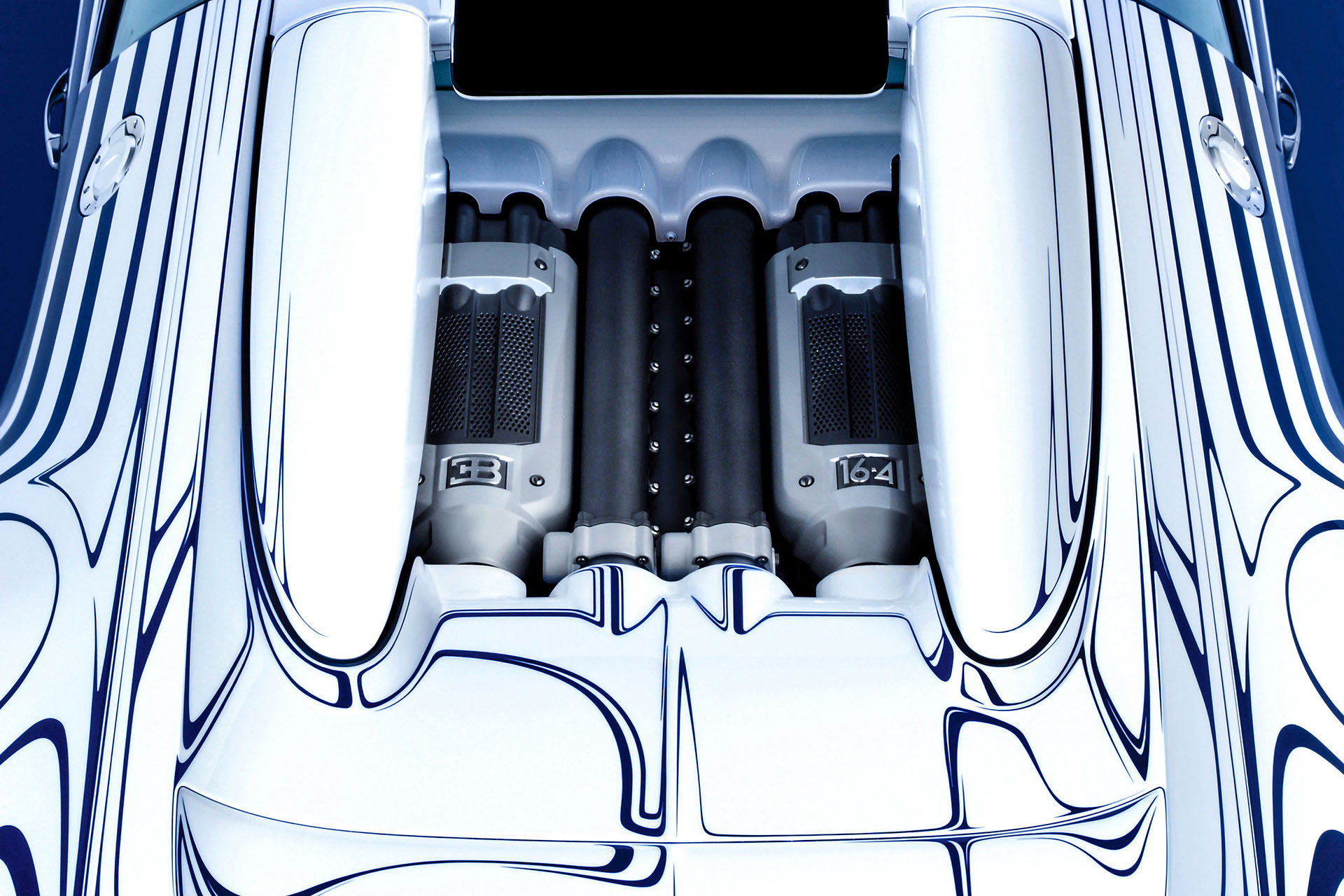 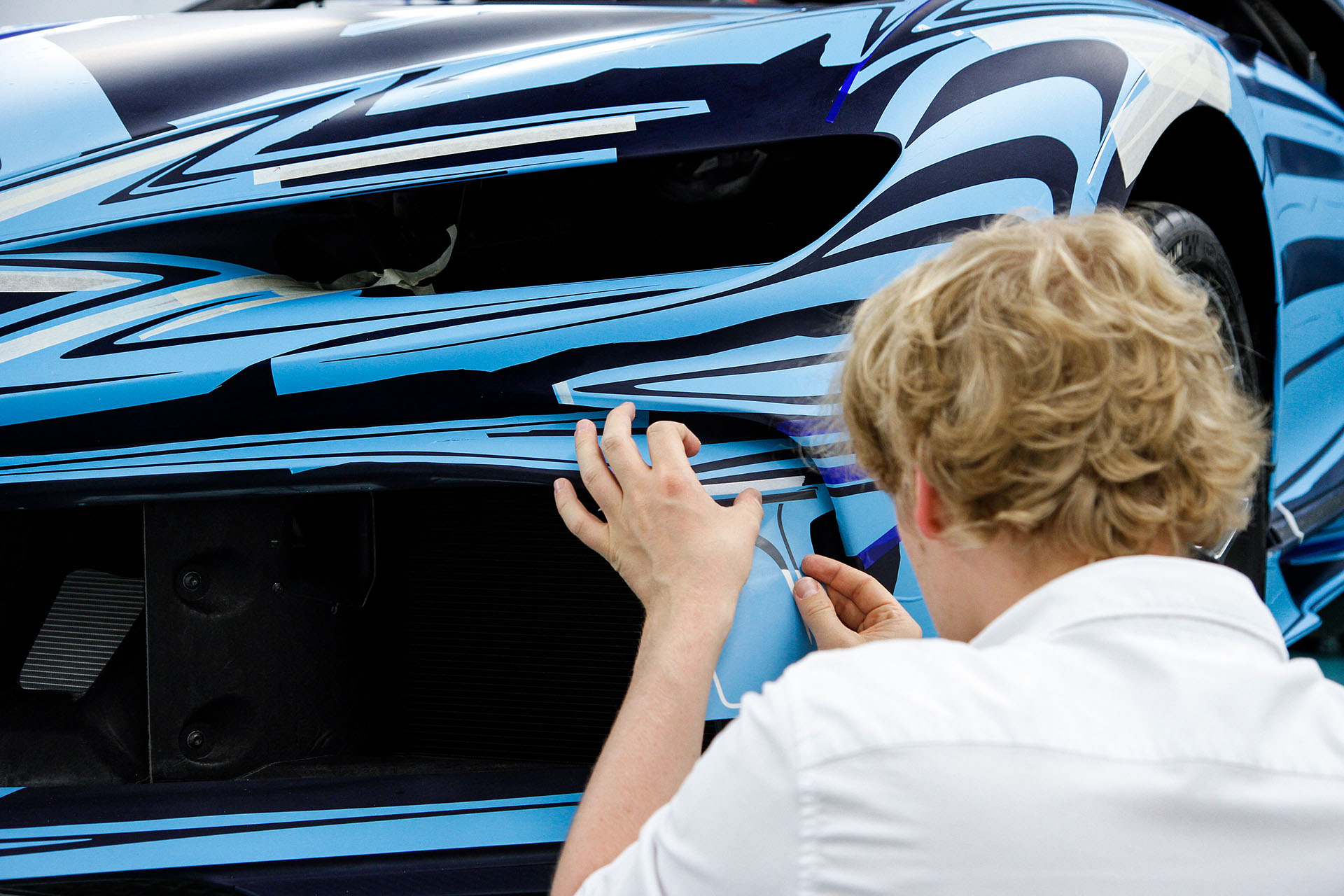 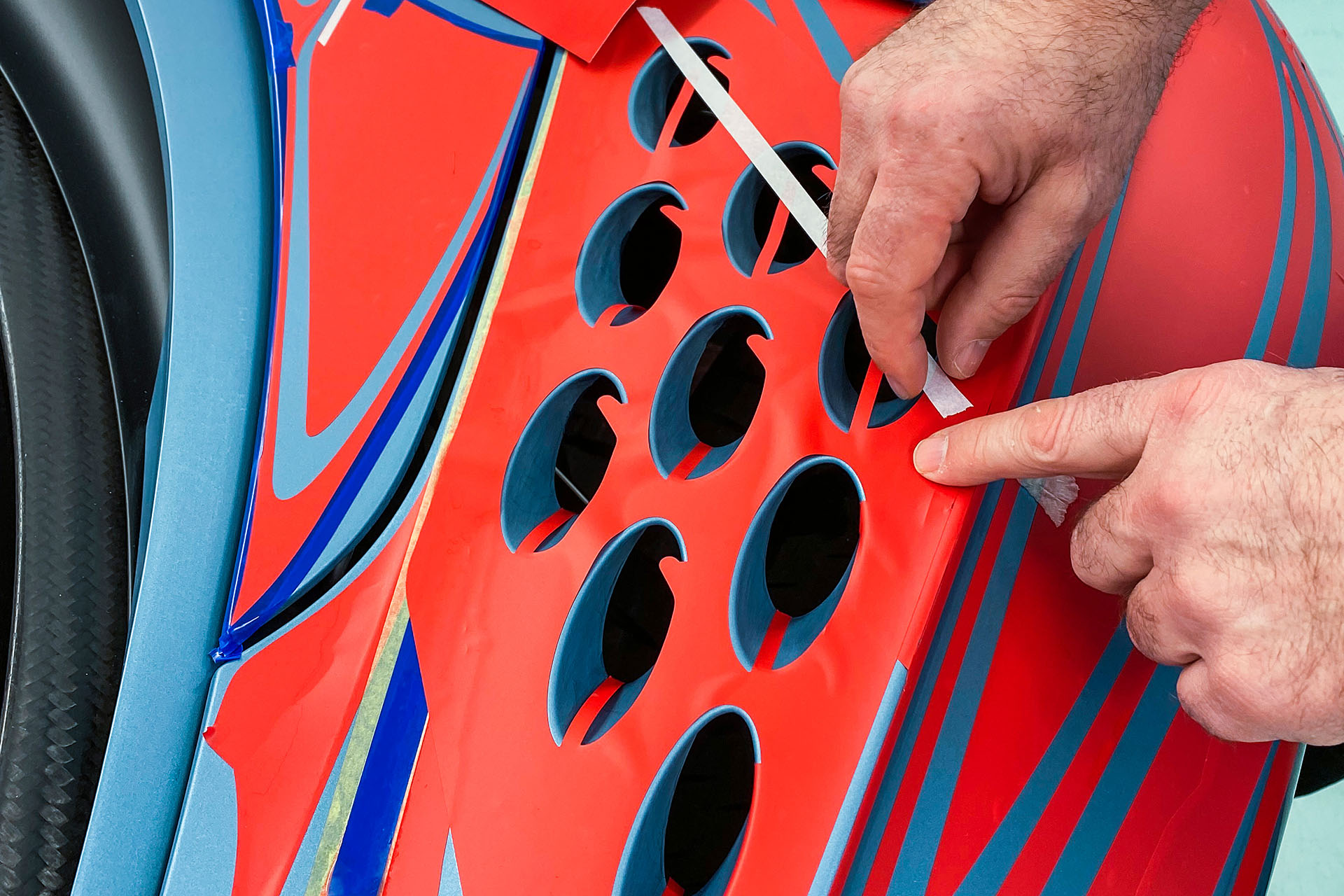