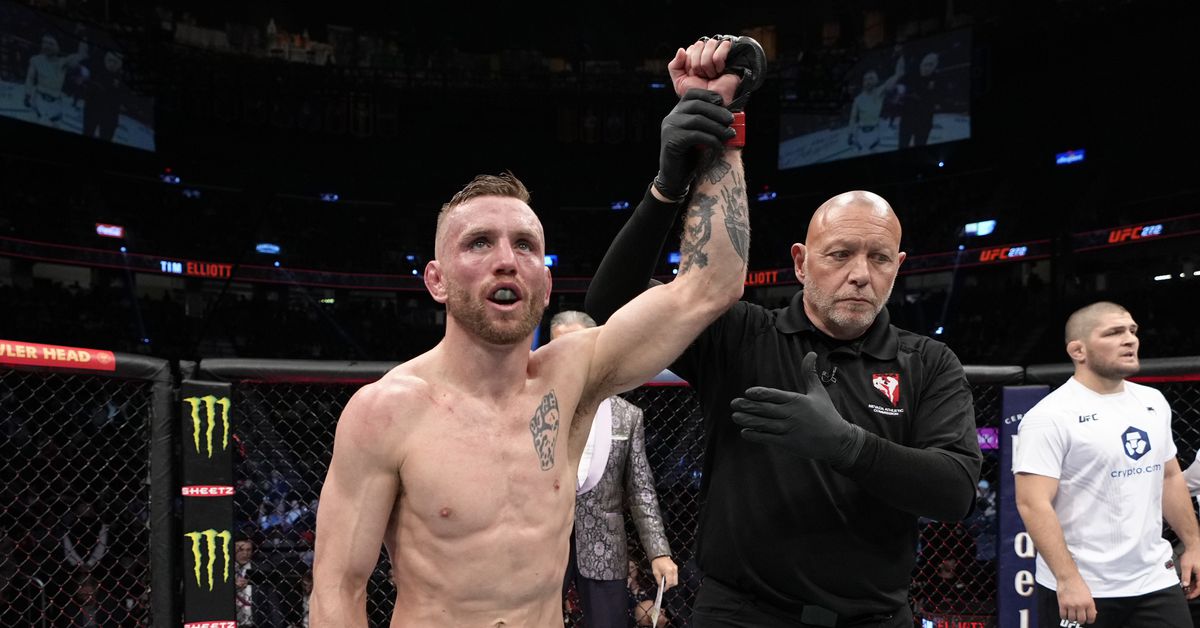 Tim Elliott is not sorry for the way he performed during his win at UFC 272, whether you like it or not.

Elliott picked up an upset win over Tagir Ulanbekov during the preliminary card of the UFC’s pay-per-view even earlier this month. During the fight, the former title challenger was shown grabbing the glove of Ulanbekov, which Elliott admitted to doing without hesitation.

One person who was quite angry about it was Ulanbekov’s cornerman and coach Khabib Nurmagomedov, who was shown screaming at referee Chris Tagnoni. Elliott didn’t hear the soon-to-be UFC Hall of Famer, and still wouldn’t change a thing.

“I’ve seen some memes, but I’m really good at pinpointing James Krause’s voice,” Elliott told MMA Fighting on the latest episode of We Got Next. “I feel like I can only hear him in there, it’s just him and I. We’ve got a good chemistry right now. But [Khabib will] be fine.

“If you’ve ever been in a fight — and maybe I’m different — I’m trying to win, man. It’s the referee’s job to step in there if I’m doing something wrong. He was telling me all kinds of s***, he told me to let go of the glove and I let go of the glove. But for me, it’s not that big of a deal. I’m in there fist fighting. People are going on and on about the morality of the sport and the warrior spirit and all of that bulls***, but I don’t f****** care. I’m not a martial artist — I’m a fighter and this is my job. I’m trying to make money at this job, and that’s what I did [at UFC 272].”

UFC 272 was an event that had a lot of storylines in the aftermath, but it seemed like there was some sort of foul — seen or missed — in almost every fight on the card. In the end, only one point was taken away throughout the night — on a second eye poke from Kennedy Nzechukwu in his split decision loss to Nicolae Negumereanu.

If the referee isn’t going to take points away, what’s to stop a fighter from finding an extra advantage? In the current landscape and pay structure that the UFC implements towards most of the roster, there really isn’t.

“For me, it’s not an issue,” Elliott explained. “The bosses don’t care, Dana White doesn’t care, Mick Maynard — I’m good with all those guys. They had no problem cutting my checks, cheating or not cheating. I sleep fine at night and a lot more comfortably now that I have money in the bank.

“But it happens all the time and it’s going to happen. I was sparring today and I got poked in the eyes, I got my glove grabbed, I got head butted, got scratched, and these are my friends, these are my teammates. It happens, and everybody knows that. I don’t know — even in basketball, if you slap the hand it’s part of the ball. You can’t tell me you’re not in there grabbing everything you can. I don’t want to get into any arguments about it, I’m just going out there trying to put on a show and trying to win.”

Elliott has now won three of four as he looks to climb the rankings of the exciting flyweight division. The 35-year-old is hoping for an active year and a return to the octagon after his fiancé Gina Mazany takes on Shanna Young at the UFC’s event on April 30.

What stood out the most about Elliott’s win over Ulanbekov was the fact that there were no surprises, thanks to the preparation he had with his head coach at Glory MMA.

“The coolest part for me was that everything that happened in that fight, James Krause and I worked on it specifically,” Elliott said. “There was not a moment — even when he had my back, I knew he was going to be tough on the back and we worked a ton of back escapes, although I didn’t get away, that choke was tight, and he may have gotten me with that choke had I not had the camp I had. I couldn’t be more happy with the results, and with that camp, and my team. What a great weekend [it was].”