It seems making limited-edition versions of existing production cars is the way to go these days, just about every car maker has been doing this marketing trick for a while now, and it seems the multitude of Ford GT ‘specials’ isn’t done yet, as Ford just released another one, this time the Ford GT Holman Moody Heritage Edition, as an homage to the GT40 MK II race car that completed the famous 1-2-3 sweep at the 24 Hours of Le Mans in 1966. 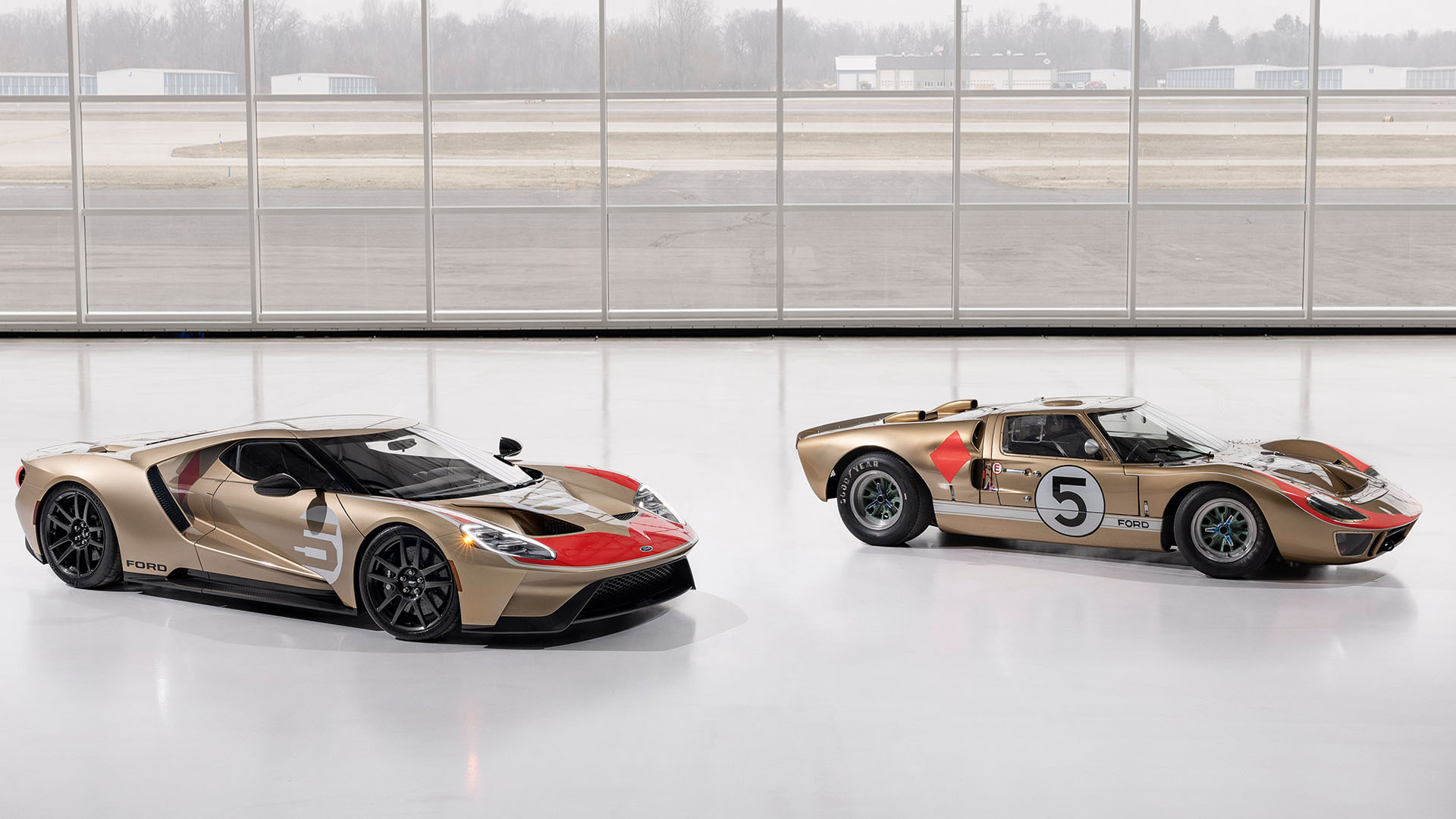 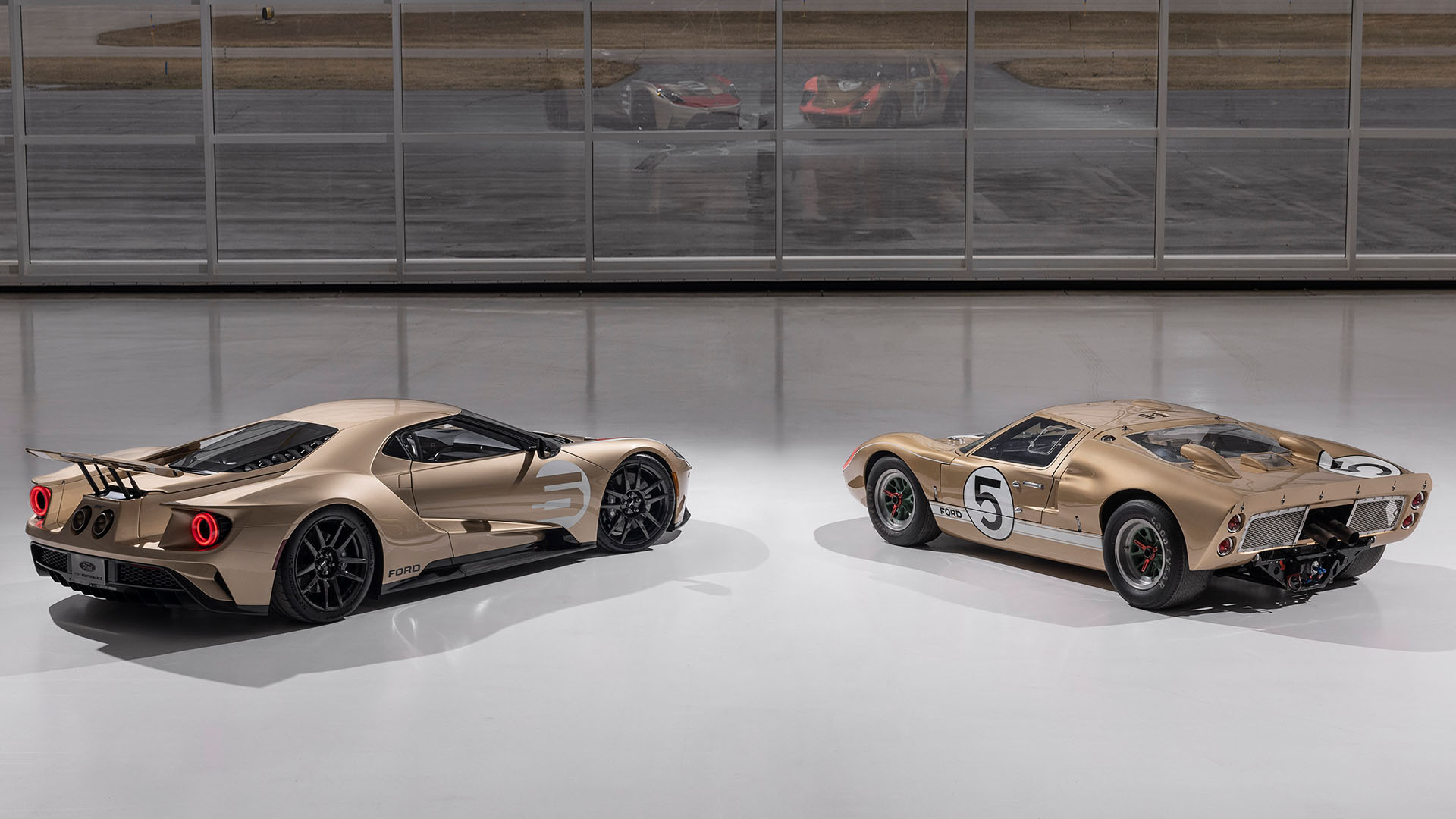 The ultra-limited-production GT Holman Moody Edition supercar will be on display at the 2022 New York International Auto Show side-by-side with the podium-placing Holman Moody Ford GT40 MK II, chassis No. P/1016, in fact, the Holman Moody racing team had a critical role in the GT40’s racing successes, after the 1965 Le Mans race, they took the task of reworking the GT40 MkII into the race-winning version we’ve seen in 1966, together with Shelby American, Holman Moody took chassis P/1016 over a total of 265 laps in just 8 days as a driving laboratory, a test-mule so to speak, during which they redesigned the brakes, suspension, and even the tire setup … they even experimented with an automatic gearbox to see if that would improve lap times. 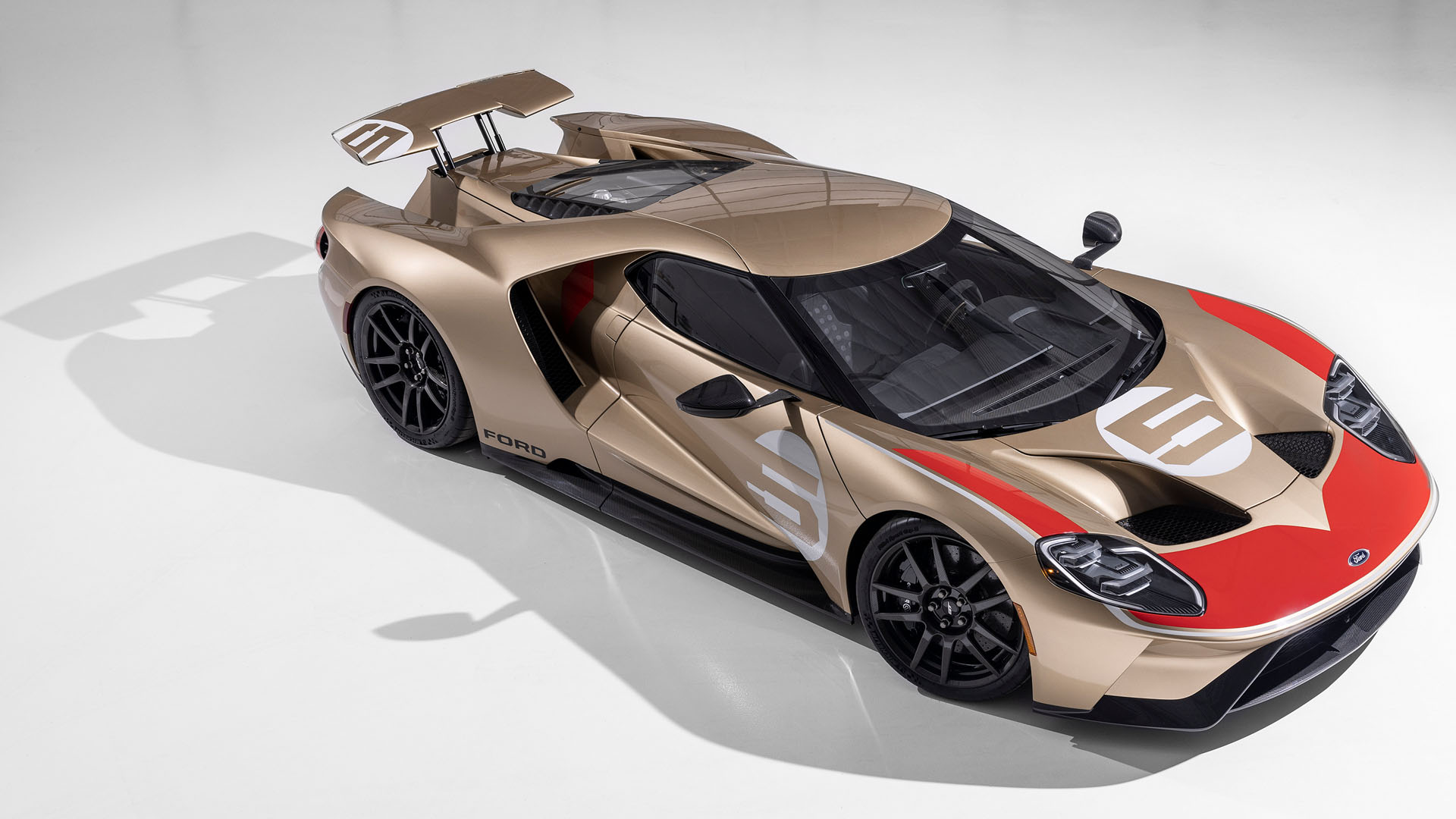 Just like the 1966 race car, this new 2022 Ford GT Holman Moody Edition is finished in a unique combination of gold and red and even features the number 5 in a stylish, Oxford White roundel on the doors, the hood, and the rear wing, to mimic the classic racer, but the visible carbon fiber parts on the 2022 model weren’t used back in 1966, neither were massive, carbon fiber 20-inch wheels, front splitter, side sills, mirrors, the engine louvers, and the beautiful rear diffuser. 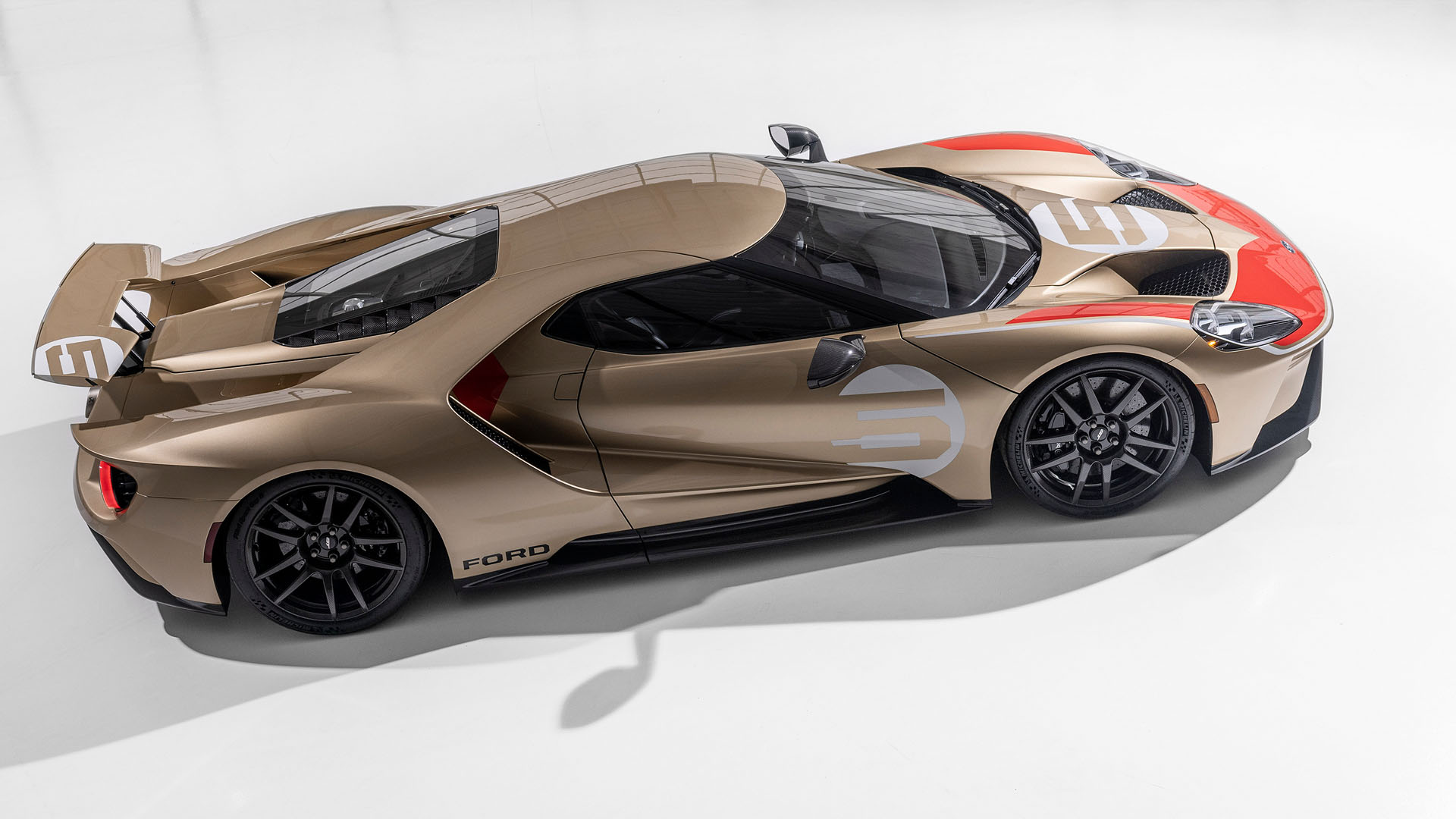 To really make this modern interpretation as close as possible to the looks of the 1966 car, Ford opted for black painted Brembo® brake calipers with silver lettering, add the black lug nuts and you’ll end up with an amazing looking combination on its highly limited production Ford GT for the 21t century. 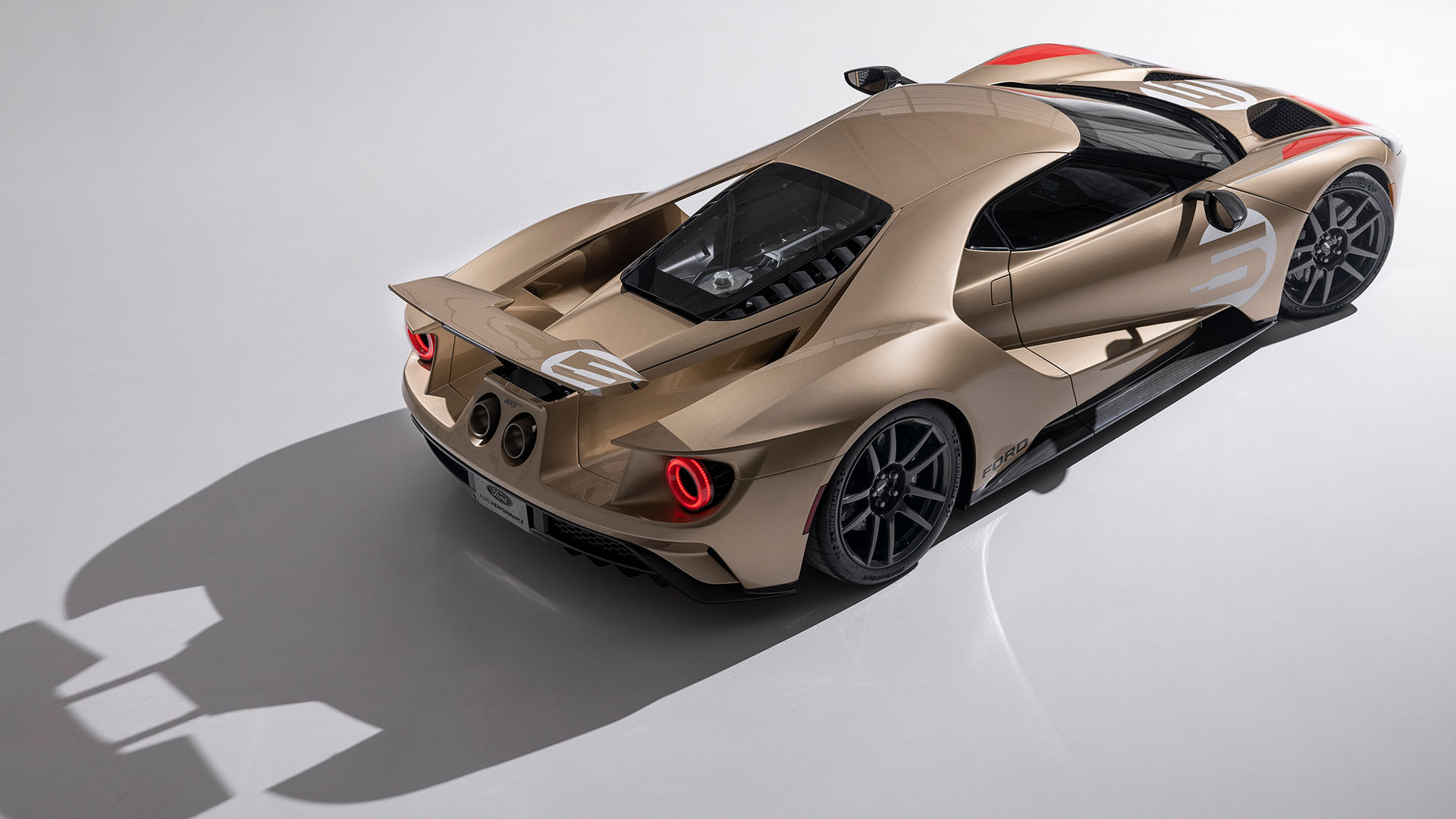 On the inside, the very special options continue with a lot of exposed carbon fiber being prominent on the door sills, the console, and the dials, and we even find an nr 5 roundel on the door panels to make it extra special while being seated in the Ebony Alcantara®-wrapped carbon fiber seats feature gold accent stitching with the famous GT logo embossed on the headrests, the dashboard binnacle comes in a combination of both leather and Alcantara® in matching Ebony hue, the headliner and window pillars are covered in pure Alcantara®. 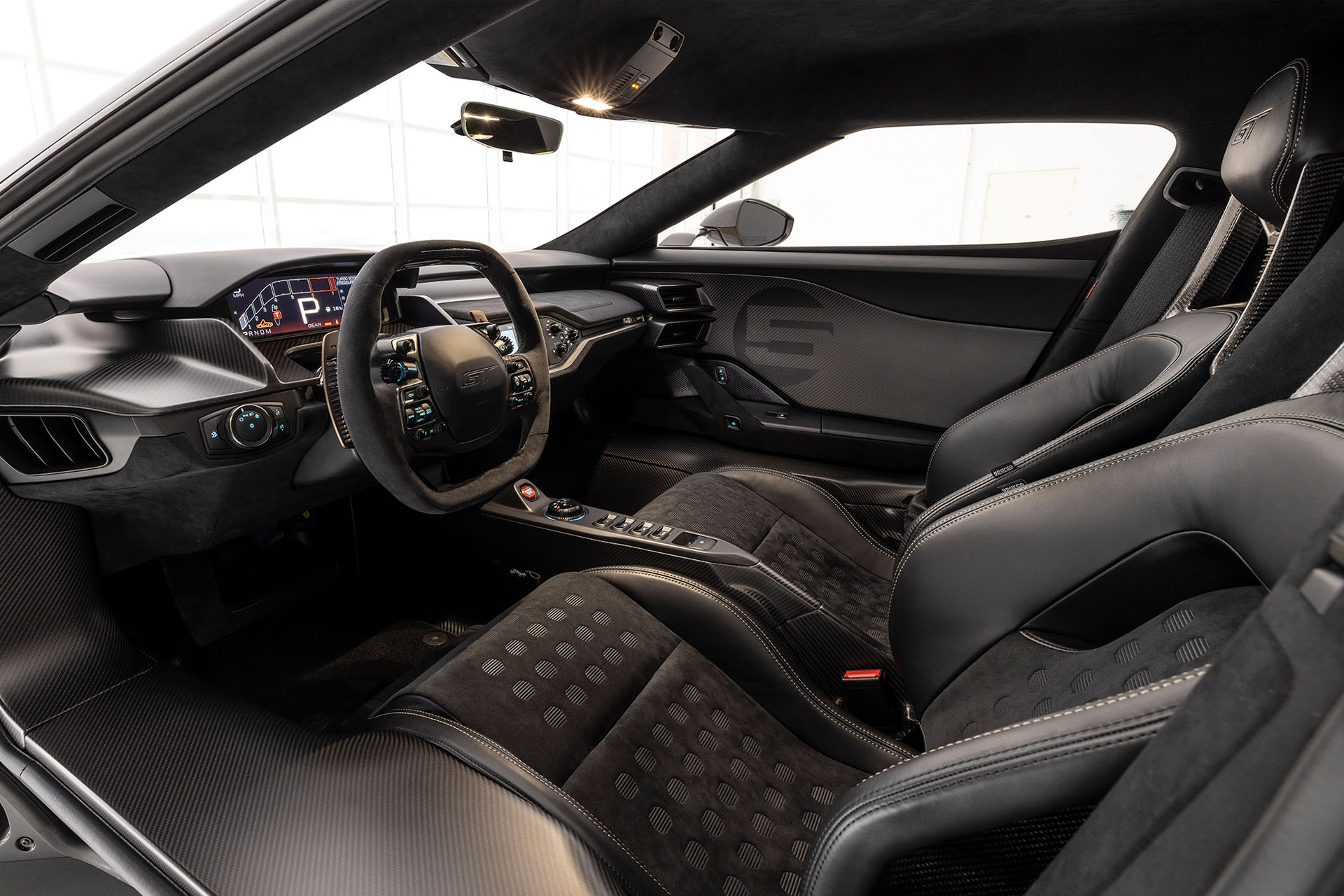 This surely isn’t the first Heritage Edition of the new Ford GT, let’s take a look at what has come before this new one:

Some more photos of this new limited-edition model on the beautiful Ford GT: 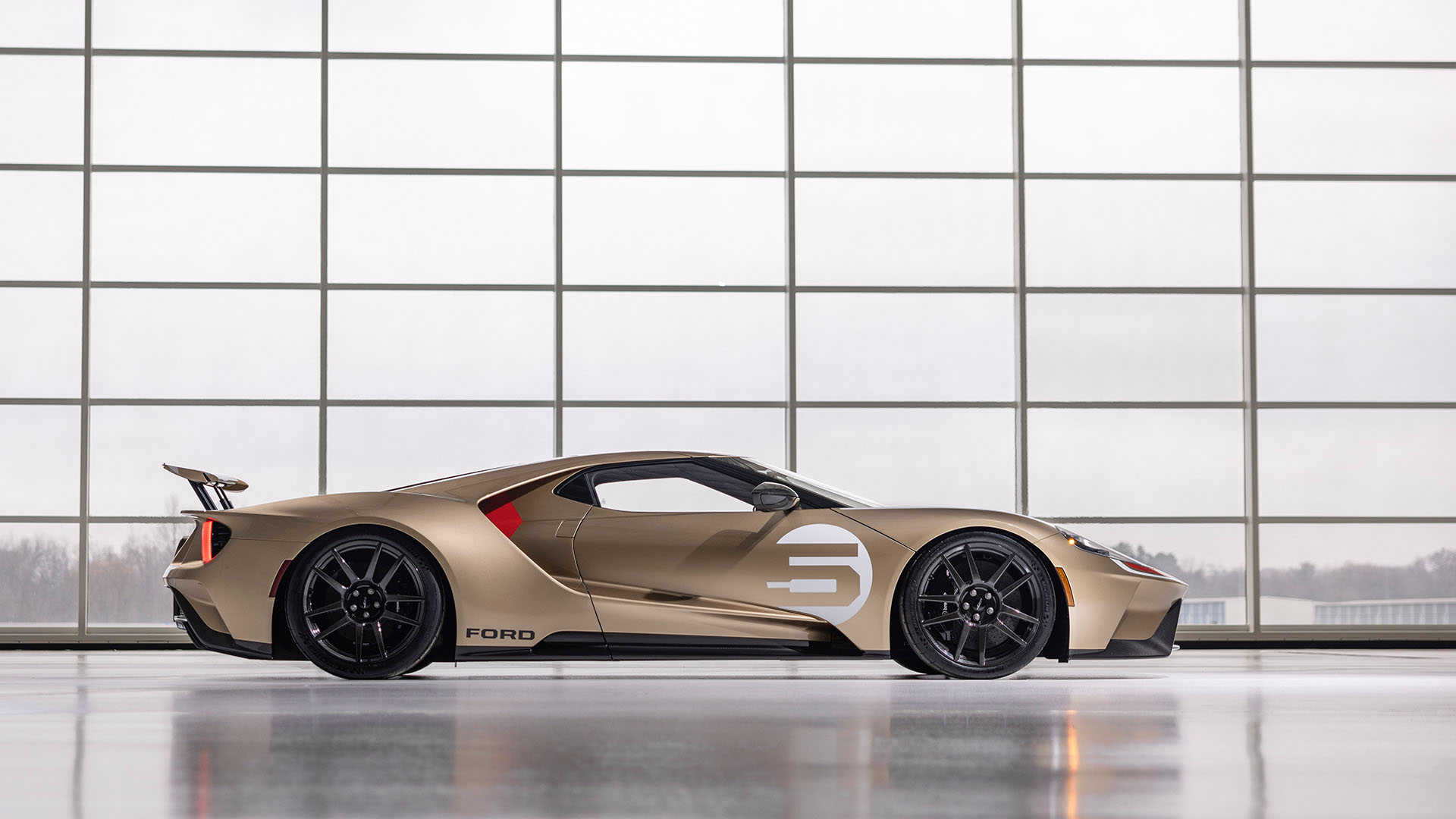 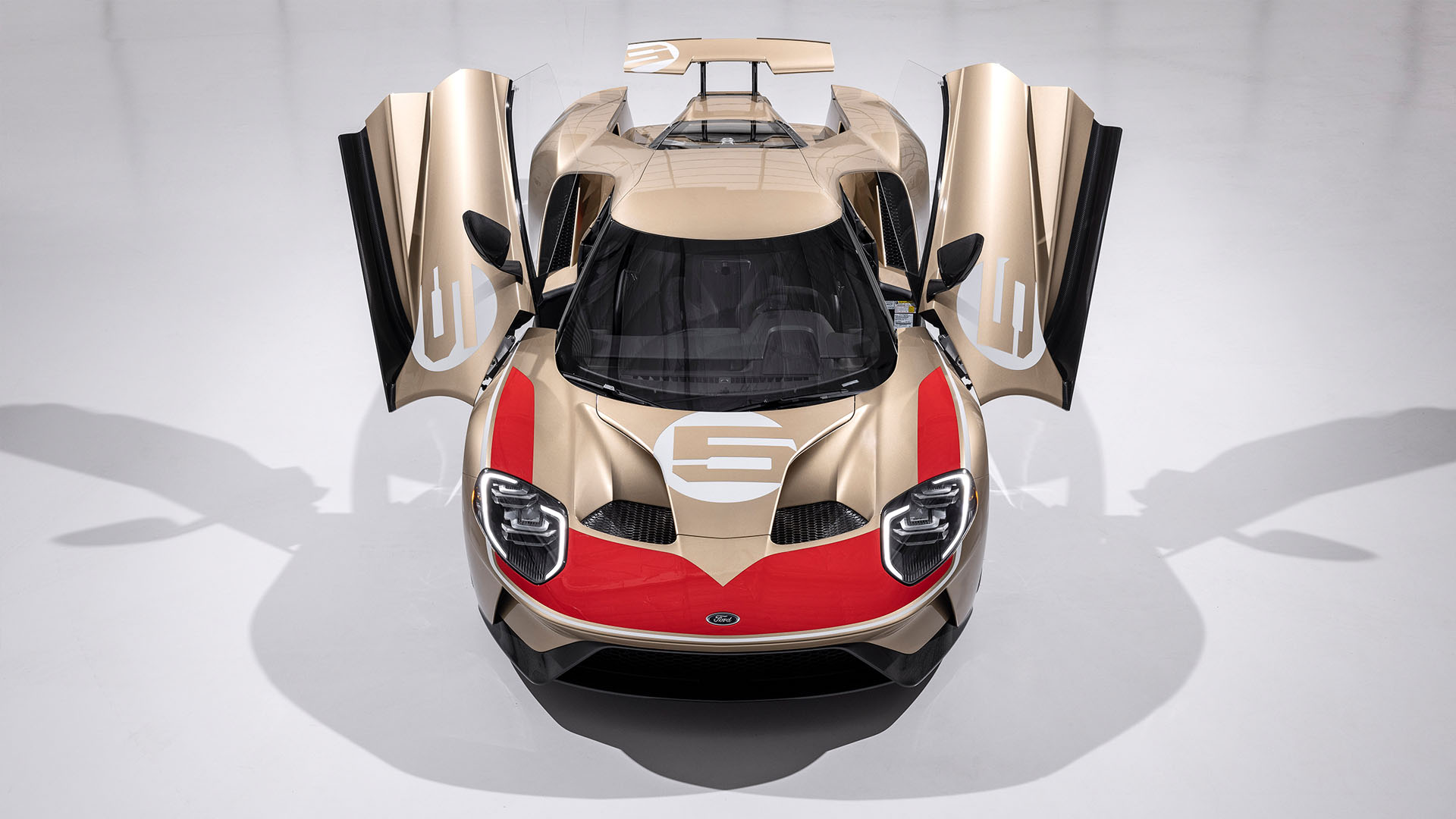 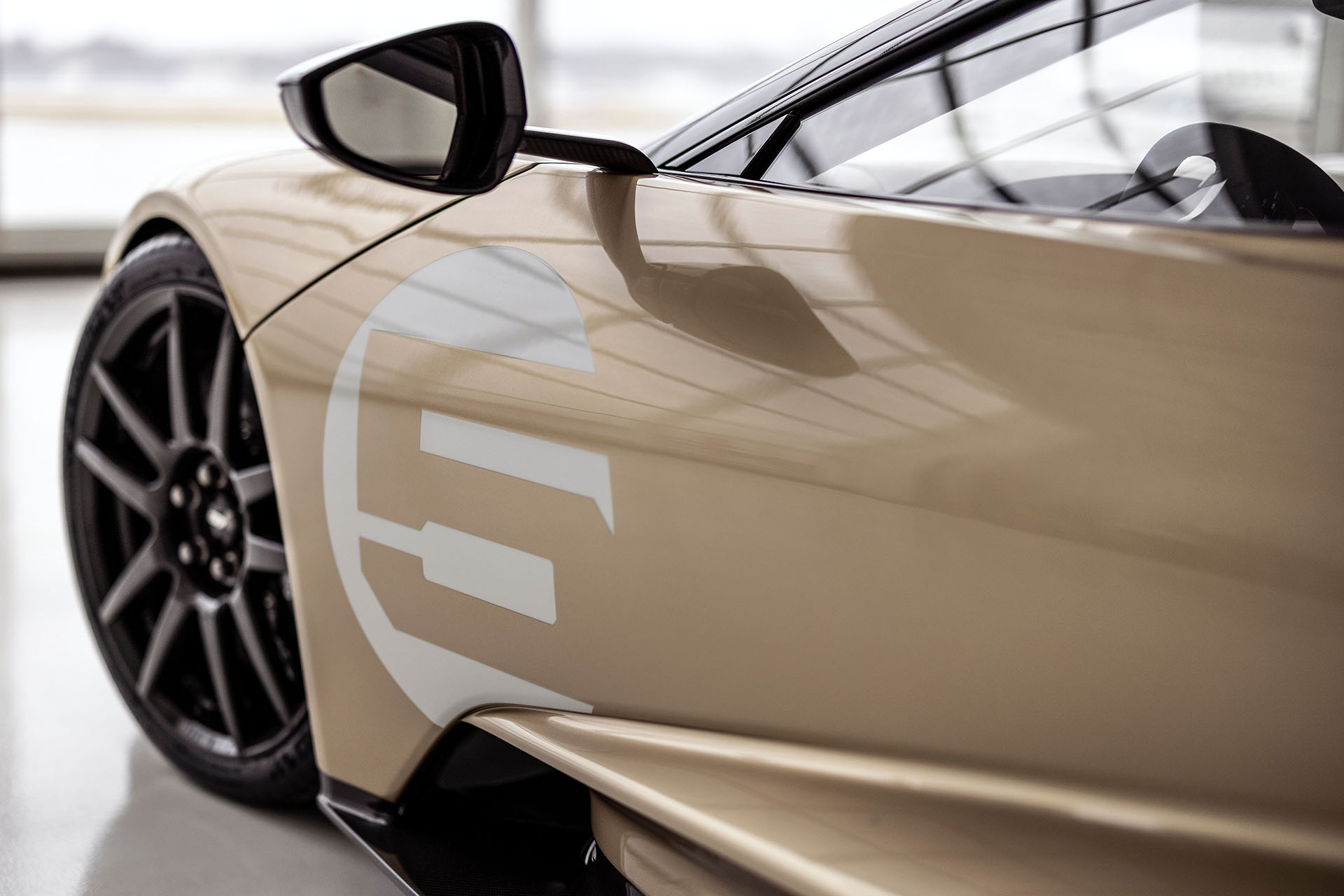 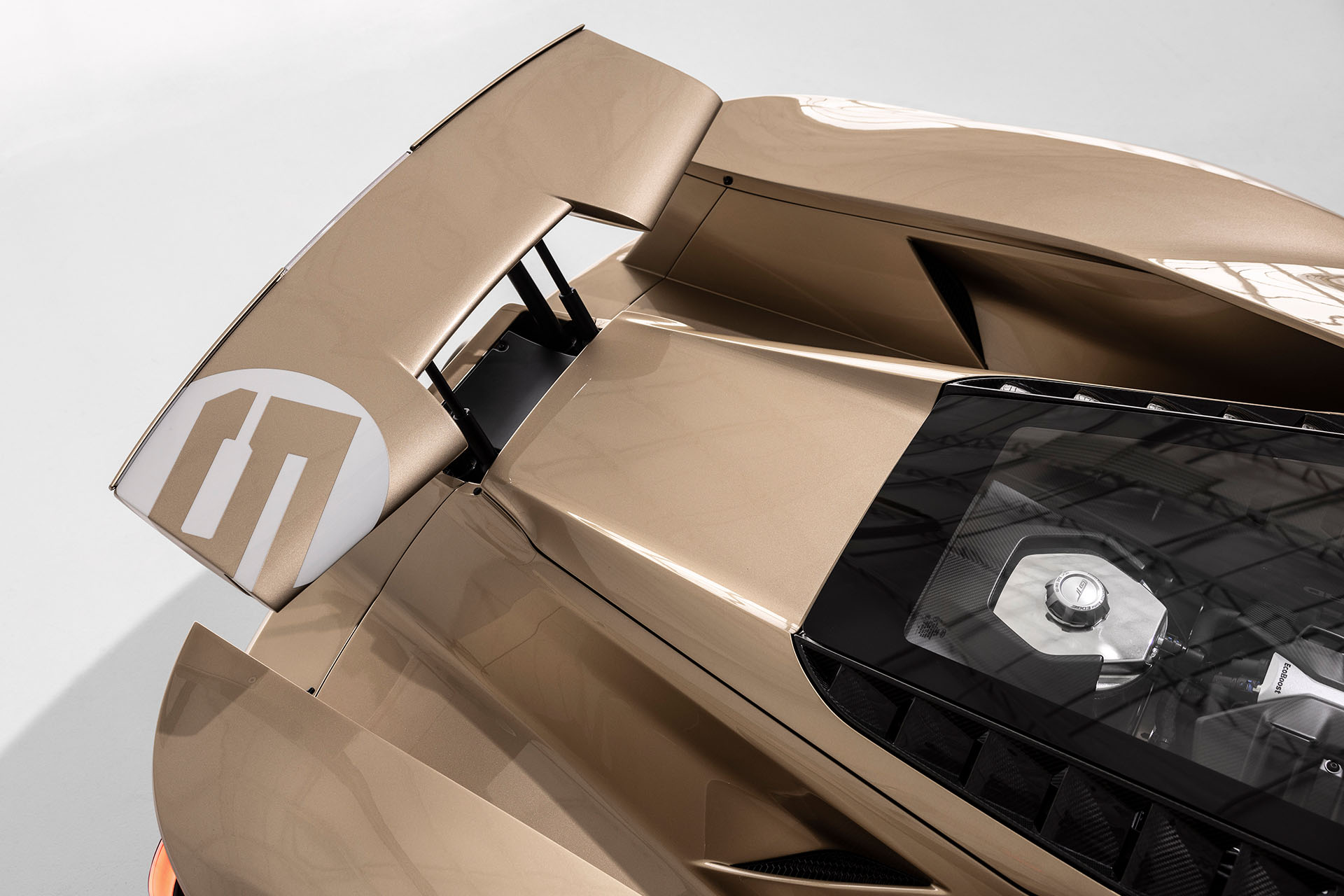