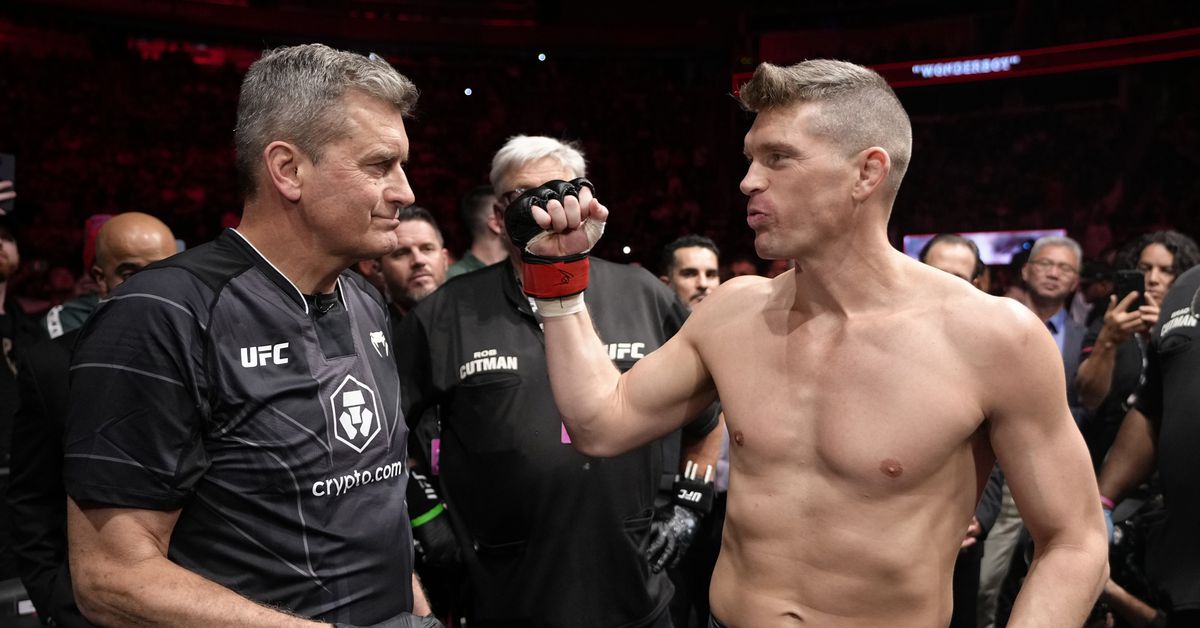 This past Saturday, Thompson turned back the clock, stopping Kevin Holland in the fourth round at UFC Orlando. Thompson entered the bout on a two-fight losing skid with some questioning whether “Wonderboy” was still able to compete at the highest levels of the sport. That’s why, Thompson said, he came out with some extra fire.

“I didn’t feel any pressure at all,” Thompson told Ariel Helwani on The MMA Hour. “I try to keep that kind of mindset out before going into a fight. I don’t like feeling like I have to do anything. Yes, I lost my last two fights, against good wrestlers, but I didn’t take any damage so it’s not like I got beat up beat up. It was more, I went out there to prove to myself and the fans that Stephen ‘Wonderboy’ Thompson’s still here. He’s not too old for this game. Everybody else is telling me that I’m too old. You see it out there because I lost my last two fights. ‘He must be too old.’ So I’m like, are you kidding me? I feel like I’m 25. I’m ready to go.

“I think that’s one of the reasons why I was more aggressive this fight than I ever was before. I think it was the fact that people thought I was too old and I wanted to prove to everybody that I’m still in this game and that you ain’t got the last of Stephen Thompson. I’m still here, baby.”

Thompson has spent the majority of his career in the UFC, amassing a 12-6-1 record in the organization, and twice challenging for the welterweight title, but has struggled recently, including a back-to-back grappling-heavy losses against Gilbert Burns and Belal Muhammad prior to the Holland victory. Those losses, along with Thompson approaching his 40th birthday, had fans questioning how much longer “Wonderboy” can still compete, but Thompson says he still has a lot of fight left in him, so long as the matchups are right.

“The last time somebody told me I was too old, it was after I got knocked out by Anthony Pettis,” Thompson said. “Of course I came back and beat Vicente Luque, Geoff Neal, but it kind of upset me because I don’t feel it. I feel like I’m still in the game. I feel like I can still put on a good show for the fans and the UFC, and this is something I told them. ‘Look, give me a striker, we’ll put on the best fight ever,’ and we always do.

“Anytime I fight against a good striker, we get Fight of the Night. Obviously, there’s a lot of things I’ve got to work on with my wrestling and jiu-jitsu, I’m still getting better with that every day, but it was the right moment. It was the perfect opponent. But the reason this fight was so good was my opponent, a tough [Kevin Holland], able to go four rounds, take the shots that he did and keep on standing, it was awesome.”

Of course, Holland was not the UFC’s first choice for Thompson to face. Originally the UFC wanted “Wonderboy” to fight undefeated prospect Shavkat Rakhmonov, known for both his striking and grappling prowess. Thompson declined because at this stage of his career, Thompson is only interested in fights that will excite his fans.

“When they came to me and asked me to fight Shavkat, I was like, ‘Look, this guy had 10 minutes of control time against… [Neil Magny],” Thompson said. “He had like nine and a half minutes of control and he kept him on the ground, and the UFC is telling me this guy is a striker and he’s going to stand there and strike with me? No way. I’m like, ‘You guys saw my last fights. That’s not what the fans want to see.’ They pretty much booed the last two fights. They were boring, because my opponents all they did was shoot and hold me.

“I don’t know any fan that would want to watch that type of Stephen ‘Wonderboy’ Thompson fight. They want to see a good fight, they want to see the stand up fight, they want to see Stephen ‘Wonderboy’ Thompson do his thing out there, and we did. We got to do that this Saturday. So I did feel a little bit [bothered], which is one of the reasons we took so long to come back. We wanted to find the right opponent and let me tell you, Kevin Holland was a monster. So we made it happen and people are loving it. They love the fight. We got Fight of the Night, people are saying it was Fight of the Year, so I’m excited about it.”

And as for the next “right” opponent, it may have to wait as Thompson broke his left hand during the fight with Holland and does not have a definitive timetable on his return. But “Wonderboy” hopes to fight again in early 2023, and when he does, he’s got a short list of guys he would be interested in facing.

“There’s a few opponents that are being talked about,” Thompson said. “No. 1, Conor McGregor. People are wanting me to fight Conor. There is the ‘BMF’ [Jorge Masvidal], which I’ve been trying to get. ‘BMF’ vs. ‘NMF,’ people are wanting to see that, people want to see the striking class, they want to see us strike. And, of course, Pereira, Michel Pereira. That would be awesome.”