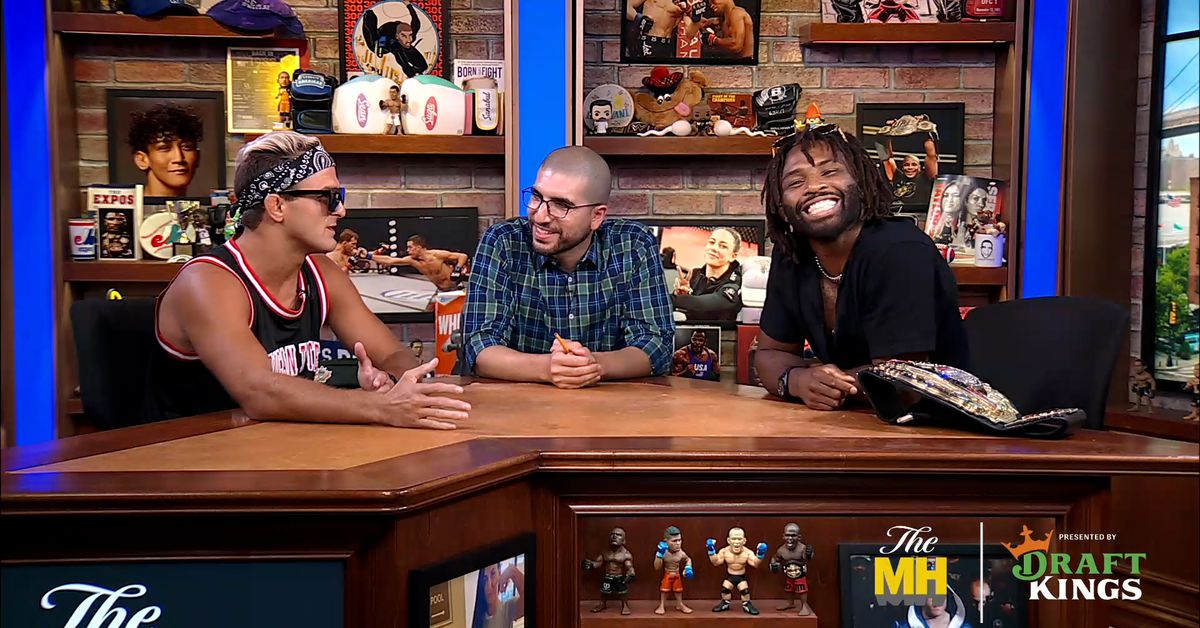 On the Monday of his appearance on The MMA Hour, Danny Sabatello said he went looking for his fellow guest, Raufeon Stots, at the hotel where they were staying in New York City.

According to the brash wrestling specialist, who at Bellator 289 challenges Stots for the interim Bellator bantamweight title, he asked the hotel receptionist for Stots’ room number “just to see the f****** look on his face when he opens the door.”

It was a typical boast from Sabatello, another wrestler who’s walked a well-traveled path to MMA — and a lesser one to pro-wrestling style heel.

Hearing Sabatello, Stots smiled wide as he sat across from his opponent moments after being separated for the first time by host Ariel Helwani.

At the end of the interview, it was hard to know whether Sabatello had gotten under Stots’ skin or the other way around. It was probably some of both. The two got much longer look at each other than the last time they were in the same building, moments after Sabatello beat Leandro Higo to capture a spot in the semifinals. Stots comically hazed his opponent’s smothering wrestle-fest.

This time, the interim champ came ready — prepared anecdotes and all — to match his opponent’s verbal firepower.

Stots repeatedly laid out his case: Sabatello is a pretender, a product of American Top Team’s brain trust for building fighters, and doesn’t deserve to be where he is. Sabatello, of course, disagreed. Between all the cursing and childish insults, the interview was mostly a debate about whether Sabatello belongs at the top.

Early in the interview, Stots said the only Sabatello fight he watched put him to sleep. Later, he said he’d seen every fight and pointed out his opponent’s weaknesses, “because I’m the champ. I do this s*** for real. He doesn’t. He talks a big game. He’s a car salesman.”

Sabatello admitted he hadn’t studied any of Stots’ footage, save for the “lucky” knockout he pulled off against Juan Archuleta in his most recent fight. Sabatello argued that because Stots wasn’t a specialist like Leandro Higo, his previous opponent, “the margin for error isn’t too deep with this guy, because he’s not going to finish me.”

Loud confidence always has been a part of Sabatello’s game. Calculation is where the questions start — and presumably will be answered by Dec. 9.

“I think it is going to be a very exciting fight,” Sabatello said. “I think it’s going to be a lot of exchanges, a lot of crazy hectic chaos until I break him, and he’s f****** tired, and then I go to town on his face, and I spew blood on the crowd. That’s what’s going to be great about this fight. I can open up more.”

Stots argued he is the better wrestler of the duo, citing a pair of Division II national championship wins, and nearly proved it physically before cooler heads prevailed.

For Sabatello, all the interruptions and trash talk were a ploy to get him to fight where Stots believes he can win.

“He’s going to try to bait me into standup fight, which I’m better at, because that’s his only path to victory,” Sabatello said. “It’s deceiving on camera, but I tower over this guy. I might put my palm on the top of your head so you won’t be able to reach me. That’s one of the tactics, we’re working out the game plan. … If it goes to the ground, say goodnight.”

“It doesn’t matter,” Stots replied. “Wherever the fight goes, I’m good. This is why I’m the champion now: Because I’m good every-single-where the fight is.”

On Dec. 9, Stots will get the chance to prove Sabatello is just a gym creation with frosted tips. They’ve now had two chances to face off. On Monday, they bickered over who was truly shook when Sabatello put his middle finger in Stots’ face.

The interim champ ultimately dismisses the upstart’s attempt to butt his way into Bellator’s bantamweight frame.

“I have a four-year-old son,” Stots explained. “When he comes and wants to fight with me, I let him do whatever the f*** he wants to do, because he’s a kid. He poses no threat to me. … Then when I went to slap it away, his hand flew 10 feet out of the way.”

“That was scripted,” Sabatello replied. “You were waiting for that question to be asked.”

“But that was good,” Stots admitted. “That’s a good line from Raufeon. … I come prepared.”