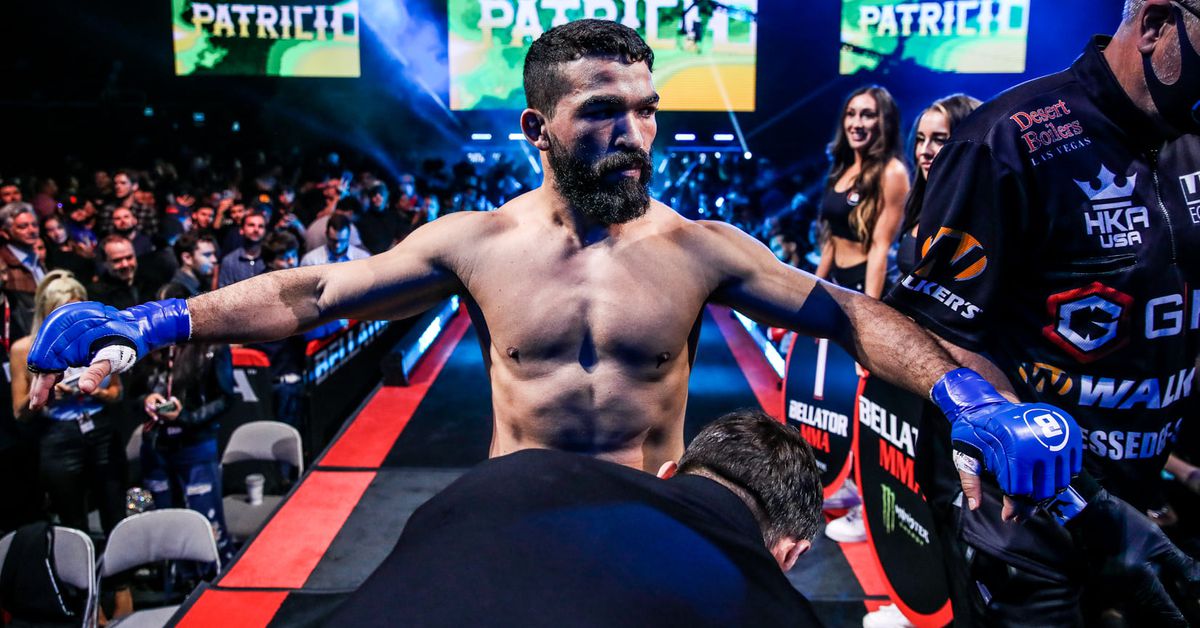 Patricio Pitbull wants double champion status once again in Bellator, but this time he’s aiming for the bantamweight title.

The featherweight king defends his throne against Adam Borics at Saturday night’s Bellator 286 in Long Beach, Calif., and said on this week’s episode of MMA Fighting’s Trocação Franca that he’s two wins away from challenging for the 135-pound championship.

“My intention is to clean the division out one more time,” Pitbull said. “I’m already announcing that my next challenger, if God allows and I defend the title against Adam Borics, will be Aaron Pico. I think he’s doing well in the division. I want to defend the title twice — I won’t vacate it, I’ll keep my title, but I’ll try a shot at the one below. I’ll try to be double champion one more time, this time going down instead of up.”

Pico is on a six-fight winning streak in Bellator with five finishes and is currently slated to face Jeremy Kennedy on Oct. 1. Borics, the last man to beat Pico in 2019, challenges Pitbull after collecting four wins in a row to push his impressive MMA record to 18-1.

Pitbull won the 155-pound gold by knocking out Michael Chandler, but never intended to stay in the division. His sole reason at the time, he said, was to avenge his brother Patricky Pitbull and beat Chandler. With Patricky now the Bellator lightweight titleholder, Patricio want to chase champ-champ status again, but has no plans of making bantamweight home.

“I already told [Bellator] internally and they liked the idea,” Pitbull said. “When I talked to them before, they had the [bantamweight] grand prix going on and I really couldn’t be on it. I’m short but I’m very compact. My legs are very strong, my upper body is thick, the neck … I would need proper work for a fight [at 135] but not a grand prix, where I would have to make weight several times one after the other. But for a title fight, to take the legend step, I think it works.

“I’m not considering the idea of staying at bantamweight,” he continued. “Featherweight is my division, it works really well for me. I don’t suffer at 155 and I stay strong and eat well, but 145 is my division. Knowing that my opponents come from 185 or even 195, that’s where I do better. And bantamweight is out of the question. This is child’s weight, girly weight [laughs], it doesn’t work for me. I tried to stay at this division but it doesn’t work. I only fought there in the beginning of my career.”

That said, Pitbull doesn’t mean he plans on going down to 135 to win the belt and never defend it. If the opponent is right, he’s open to making the cut more than once. The division currently has two champions, with Raufeon Stots claiming the interim title while Sergio Pettis recovers from an injury.

“If there’s someone to defend the title and it makes sense, I’ll defend it,” Pitbull said of his move to bantamweight, “but only if it’s a challenge. Challenges are what move me, really. If there’s something interesting, we’ll go there and get it done. But staying in this division [forever], to me, it’s impossible.”