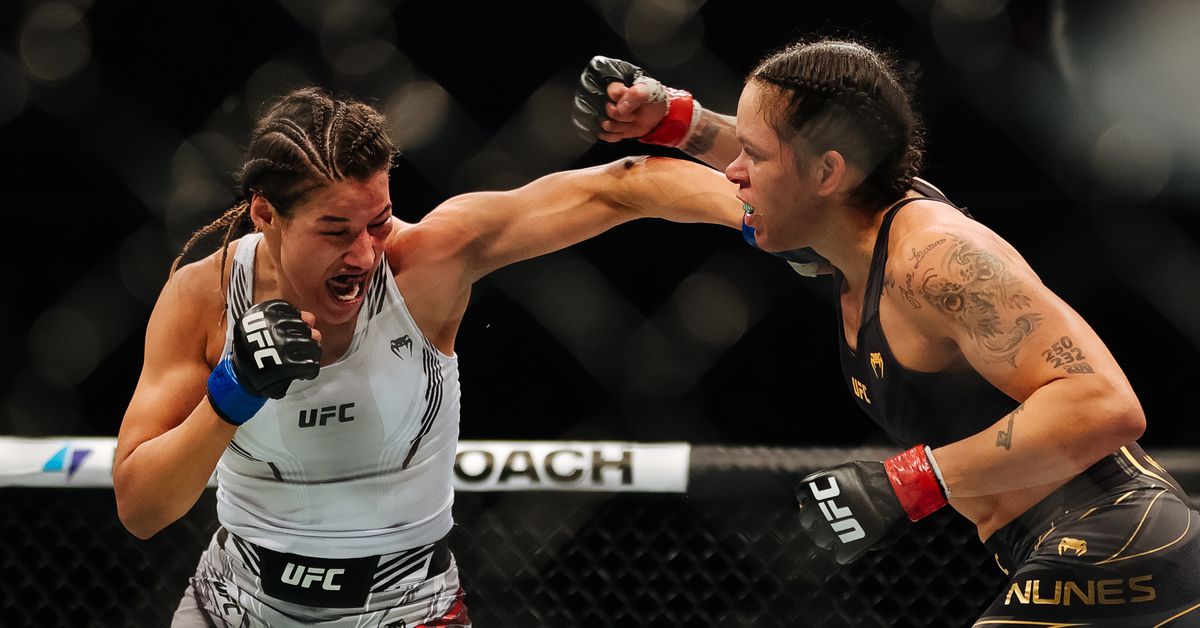 Julianna Peña is coming for war.

This Saturday, Peña defends her 135-pound title against Amanda Nunes in the main event of UFC 277. It’s a rematch of their fight at UFC 269 where Peña drew Nunes into a chaotic brawl before submitting her in the second round to claim the belt. And come Saturday, Peña is ready to do the same thing again.

Following UFC 269, Nunes put her poor performance down to lingering injuries and a terrible fight camp. Coming into the rematch, Nunes has made substantial changes, most notably, leaving her longtime gym American Top Team to start her own gym. It’s a potentially risky maneuver for “The Lioness” but Peña sees it as an improvement for Nunes, one that will make this fight more difficult, but one she’s still prepared to overcome.

“I’m ready to snuff out this torch,” Peña said. “The torch was passed, I snuffed it out. I’m ready to close this chapter, and I’m ready to move forward. With that being said, it’s hard for me to predict what’s in the future and what’s going to happen. I just want to live presently at the moment, and presently I have a bigger, faster, stronger, new gym, better mental-state Amanda that’s going to be facing me on Saturday night, and I don’t take that lightly. I take it very seriously.”

If Peña is able to pull off the upset yet again, it sets up some interesting possibilities for “The Venezuelan Vixen,” the most obvious of which would be a third fight with Nunes, this time for Nunes’ featherweight belt. But in a world where becoming a two-division champion is all the rage, Peña says she’s not interested in bumping to 145 pounds.

“There’s nobody in the division. There’s really not,” Peña said. “It’s a division of who? Amanda? Who else? All the girls that have fought at ‘45 just went up in weight so they could have a shot at the belt, because they couldn’t get done at 135. It’s a division of literally no one. To me, it’s primarily people that either can’t make ‘35 or just want to cut the weight. The real fights are at 135…

UFC 277 takes place this Saturday at the America Airlines Center in Dallas.

Stars. Sean O’Malley on facing Petr Yan at UFC 280: ‘This is how superstars are created’.

Opponent. T.J. Dillashaw: Aljamain Sterling is ‘not a dangerous fighter’.

Love. Amanda Nunes OK with not being loved in Brazil: ‘Maybe they don’t like me’.

A very respectful fight build up.

No Bets Barred. Breaking down the best bets for UFC 277.

If the UFC goes to Philly, Felder is coming back. Bet.

Last night was the first time in a while that I truly missed fighting. Seeing all the amazing philly fighters crush it got me wanting to at least get back in the room. @ufc gotta get all these monsters on the same card! @seanshelby @danawhite #ironlung #philly

Hey @KaylaH we betting on the main event again this week

Thanks for reading! See y’all tomorrow.

Who wins this weekend?