Just in case the Lamborghini Huracán STO is a little over the top for your taste with her massive rear wing, roof-mounted air intake, and that famous Cofango, the entire front section, including the fenders actually tilts forward to open, but just don’t expect any luggage space underneath that massive hood, there is very little room, it’s all about airflow, radiators, and downforce, keep in mind the Huracán STO is literally the Super Trofeo Omologato, the homologated street-legal version of the Super Trofeo race car, there is another option from the Italian dream car builder in Sant’Agata … the Tecnica. 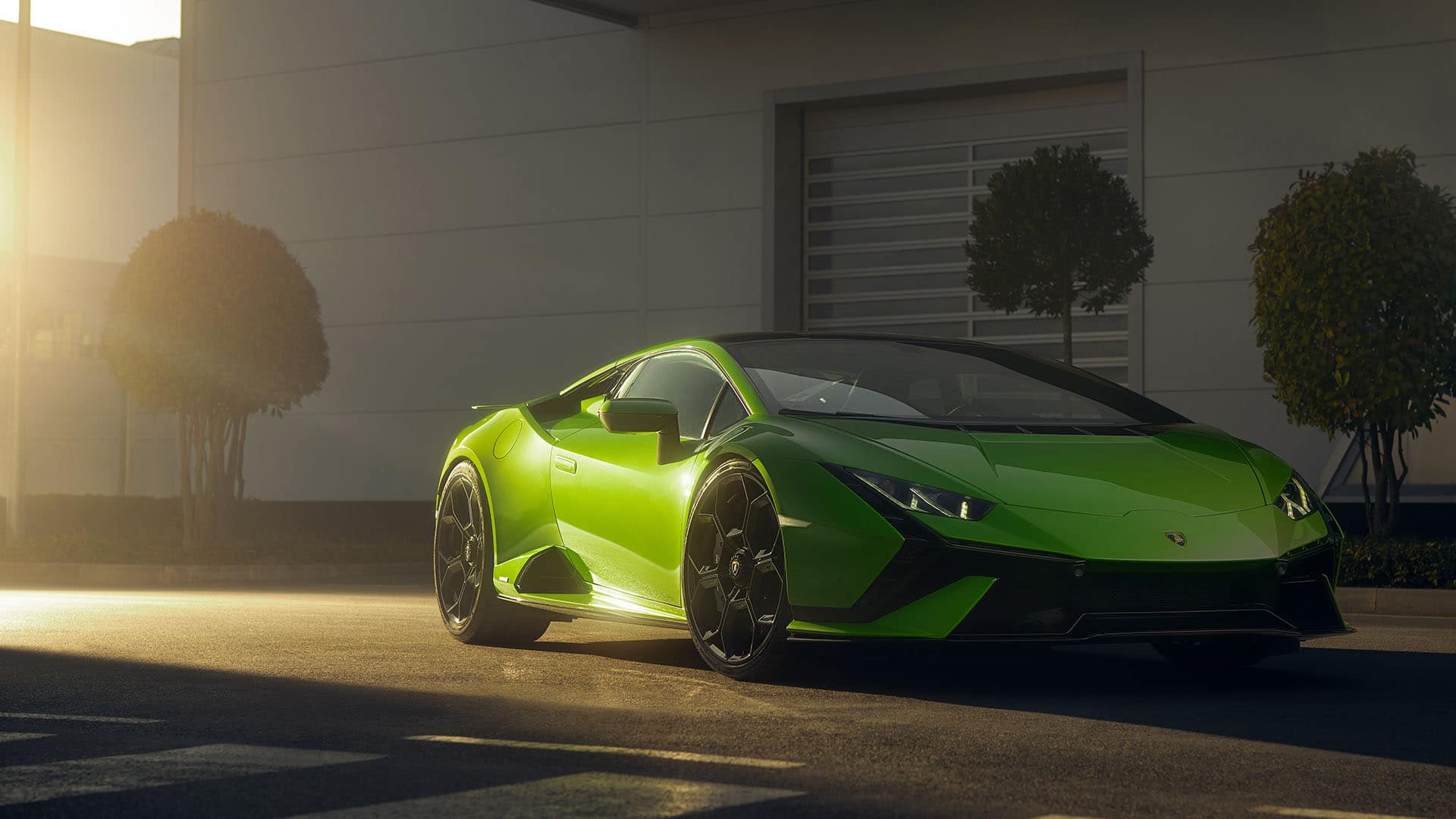 I know there is already a Huracán EVO, a Huracán EVO RWD, and now the Huracán Tecnica slots between both EVO models and the top of the line STO, and let’s not forget both the EVO and the EVO RWD come in both Coupe and Spyder version, so at this time Lamborghini has a total of six different V10 models available, and rumor has it there is another one on the way, which might be the Huracán Sterrato, a kind of raised-suspension, off-road version of the low-riding supercar, and personally I really hope there will also be a Huracán Tecnica Spyder in the near future, but there is no official information on that one, yet.

So why would Lamborghini add yet another version of their most successful V10 model ever? At first, we were under the impression the Huracán STO was a successor to the impressive Huracán Performante, but that doesn’t seem to be the case, it seems this new Tecnica is more of a Performante evolution with the STO being a step up from that, and this is also shown in the power output, the Tecnica comes with 640 hp, just like the Performante, but something is different with this new car, it’s a rear-wheel-drive only, the new Huracán Tecnica is all about driving fun, so only the rear wheels are powered, hence the small LP640-2 sign on the side sill of this new V10 model.

Some might even compare the new Huracán Tecnica and the Huracán STO with the Porsche GT3, with the Tecnica being the ‘Touring‘ edition while the STO is the big-wing version, and I’m fine with that, bottom line is that the ‘facelift’ for the new Huracán Tecnica is probably the most extensive one apart from the STO, the front is heavily modified and actually reminds me of the Sián front with those black Y-shaped intakes, and that inspiration seems to have been taken to the rear of the car with the hexagon exhaust pipes inside a brand new design rear diffuser. 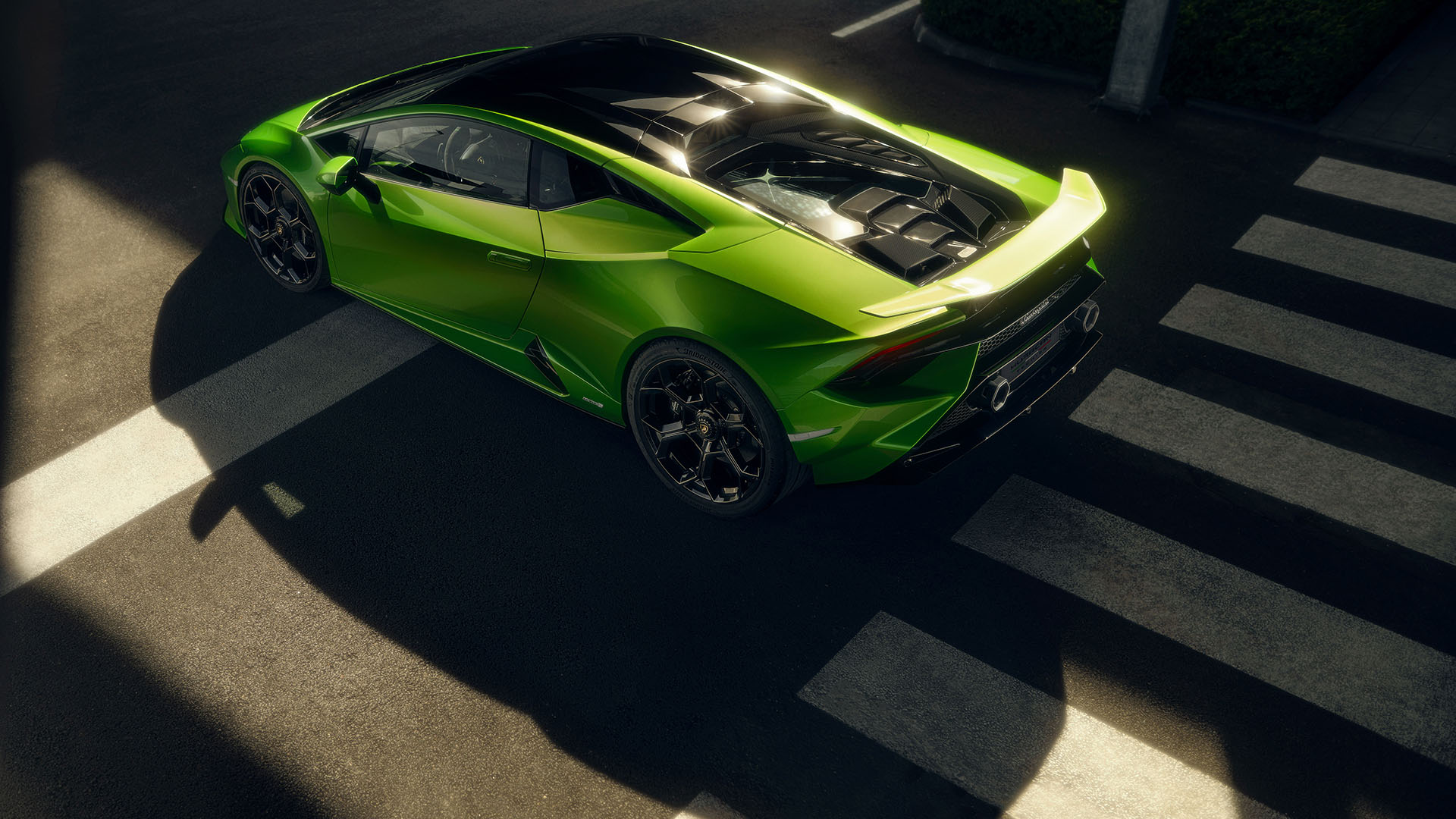 “The Huracán Tecnica condenses Lamborghini’s design and engineering expertise to create the perfect fun-to-drive Huracán, as compelling when driving to the race circuit as it is on the street itself,” says Automobili Lamborghini Chairman and CEO Stephan Winkelmann. “The Tecnica ensures that the pilot enjoys the strongest connection to the car and asphalt, with the car’s potential always at his fingertips for ease of use in every driving mode and environment: in an era of virtual experiences it pays homage to technical purity and physical sensation. The Tecnica completes the Huracán line-up, sitting perfectly between the RWD and the track-focused STO, flawlessly presenting technology, performance and the Huracán’s V10 aspirated engine in a dramatically evolved design.” 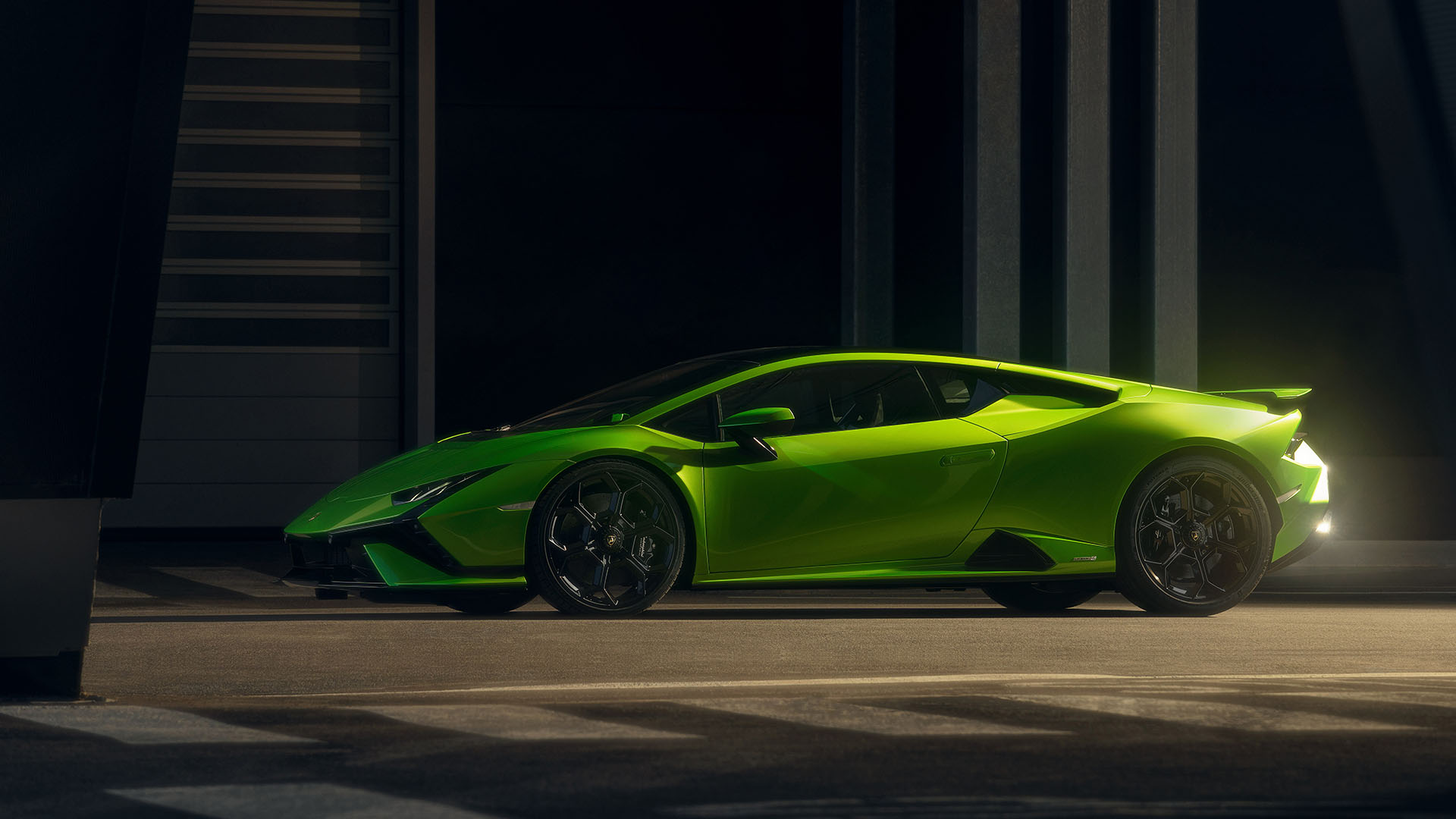 If we compare the Huracán Tecnica’s side view with the Huracán EVO, you’ll notice the new evolution is 6.1 cm longer, and the overall impression is that the Tecnica is lower and broader too, but she’s the exact same height, and we look closer at the side view we also note the section behind the side windows is totally different, it seems the inspiration for the higher-up side intakes came from the absolutely mind-blowing, track-only, Essenze SCV12, and the redesign continued on the engine cover, slightly looking like the Performante cover, but totally different, which also required a different rear window, how small the latter might be, it’s still a window. 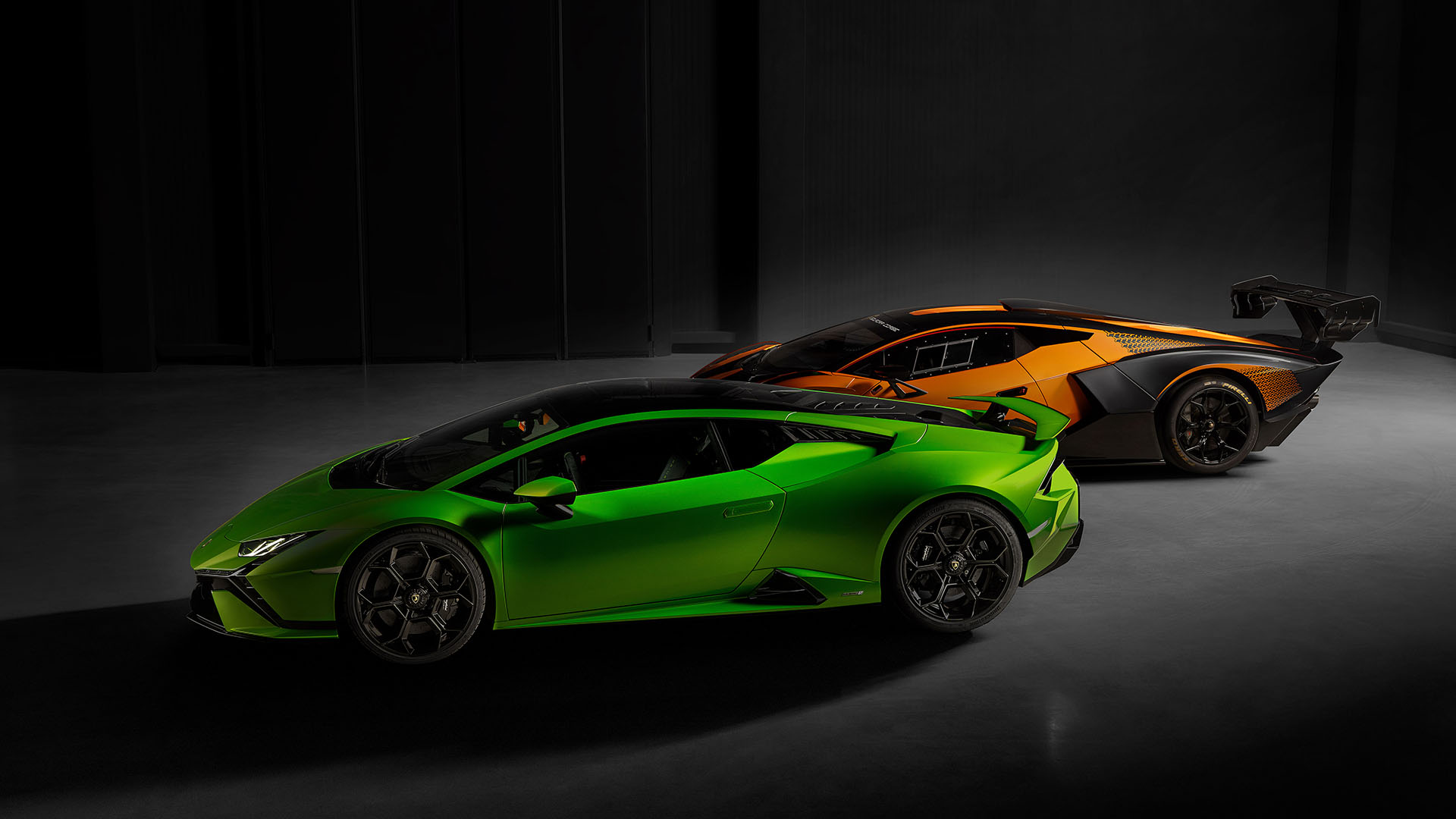 Another really interesting Lamborghini was looked at when it came to the wheels, I’m sure you’ll agree that these new Damiso wheels in a massive 20-inch tall size look a lot like the ones we’ve seen on the Vision V12 Gran Turismo concept, also note these are center-lock wheels and are shod with Bridgestone Potenza Sport tires, just like the Huracán STO. I do think some owners would have preferred a larger rear wing, but the Tecnica comes with a rather small, not too high rising, rear aerofoil which still adds 35% downforce compared to the Huracán EVO RWD. 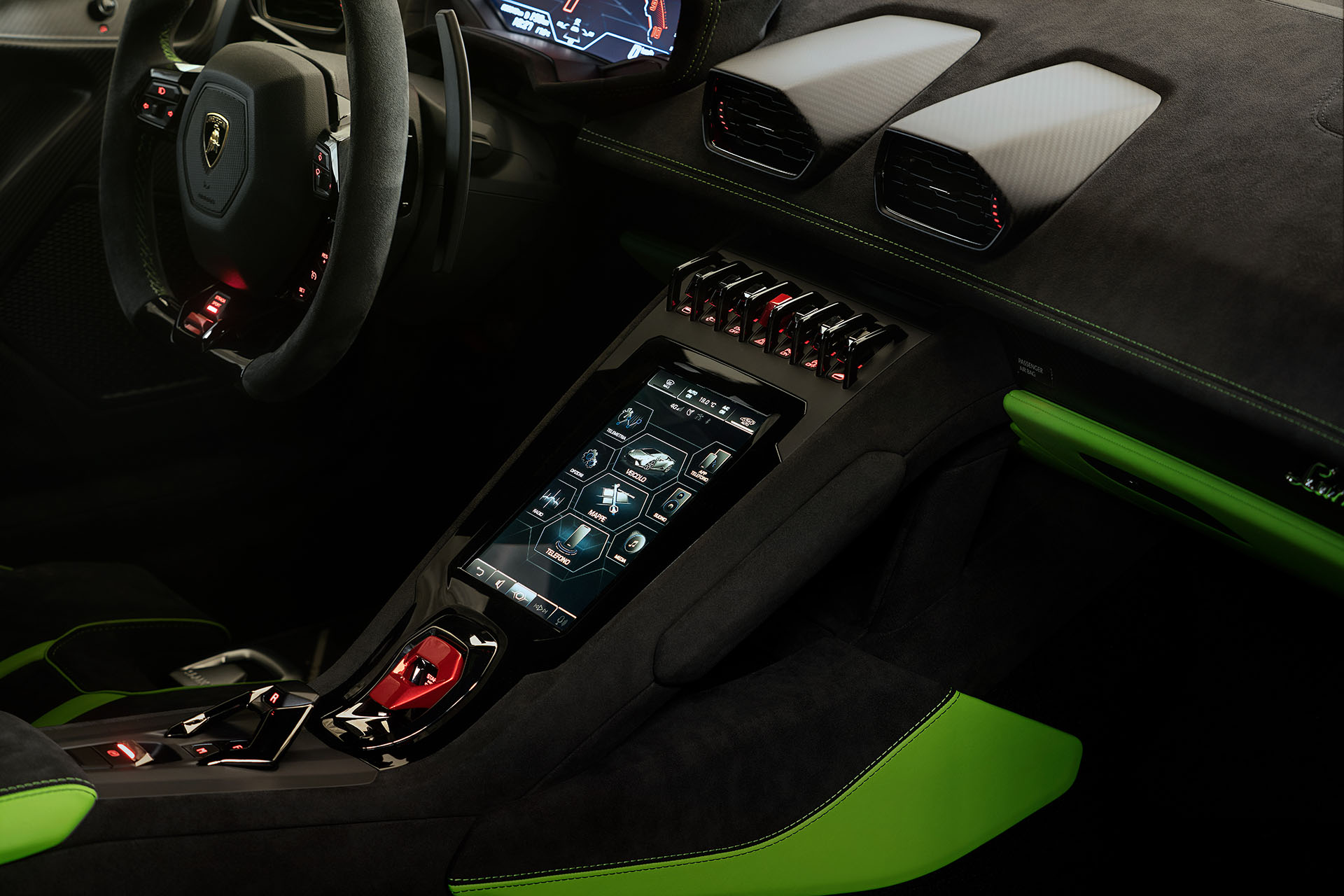 This new Lamborghini Huracán Tecnica isn’t just an exterior redesign, in fact, Lamborghini also created a new HMI interface just for this model, with reduced colors to emphasize on readability, with the large display on the central console showing only ‘fun-to-drive elements’, including the LDVI functions in real-time, even the dashboard cluster in front of the pilot, we can hardly call it a driver in control of this impressive Tecnica now can we? Similar to the range-topping Huracán STO, the HMI includes connected telemetry and on-board diaries of destinations and track times, connected to the UNICA app. 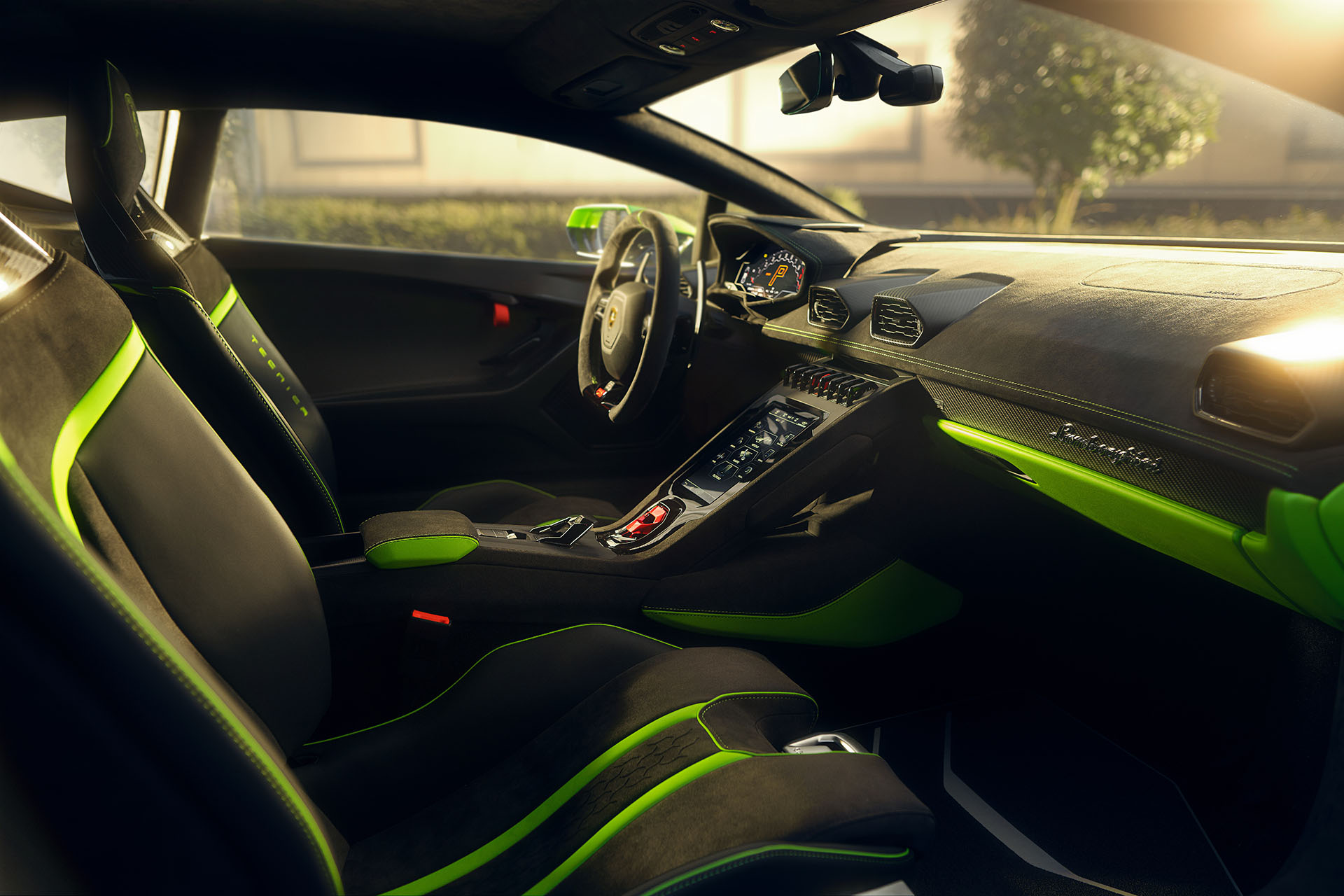 Naturally, those stunning sports seats inside this Huracán Tecnica come with their bespoke options, some on the standard options list, some only available through Lamborghini’s in-house personalization department called Ad Personam, that includes custom stitching patterns and laser-cut Alcantara just for the Tecnica, and while this V10 comes with a list of eight standard colors for the bodywork, you can call on Ad Personam to make your choice from a palette of no less than 200 different hues, and if that’s not enough, you can even create your own bespoke color, and name it.

What does sound strange is the fact Automobili Lamborghini SpA made a global introduction of this model online, it is even available on the configurator on their website, but the press release does state she isn’t offered for sale yet and the fuel consumption and emissions data is in the type approval stage … did they rush this unveil? I don’t think so, as it became evident some members of the press were already able to drive a black-wrapped prototype of the Huracán Tecnica in late 2021, under embargo until now naturally.