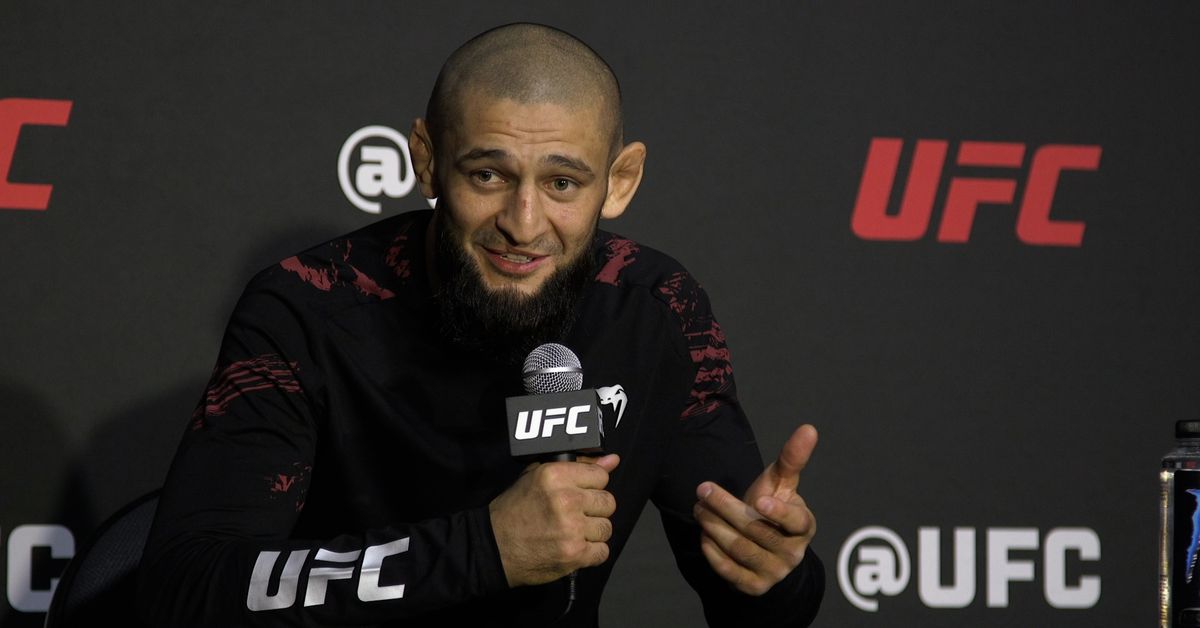 Khamzat Chimaev is disappointed he didn’t fight Nate Diaz at UFC 279. On the other hand, maybe it was for the best.

“If I fought him, I would kill him,” Chimaev said at the press conference following Saturday’s pay-per-view event. “I would be in a jail, so maybe I have to be happy.”

Chimaev definitely was happy after tearing through Kevin Holland in the co-main event. The audience at T-Mobile was considerably less enthused, loudly booing the Chechen fighter for his big weight miss and lack of remorse that forced the shuffling of UFC 279’s headliners.

Diaz made the best out of the situation, meanwhile, submitting last-second replacement Tony Ferguson in the co-main event. The cheers he got were in stark contrast to the reaction Chimaev got in victory.

“You care about that s***? I don’t care,” he said. “I care about my family, I care about my career, I care about my money, so what now? One day, they’re with me, one day they’re not with me. I’m a real guy, so I like the people that are real, not fake people, going one way, then the other way.”

The crowd barely had a chance to react before the co-headliner was over. It took Chimaev less than three minutes to turn Holland from a trash-talking rival to a submitted victim. It was his fourth UFC win where he didn’t take a single punch from his opponent. It also nearly didn’t happen. That was his greatest concern when he said a UFC-appointed doctor stopped his weight cut, ensuring he would miss weight for a welterweight contest with Diaz and jeopardizing the fight.

Instead, the UFC booked him opposite Holland, and Diaz was given Ferguson. Most MMA observers believed it an improvement on the card’s previous iteration.

“I was thinking without a fight, I have to go fly back,” Chimaev said. “I want to fight. I got to Vegas, so I want to fight Diaz. I don’t care about my money. Give all my money to that guy, just let him fight with me. If he’s talking about, ‘I’m the gangster, or all that s***,’ you don’t care about the weight.

“And they want to jump on me when I was one-on-one there backstage and there were 10 guys. I didn’t give up. So I want to fight them if they come forward. I don’t care about that, the weights and this s***.”

A few water bottles thrown back and forth (allegedly) between Chimaev and the Diaz camp backstage at the UFC 279 press conference was as close as they got to a fight. From what Chimaev saw backstage on fight night, he was not impressed by Diaz’s work in the octagon.

“Did you see that fight? How they kick, how they punch, how they wrestle, how they grapple, do you see? The guys are old,” I’m a young guy. I’m the killer. I don’t understand what the people are talking about. This guy is from USA, this is his home. Guys like him. OK, make that f****** fight in my country. You will see. You will never find some guy who likes Diaz there. Nobody going to say Diaz’s name there. If they say it, they will kill them, so what now?”

Chimaev may never understand why Diaz remains one of the sport’s biggest heroes. From where he sits, it’s the results in the cage that matter the most. That’s not his concern, however. He and his coaches are aiming for titles in three divisions. Diaz escaped a war with him. The battles are now against new targets.