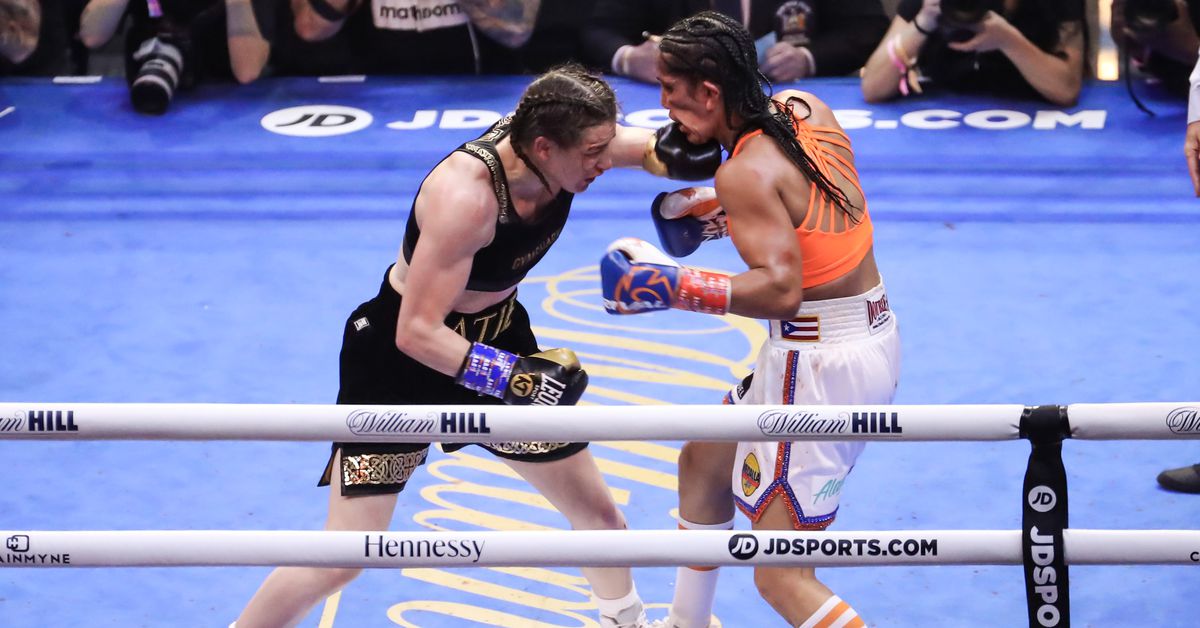 Katie Taylor is targeting early 2023 for her first ever fight at Croke Park in Ireland, and she would love to have the biggest fight possible for her homecoming.

The undefeated boxing champion knows any opponent would draw a crowd at the massive soccer stadium. But ideally, a rematch against Amanda Serrano is the fight she wants most.

Taylor earned a hard-fought split decision win over Serrano back in April in a matchup that headlined a card at Madison Square Garden in New York.

“I don’t know the ins and outs of what’s going on there but they definitely need to sort their problems out for this fight to happen,” Taylor said on The MMA Hour. “Whatever’s going on, they obviously need to sit down together and speak and talk about it.

“It would be a shame if the rematch didn’t happen because of that. They just need to be bigger men and do what’s right for boxing. If that is what’s in the way of making the rematch happen, they definitely need to obviously sort that out.”

The biggest potential hurdle to that fight actually happening might come down to the promoters as Taylor is represented by Eddie Hearn and Matchroom Boxing while Serrano’s fights are handled by Jake Paul and his Most Valuable Promotions. While the two sides worked together previously, Hearn is currently embroiled in a $100 million defamation lawsuit against Paul after he accused the British promoter of fixing fights.

As it stands, neither Hearn nor Paul have said that the lawsuit would prevent them from co-promoting an event together, although the optics might be tough considering the contentious relationship they now share.

For her part, Taylor knows there’s no bigger matchup for her career than facing Serrano in a rematch and the stakes would be even higher if they were able to clash in a stadium show in Ireland.

“I do believe it is the biggest fight out there,” Taylor said. “There is such a huge appetite for that fight. The first fight was huge but I could only imagine what the rematch would be like. It would be even bigger than the last one.

“I do believe that’s the only thing would top Madison Square Garden would be headlining a huge show over here in Ireland. 80,000 people. It’s exactly what myself and Amanda deserve. But obviously if that fight doesn’t happen, like I said, there are still big fights out there.”

Taylor is confident that Serrano would happily accept a rematch against her, even if the fight happened in Ireland. So the details for the potential fight might really come down to Hearn and Paul working together to find a common ground.

“She said after the fight she did want it,” Taylor said about Serrano. “The ball’s obviously in their court if you want it but if you don’t want it, we obviously have to move on and look at different options.”

As disappointing as it might be to miss out on the Serrano rematch, Taylor knows that there are other options available for her next fight.

According to Taylor, the location for the fight is most important to her. She’s long dreamed about headlining a card in Croke Park, and that fantasy appears to be much closer to reality.

“I don’t think the opponent matters either,” Taylor said. “It would be great if it was the rematch but there’s definitely no shortage of big fights out there. Any fighter from 130 pounds to 140 pounds, I’d be happy to step in the ring against. Any one of those fights will sell out, I think.