The “Ferrari Forever” event opens at the official Enzo Ferrari Museum in Modena, an exhibition to celebrate the 75 years of the World of Classiche, a milestone for the Maranello-based company, as Enzo Ferrari started up the Ferrari 125 S, his very first car under his own name, back in 1947, on March 12 to be exact, so inaugurating Ferrari Forever on this exact date 75 years later is a perfect homage to this great brand, and that 1947 Ferrari 125S just wasn’t another new car on the market, it would become a declaration of intent that started 75 years of the special culture of excellence built on craftsmanship, dedication, tradition, and innovation. 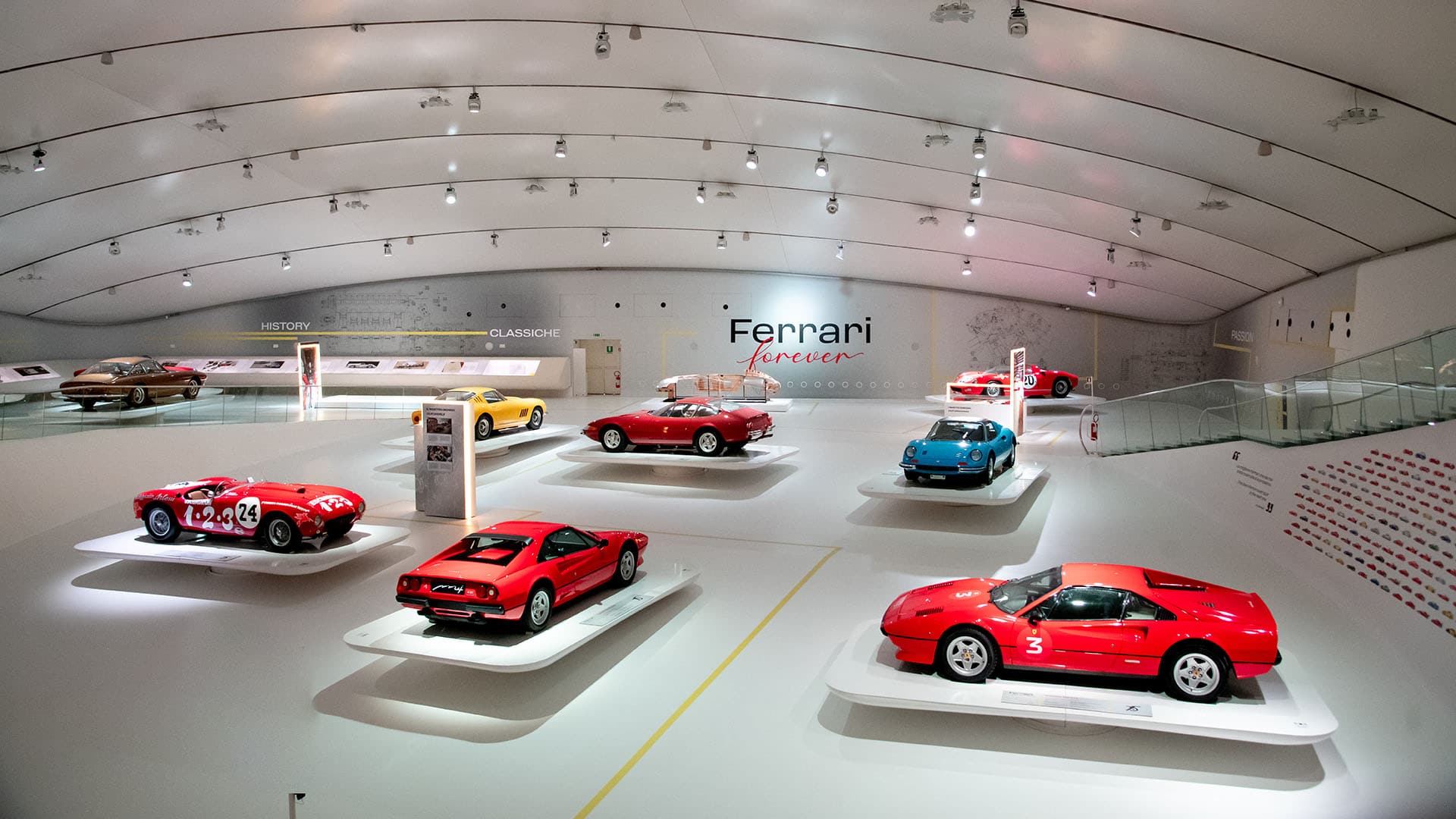 75 years ago to this day, Ferrari celebrates their anniversary by opening the doors to Ferrari Classiche at the Enzo Ferrari Museum in Modena, started back in 2006, the unique department of Ferrari Classiche offers owners of these priceless heritage Ferrari cars an exclusive service to protect their art on wheels from Modena, and the amazing work carried out by this department is now presented at “Ferrari Forever”, for instance, if you own a 20-year old or older Ferrari road car, sports car, or prototype, you can apply for a Certification of Authenticity from the Ferreri Classiche department, and if your car meets the requirements you’ll receive an official document stating the full authenticity of that car. 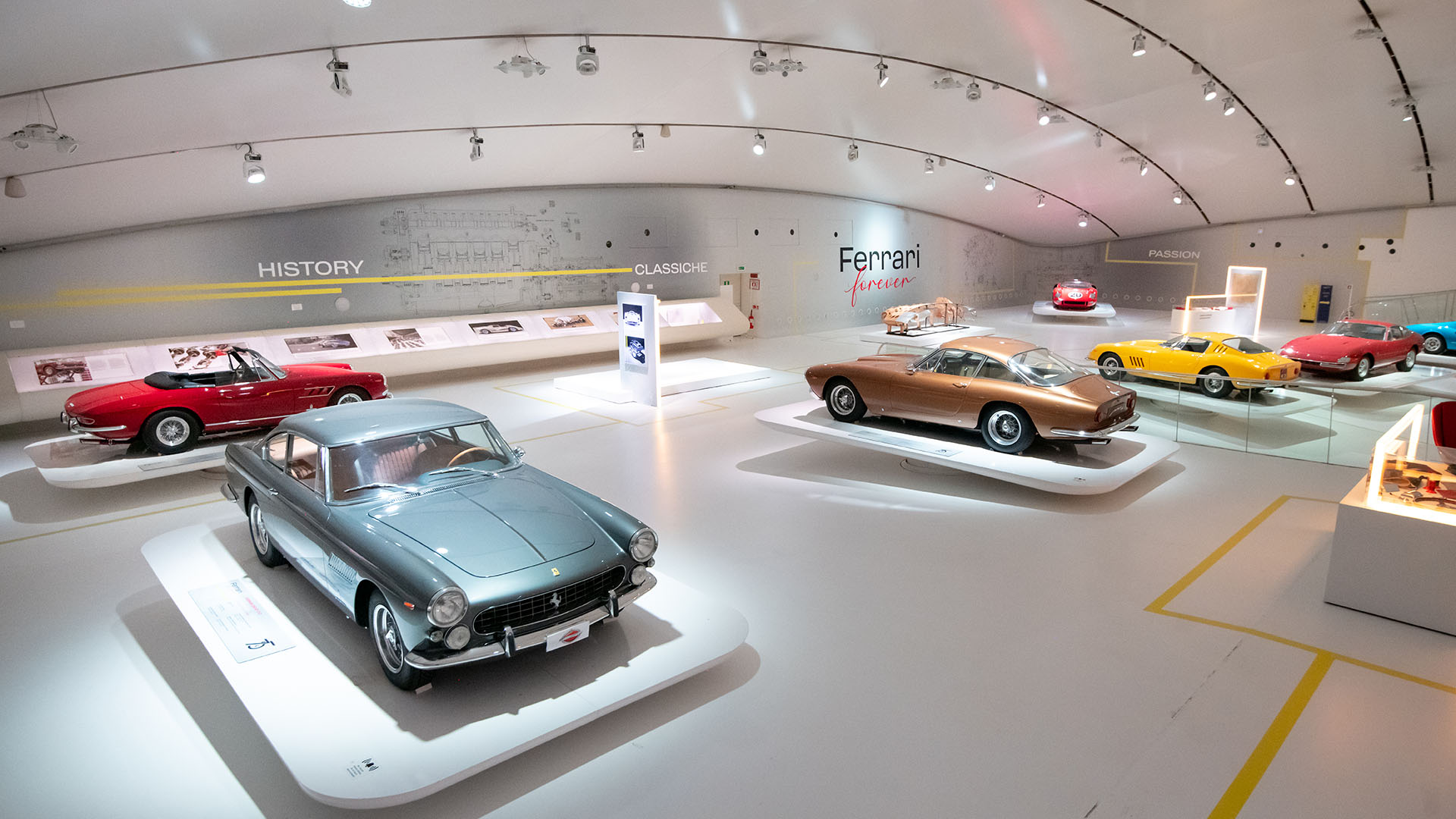 Ferrari Forever will take you through the fascinating maintenance and restoration carried out in Ferrari Classiche’s workshop, processes that bring cars of all ages back to their original splendor. This work relies on access to the foundry and machine tools that produced the original parts. None of this would be possible without the expertise of highly specialized technicians, who have in-depth knowledge of the secrets of Ferrari engines and the unique features of each
model. 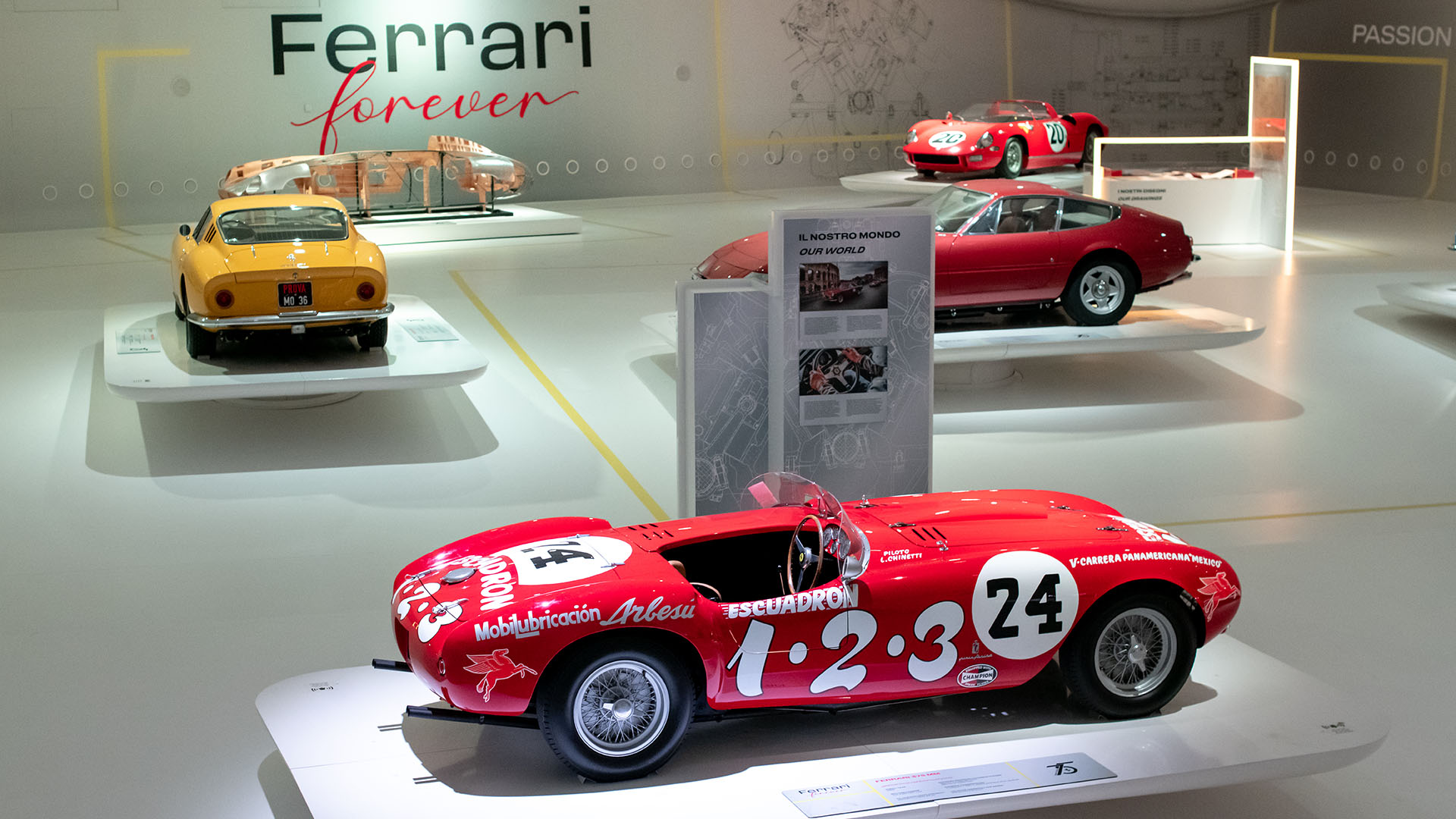 There is a particular focus on the Historical Archive, a perfectly preserved collection of the assembly sheets of every Ferrari produced since 1947. Access to the Archive ensures that all Ferrari Classiche’s work conforms exactly to the
original designs. The story of Ferrari Classiche’s work is complemented by 15 officially certified cars on display, including some restored by the Department itself. The essence of Ferrari’s history can be found in these vehicles, which embody the marque’s sporting soul. There are unique Gran Turismo models like the 1956 250 GT Competizione Tour de France, by designer and coachbuilder Sergio Scaglietti. The bodywork of some of Ferrari’s most alluring and victorious sports cars was shaped by master craftsmen at the Carrozzeria Scaglietti atelier. The 250 GT’s trophy cabinet is one of the most extensive in sports car history, having won a record number of victories in its GT Class. 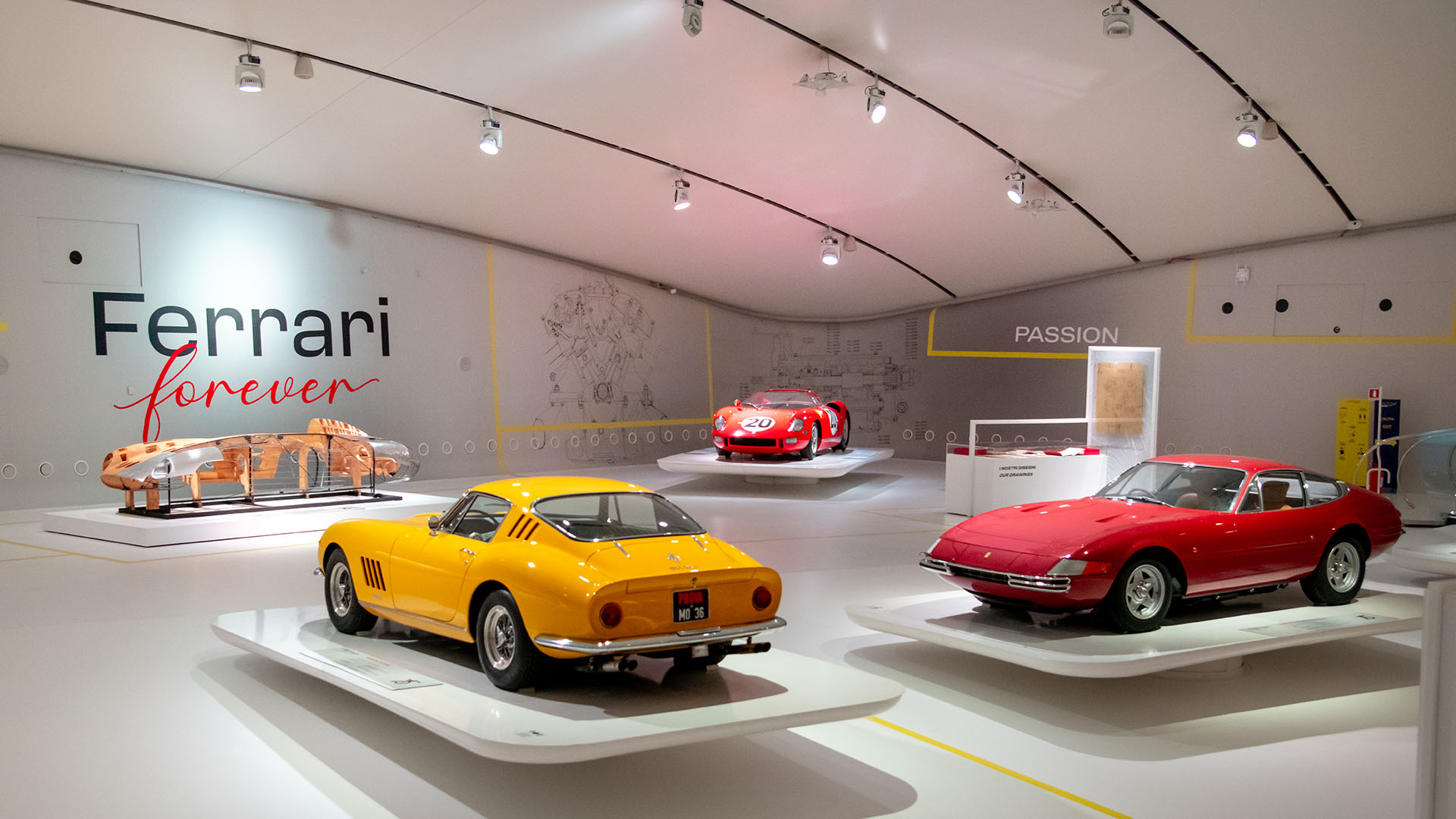 Another example of rare beauty in the exhibition is the 1959 250 GT Cabriolet, built in limited numbers by Pinin Farina. Aimed at sophisticated clients who loved to frequent glamorous destinations on the Côte d’Azur and California, this elegant, open-topped Ferrari Gran Turismo offered balanced lines and a comfortable drive. It was seen at the world’s most exclusive events and played a starring role on the big screen in Hollywood films, and in the daily lives of leading actors and international jet-setters like Barbara Hutton. 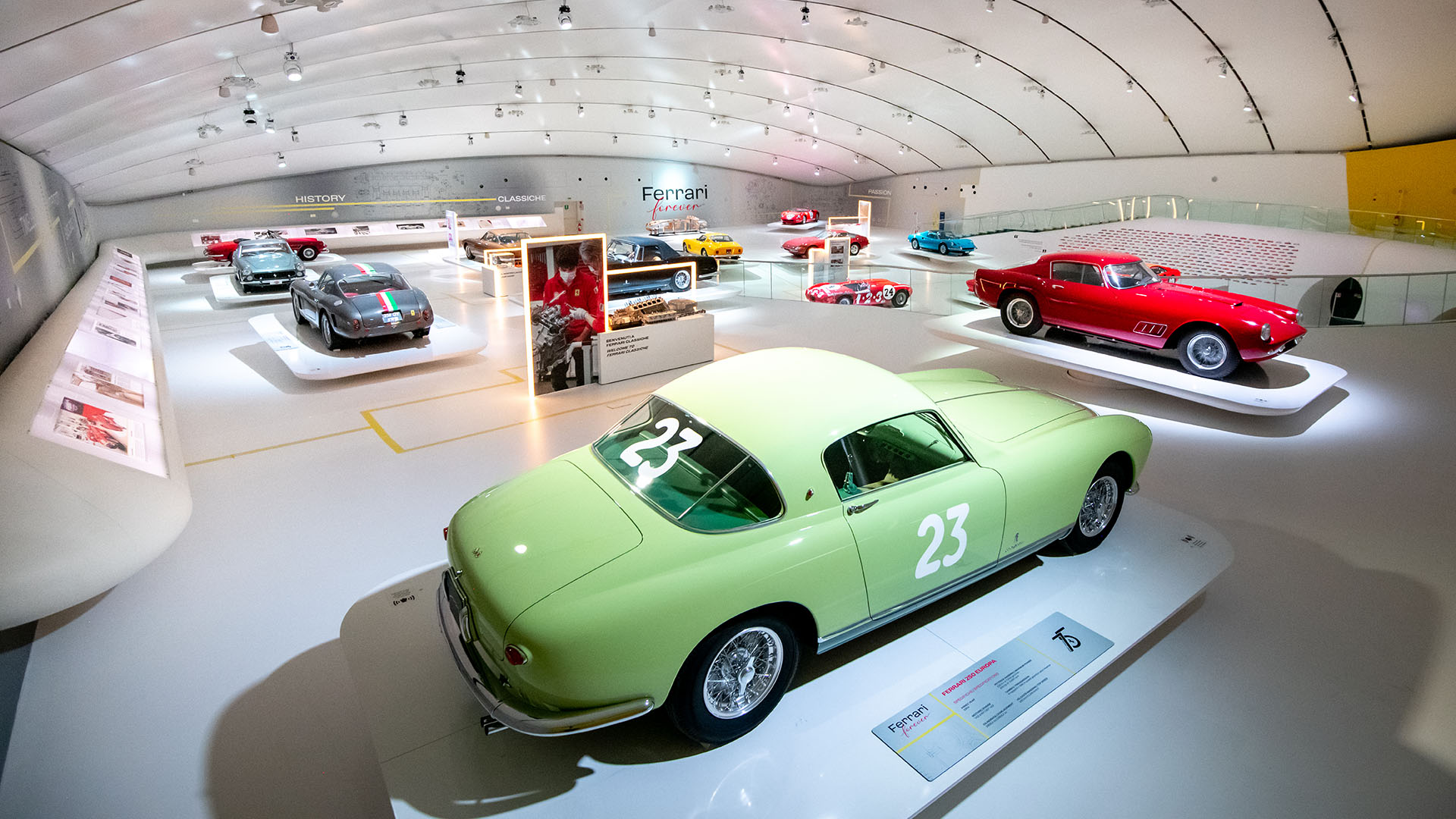 In addition to the classic cars on display, visitors will also have the opportunity to admire unique artifacts such as an original “mascherone” from the 1953 Ferrari 500 Mondial. At the time, to make cars in line with the designer’s vision,
coachbuilders would create a reference template to determine the vehicle’s final silhouette. The metal sheets used – mainly aluminum at Ferrari – were shaped by hand, and “sewn” together. This beautiful piece of automotive art is a testament to the extraordinary level of craftsmanship that flourished at Ferrari between the 1940s and the 1960s. 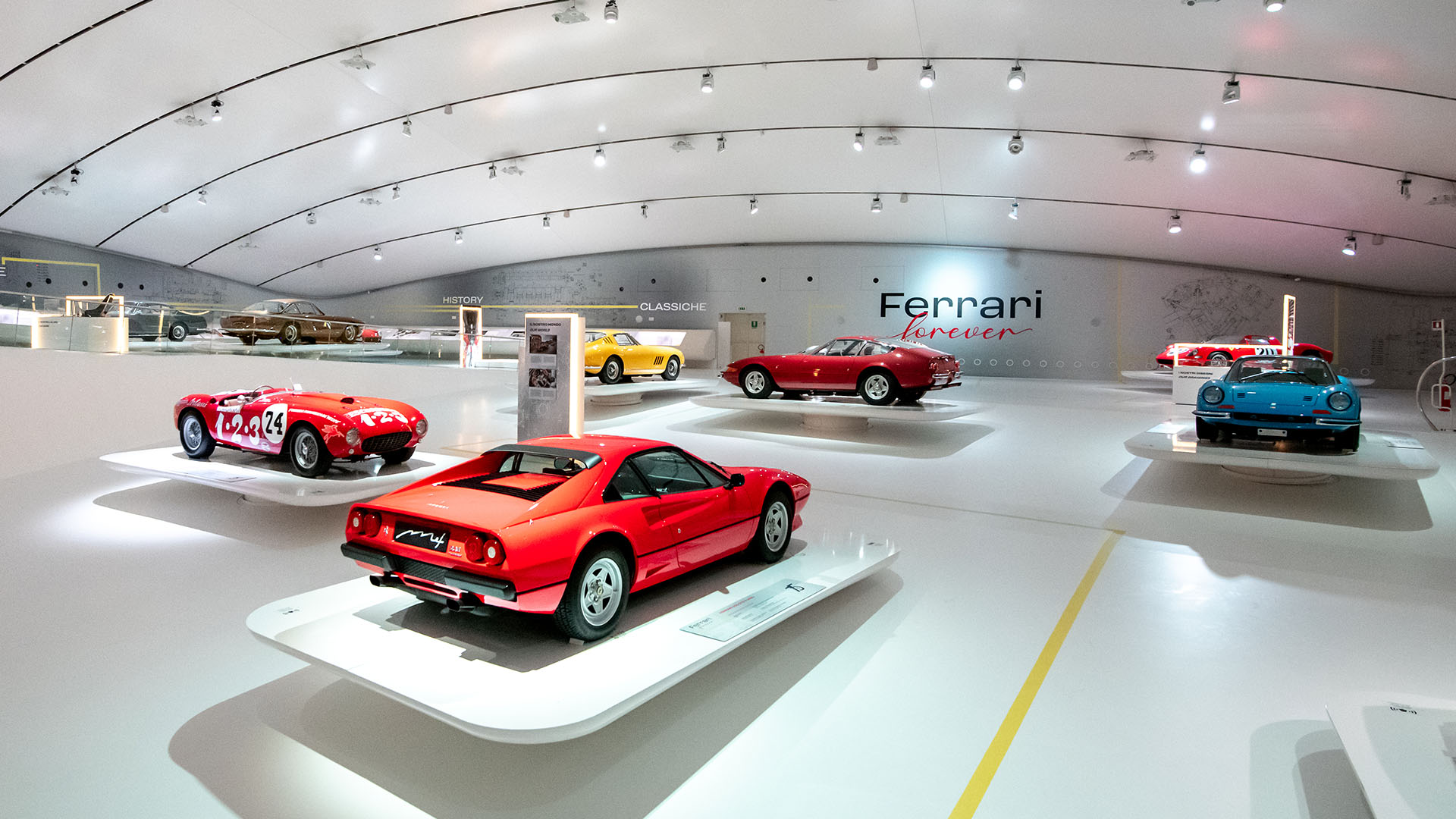 To mark its 75th anniversary, “Ferrari Forever” tells the story of a tradition of excellence that transcends time – one that will continue to innovate and evolve into the future. It will also serve as a reminder that every Ferrari has the innate potential to become a future classic. 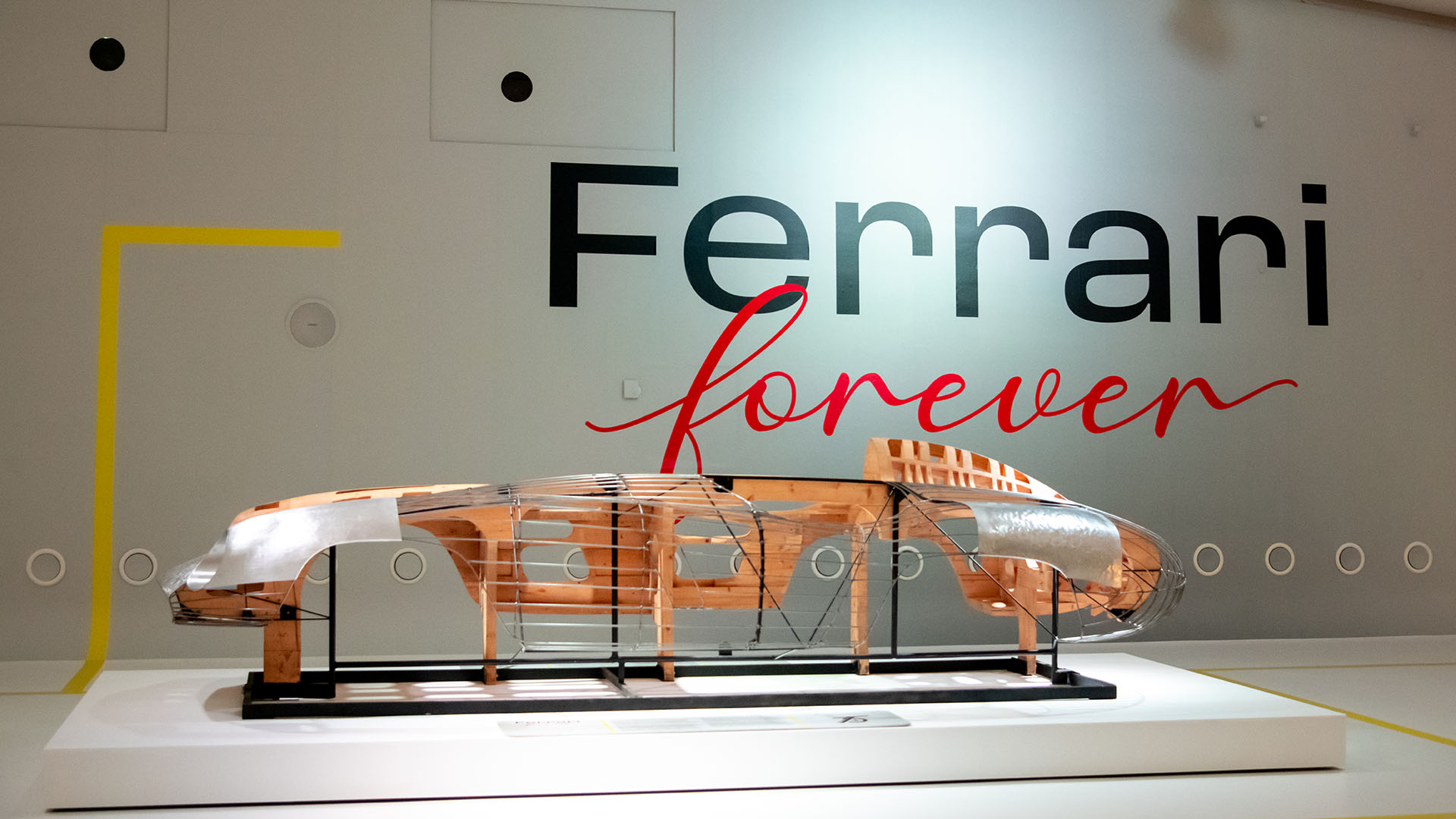 The exhibition will be open to the public at the Enzo Ferrari Museum in Modena from 12 March 2022 until 17 February 2023.