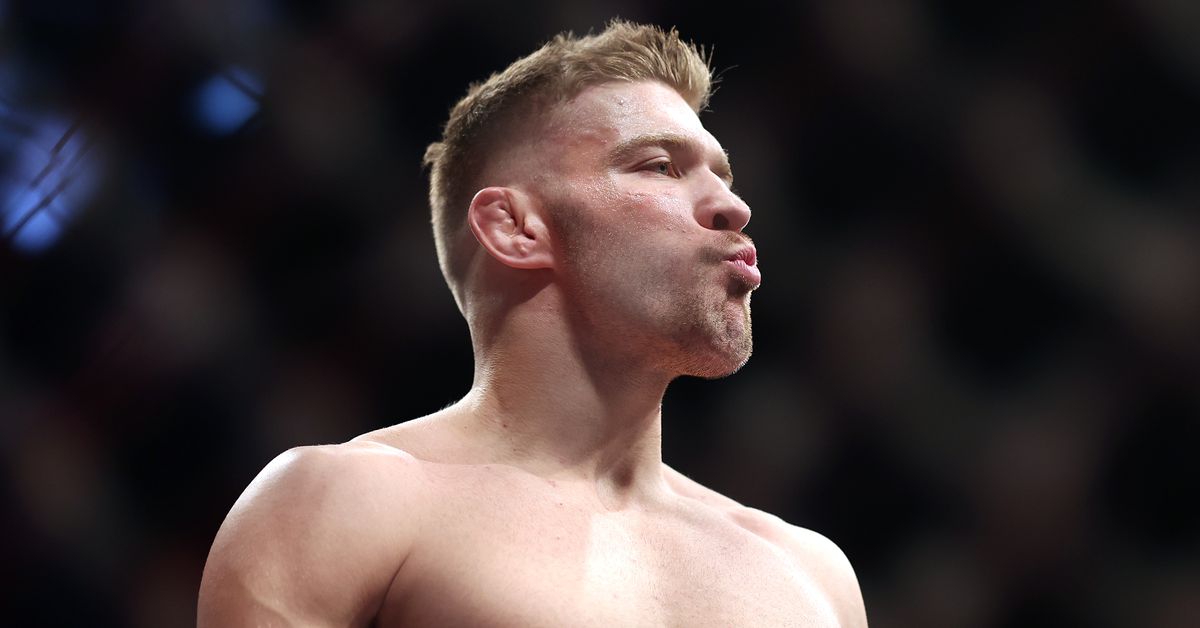 Following a third-round submission win over Darren Till at UFC 282, Dricus Du Plessis has his sights set on top 10 competition – and hopefully a title shot within the next year.

With a perfect 4-0 record inside the octagon, the 28-year-old fighter from South Africa wants to make a steady climb up the ranks as he looks ahead to a busy 2023.

While there are still a number of potential opponents awaiting him in the division, Du Plessis is keeping a watchful eye on what’s happening with the current title picture. Alex Pereira sits as champion after his stunning knockout win over Israel Adesanya in November. All signs are pointing toward an immediate rematch, with Adesanya seeking redemption after being ahead on the scorecards before Pereira stormed back for a fifth-round finish.

Du Plessis acknowledges he still has some work to do before earning a title shot of his own. But looking ahead, he doesn’t expect Pereira will still hold the middleweight title when he gets there.

“Probably Izzy or Rob Whittaker,” Du Plessis responded when asked who he believes will be champion when he fights for the belt. “That’s the two guys I see.

“I don’t think [Alex Pereira is still champion]. I think Alex is an amazing fighter. I think Robert Whittaker beats him. I honestly think Whittaker can beat Alex.”

Whittaker was largely considered the second-best middleweight in the sport for the past few years; he holds wins over almost every top fighter at 185 pounds. But he also has two previous losses to Adesanya.

Right now, Whittaker is gearing up for a showdown against Paulo Costa at UFC 284 in Australia. But Du Plessis believes if “The Reaper” gets the chance to face Pereira, he will walk away as the new middleweight champion.

“Alex is a big dude,” Du Plessis said. “I saw him again on Saturday. He’s big for the weight, but I do think his style, which is more of a flat-footed style, he punches like a truck and he kicks hard and his striking is really good. I just think when it comes to mixed martial arts as a whole, I think Robert Whittaker has a style to beat Ales Pereira.

“I think Whittaker is struggling with Izzy because maybe a mental block, and Izzy is really good at movement, so it makes it hard to take him down. He’s moving a lot, where I believe with Pereira, he’s a much more stagnant fighter. He stands in one spot with his feet planted, and he hits hard. I think that’s something that Whittaker will be able to take advantage of and take him down, and we saw when he’s on the ground and he’s put on his back, or he’s at the bottom, he’s not that great. I think Whittaker takes him down and TKOs or submits him.”

Before he can get to Pereira, Whittaker or Adesanya, Du Plessis first needs to better establish himself in the division so he can earn those types of fights with a chance to become champion. As he looks at the middleweight division and the fighters ranked ahead of him, he sees a couple of potential opponents that would make sense, especially as he targets an early 2023 return.

“Marvin Vettori has been saying he needs a fight,” Du Plessis said. “I would have loved to fight [Paulo] Costa, but he’s scheduled to fight [Robert] Whittaker. That fight’s not on the table. Even if they do make that fight, it’s probably going to be too late. He’s not going to fight in February and then again in March/April.

“Marvin Vettori wants to fight March or April. I would love that fight. Headline a fight night, that would be awesome.”

If Vettori isn’t available or not interested, Du Plessis will also keep a watchful eye on the upcoming UFC Vegas 66 card where Jared Cannonier faces Sean Strickland in the main event.

“It’s not that [Jared Cannonier] is bad or something, I just think in terms of hype and the potential of a great, great fight, I just think Strickland’s a better matchup. I think we can have a much more fun fight than I would have with Cannonier. If Cannonier was the guy, I’d be more than happy to fight Cannonier but Sean Strickland is a guy I believe I can beat very convincingly and I can do it in spectacular fashion. Just the way his style and my style compliment each other, it would make for a fun, badass fight.”