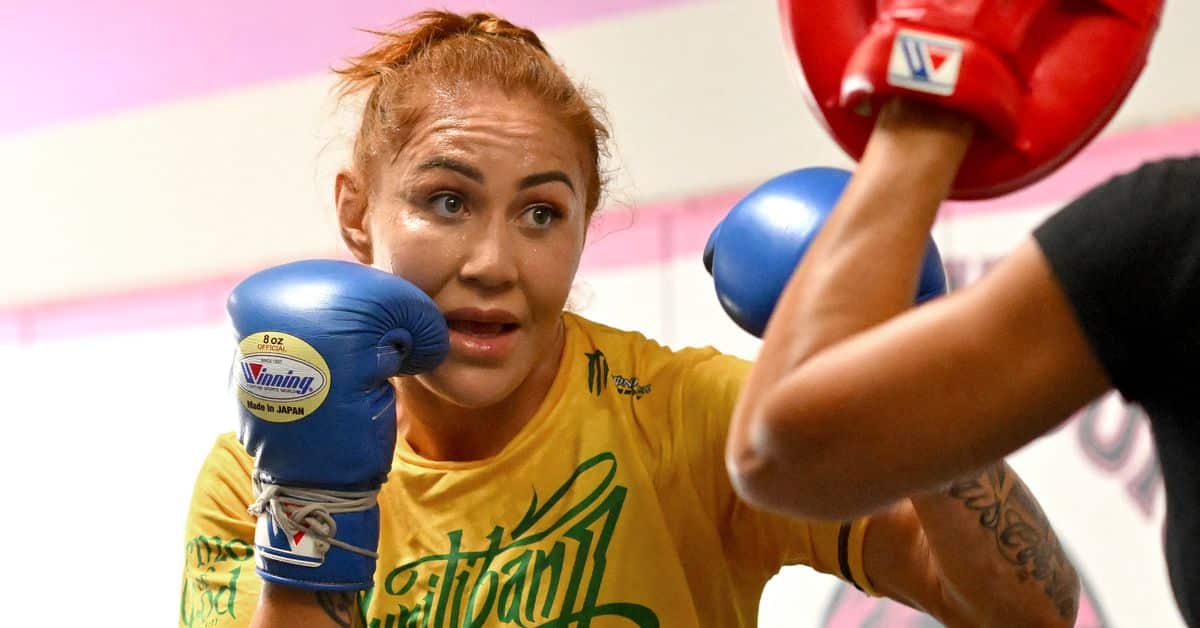 Soon-to-be MMA free agent and Bellator featherweight champion Cris Cyborg is scheduled to box Simone Silva at Fight Music Show 2 on Sept. 25 in Brazil. She plans to enter the squared circle one more time before the end of the year.

On this week’s episode of MMA Fighting’s Trocação Franca, Cyborg said she hasn’t made a decision regarding her future in MMA, but she’s leaning toward re-signing with Bellator. She also explained why she hasn’t left the sport to become a full-time boxer.

“I don’t know if there are many girls to box, but I want to defend my belt [in Bellatpr],” said Cyborg, who will compete in a 154-pound match. “I want to continue fighting MMA, but I know it’s hard to do both sports [at the same time], you have to focus on one or the other.

“If I have other opportunities [to box], absolutely. We’ll see. We don’t know about tomorrow. Let’s focus first on this one, and then we’ll see what the future holds, then I’ll know the answer to this question.”

Cyborg wants to end her MMA career in 2025, two decades after her professional debut. But it’s unlikely that she fights under MMA rules again this year.

“I believe I’ll do this boxing match and the next one will also be boxing this year,” she said. “Nothing is set, but I believe [this match] will open doors. There are rumors, and I believe it will open door for good things in the future.”

Reports indicated earlier this year that a match between Cyborg and multi-title champ Katie Taylor could be in the works for December. Cyborg said for her part, she’s down to dance.

“Who knows,” Cyborg said of meeting the 2012 Olympic gold medalist, who is 21-0 as a professional and has defended the WBA, WBC, IBF, WBO, and The Ring female lightweight titles. “Maybe fight her in her area [Ireland], right? They are crazy about the sport there, big fans really. Who knows. Or maybe in Brazil, right? We’ll see.”

Until then, the MMA legend focuses on making her boxing debut at the Athletico Paranaense soccer stadium in Curitiba, the same 45,000-seat venue where she made her octagon debut back at UFC 198 with a knockout over Leslie Smith in 2016.

“I know it’s a different sport,” she said, “but I’m training hard, excited and happy.”

Simone Silva holds a professional record of 17-22 in boxing and has shared the ring once against Amanda Serrano, but she enters the match on a nine-match losing skid. Winless in four bouts in 2022 after being knocked out by Jessica Camara in August, Silva is currently serving a 60-day medical suspension by the Texas Combative Sports Program.

Fight Music Show officials did not respond to a request for comments on Silva’s suspension. The Texas Department of Licensing and Regulation (TDLR) released a statement to MMA Fighting on Silva booking another match while still serving a suspension.

“Some countries honor TDLR and ABC medical suspensions and others don’t,” the statement read. “The safety of the fighters is our greatest concern, and if Da Silva returns to Texas for a fight, we will likely require that she undergo EEG and EKG testing to ensure she is able to compete safely.”

Cyborg admits she hoped to face someone with less experience in her boxing debut, but “my history in MMA wouldn’t allow it.”

“Much respect for her, she’s a pioneer in women’s boxing in Brazil,” Cyborg said prior to the news of Silva’s suspension. “She’s fought for the world title four times, has [39] professional bouts, so I respect her a lot. I’m glad she took the fight and I think it’s going to be a great challenge for me, too. It’s a different sport and she has also fought MMA before, so it’s going to be a great fight.”

Cyborg scored 20 of her 26 MMA wins by knockout but said it would be “fantasy” to expect a quick stoppage against a veteran.

“If it ends early, thank you very much and I’m glad it all worked,” Cyborg said, “but if we go eight rounds, I’ll put on a great, technical match, and give my fans a good boxing match.”