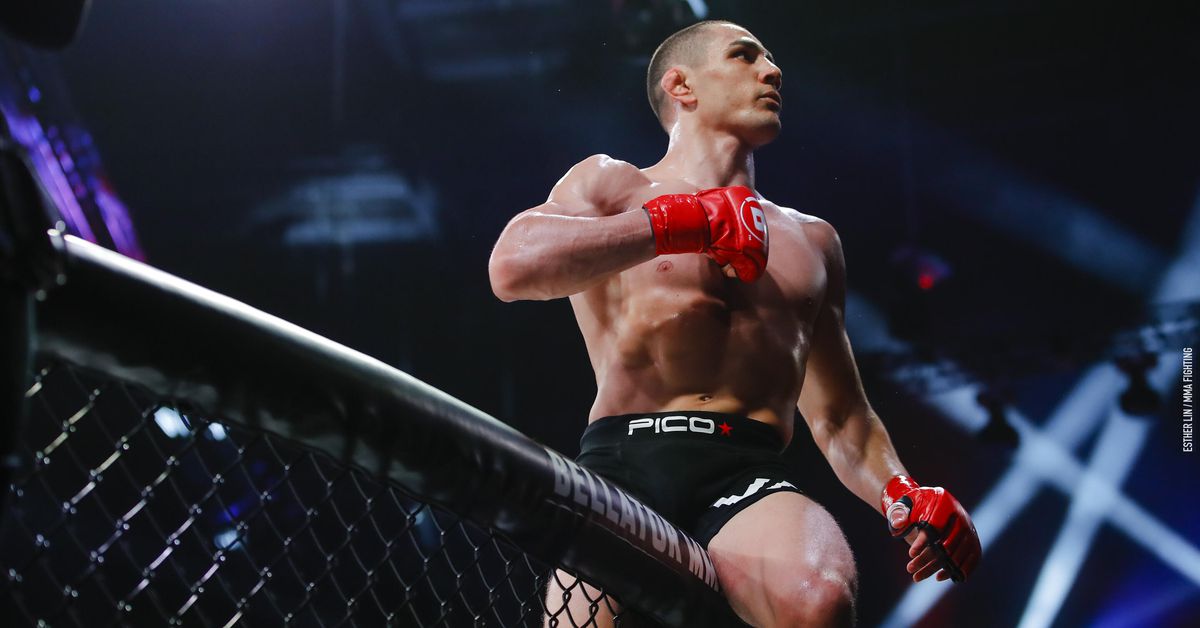 Three-time NCAA champion wrestler Bo Nickal might end up as the best MMA prospect in several years, and with only two fights on his resume. Nickal is already confident he could defeat UFC middleweight champion Israel Adesanya.

Right now, Nickal isn’t even officially on the UFC roster. But he’ll have his chance to secure a contract in the next installment of Dana White’s Contender Series, where he’s an overwhelming favorite to win his fight against Donovan Beard.

Nickal oozes confidence when he addresses his future in the sport. But if anyone understands how quickly hype and potential can come crashing down, it’s Bellator featherweight Aaron Pico.

“When I first came in and got my career started, I knew I had my work cut out for me,” Pico told The Fighter vs. The Writer. “The organization wanted me to be champion, and hindsight’s 20-20, I was rushed a little bit, but it’s very, very difficult.

“This sport is grueling on the body, mentally, and especially me being a perfectionist, I am so hard on myself. It keeps me up at night, and some mornings, I’m up early studying, trying to be a better fighter. By no means do I think I’ve arrived yet. It’s a very difficult sport, especially when you want to be great.”

Pico, who came up in wrestling around the same time as Nickal, acknowledges the Penn State wrestler has all the makings of a future champion. He also knows nothing is guaranteed in combat sports.

Much like Nickal, Pico was touted as a once-in-a-lifetime prospect, but he ran head first into more experienced competition, which resulted in a 4-3 record through his first seven fights, including a pair of brutal knockout losses.

While Pico praises Nickal’s potential, he also offers some friendly advice just based upon his own experiences.

“It’s just a different speed in there, especially with high-level fighters,” Pico explained. “The speed and the timing is a lot different.

“There’s no need to rush. Will you be a champion? The chances of him being a champion are very high, but there’s no need to rush. When that time comes, it’s going to come fast, and just make sure that you’re ready, because the competition it’s nice and it feels good when you beat these guys. But at the highest level, the speed and the reaction time is on a different level.

“You just need to adjust your eyes, get comfortable in the cage. You need to feel the crowd, the lights. One thing I always say is even the stuff that goes on before the fights — the media, where you stay at in the hotel, going through rehearsals — as much time as you can get, until you get the call to go to the big show, you should absorb it as much as you possibly can and not rush it.”

If he could go back to 2017, Pico would say the same to himself as he prepared to make his professional debutat Madison Square Garden in New York City, where he faced an 11-fight veteran.

“The advice I’d give to myself is that I’d tell myself I’m not ready to fight for a title,” Pico said. “I’m five, six years away, so let’s take the fights slow. Let’s build, let’s get better. Cause training camp, I fought quite a bit. Got done with training camp, take a few weeks off, and then right back into training camp.

“I didn’t really have time to develop and just be with a coach to say we’re going to work on this, this can happen, and it all changed for me when I came to Albuquerque and I started working with the coaches that I have now. I didn’t fight for almost a year, and I was with Greg Jackson and Brandon Gibson working every, single day working on fighting. I would just tell myself go to Jackson-Wink and maybe take a year off and just develop.”

Pico knows fighters all develop and evolve at different speeds, so maybe Nickal is truly ready to tackle the best middleweights in the world on his first day in the UFC.

“Everybody’s different,” Pico said. “For example, Daniel Cormier was 31 [when he debuted], but he was mentally probably beyond his year. He was 31-years-old, he had gone to the Olympics, he’s gone through life and I think he was probably ready and was mentally ready to take on those challenges.

“When I came into the sport, I was 20 years old, and my first fight was in Madison Square Garden against a guy that was 9-2, fought for an LFA title the fight before, so he’s a guy that’s been around the sport a long time. Mentally, I just wasn’t ready.”

As strange as it might sound, Pico wouldn’t erase those early losses in his career even if given the chance because those setbacks ultimately put him on the path he’s now now.

“I don’t take it for granted. You hear me say it, this sport is very, very difficult. It can change in a matter of seconds so I’m very focused, I take it very seriously and I think I’m in a good position.”